By this time next year we could see two "nationwide," low-band 5G wireless networks: one from T-Mobile in the 600MHz band and one from AT&T in the 700MHz band.

And there's a good chance that neither will offer the kind of mind-blowing speeds that some 5G proponents have been hyping.

T-Mobile has made no secret of its 5G plans. The operator has said that it will deploy nationwide 5G services by 2020 using its 600MHz spectrum. If the operator is successful in its bid to merge with Sprint, it will augment that effort with Sprint's 2.5GHz spectrum.

T-Mobile recently shared a map showing its low-band spectrum holdings (which span both 600MHz and 700MHz): 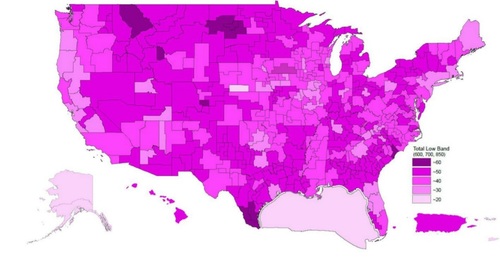 However, T-Mobile has never really defined what it means by "nationwide" 5G. It almost certainly doesn't mean geographically nationwide, simply due to the difficulty and expense of covering vast stretches of prairie in Texas and Montana, for example. It it also probably doesn't mean covering every single household in the country, for the same reasons. Instead, T-Mobile's definition of "nationwide" probably aligns with what AT&T and Verizon mean when they say "nationwide:" most people in most of the country's big cities.

All that said, AT&T's 5G plans are even murkier. The operator in January promised to offer nationwide mobile 5G services by "early" 2020 using "lower band spectrum (sub-6GHz)." Nationwide in AT&T's case means covering 200 million POPs (points of presence, which are roughly equal to people). Then, in April, the operator's CFO seemed to move those goalposts a bit when he said that "end of next year we will have over 200 million of our POPS covered on a 5G network."

But what remains unclear is what spectrum band or bands AT&T will use for its nationwide 5G offering. When AT&T says that it will use "sub-6GHz" that basically means it could use any of its existing spectrum holdings, from 700MHz to 800MHz to WCS at 2.3GHz.

Now, though, someone has stepped up with a solid theory about how AT&T will roll out 5G service nationwide. Brian Goemmer, founder of spectrum-tracking company AllNet Insights & Analytics, wrote recently that AT&T will probably use its 700MHz (A, B and C channel) spectrum licenses to offer nationwide 5G service. Specifically, he noted that AT&T owns 10-20MHz of this spectrum across roughly 313 million POPs, giving it the opportunity to cover a sizable chunk of the country's population with 700MHz 5G service. 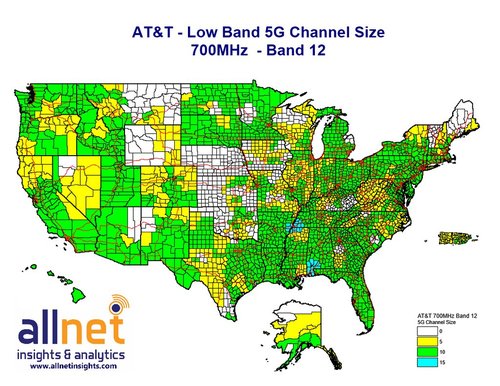 Already AT&T has said it has been working to refarm its low-band LTE spectrum for 5G, and has made some recent 700MHz spectrum license acquisitions.

Why this matters
5G remains a hot topic in the wireless industry, but so far most 5G deployments have been done using millimeter-wave (mmWave) spectrum. Such spectrum generally sits above 20GHz and is able to transmit huge amounts of data but cannot travel more than a few thousand feet. Thus, today's 5G mmWave networks from the likes of Verizon and AT&T only cover a handful of city blocks in a handful of large cities.

However, due to the physical propagation characteristics of low-band spectrum like 600MHz or 700MHz, operators like T-Mobile or AT&T could easily cover whole cities with just one cell tower. Thus, low-band spectrum will play a critical role in pushing 5G into more and more parts of the US.

The tradeoff though is that low-band spectrum can't transmit as much data as mmWave spectrum. For example, Verizon's mmWave 5G network has been averaging around 500Mbit/s with peaks above 1Gbit/s, while T-Mobile's CTO has acknowledged that 5G on the operator's 600MHz spectrum likely will clock in around 60-70Mbit/s. AT&T will probably see similar speeds on its 700MHz 5G network.

The Verizon factor
The one last unknown in all of this is how Verizon might take 5G nationwide. So far Verizon has only talked about its mmWave plans for 5G, but the operator has acknowledged that mmWave spectrum can't be used for broad coverage. That leads to the obvious question: What spectrum band might Verizon eventually use to deploy 5G nationwide? So far the operator has remained pointedly silent on the question.

And what of Sprint? The operator has been clear about its plans to deploy 5G on its 2.5GHz spectrum in nine major US cities, but has argued that it doesn't have the finances for any broader deployment.

We believe that 5G actually will not be a big deal for consumers - at least not in terms of moving the needle (except higher data speeds needle) when it comes to ROI for the carriers.

Other than IoT applications (supported by mMTC), other 5G categories will be all about business customers (enterprise, industrial, and government). A list of all 5G application categories includes:

In terms of what apps will be within these categories, here are some illustrative examples:

The 5G Applications Market is going to have much more reliance upon enterprise, industrial, and government customers, and many of them will go with private networks for their own facilities. Mobile Edge Computing will also be important in support of this market.

JDonahue 5/28/2019 | 6:17:30 PM
DSS Next year they'll all be using dynamic spectrum sharing which will make this more about who has used 5G ready equipment on existing 4G cell sites.
Reply | Post Message | MESSAGES LIST | START A BOARD
EDUCATIONAL RESOURCES