Huawei's IP Update Shows Why US Critics Are Scared

A recently published white paper from Huawei shows why it terrifies US opponents. After China abandoned efforts to develop "homegrown" mobile technologies in the days of 3G, the Chinese equipment giant muscled into international standards groups. Today, it claims a 10% share of the "standard-essential patents" (SEPs) used in 4G technology. But that figure has doubled to 20% in 5G, it says, citing data from the European Standards Telecommunications Institute (ETSI). Its "approved" 5G contributions make it the world's largest contributor, it boasts.

That's been a lucrative sideline for the company. Since 2015, Huawei has been able to extract about $1.4 billion in licensing revenues from organizations in the US as well as Europe and Asia. Like it or not, the US is helping to fund China's 5G research. Meanwhile, the US lacks any significant 5G infrastructure vendors of its own.

The purpose of the white paper, of course, is to prove that Huawei is a decent global citizen that respects others' intellectual property and plays fairly in multinational associations. To emphasize this point, Huawei says it has paid out roughly $6 billion in licensing fees in the last 20 years. Much of that may have flowed toward companies like Qualcomm, the US semiconductor firm whose chips power many of Huawei's smartphones.

But for how long? The recent inclusion of Huawei's name on the US "Entity List" forbade US companies from dealing with it. Although US President Donald Trump appeared to ease some restrictions after his weekend G20 meeting with Chinese ruler Xi Jinping, Huawei is spending more on R&D than ever before as it tries to become self-reliant (or, at least, not reliant on the US). HiSilicon, its own chips business, cranks out similar technology to Qualcomm's.

This does not mean Huawei's royalty payments to US firms will dry up if the underlying technology is based on US patents. Yet what cannot be denied is that Huawei's growing influence over international standards bodies has come at the expense of once-dominant Western firms. Recent data from IPlytics, an independent market-research firm, backs this up. Huawei tops rankings for 5G SEPs ownership, 5G technical contributions and attendance at 5G meetings (measured by number of attending employees), according to a paper from IPlytics published in April this year. 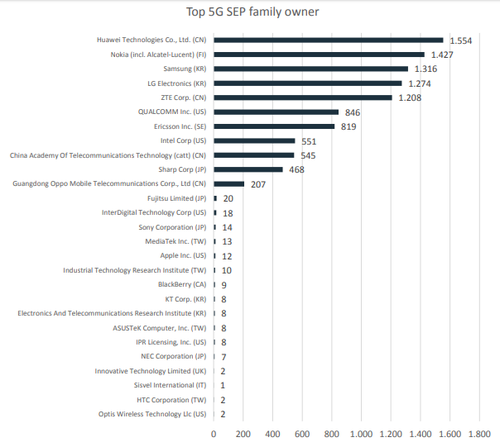 Besides investing more in R&D, Huawei admits to exerting its influence over the legislative process in China, where it has also recently sued InterDigital, a US owner of 5G patents, over royalty payments. That dispute appeared to center on the rates InterDigital charged for its intellectual property. While not confirmed, Huawei seems likely to be the company behind a similar Chinese case against Ericsson. In April, the Swedish equipment maker confirmed that its Beijing offices had been raided by Chinese officials after complaints were made about its licensing fees.

Huawei is also seeking about $1 billion in patent fees from US telco giant Verizon, according to a report last month from the New York Times. The negative publicity this generated seems largely responsible for Huawei's white paper on intellectual property. One source involved in litigation, who spoke with Light Reading on condition of anonymity, doubts Huawei's chances of a favorable outcome in the US court system. But he also doubts any Western firm would succeed against Huawei in a Chinese court. That is a worry given the size and importance of the Chinese market, and the current trade conflict between the US and China.

Standards groups are understood to be nervous about the ramifications of that conflict. If Huawei is so integral to 5G -- as the data suggests -- its misfortunes could slow down the 5G standardization process. Even worse would be a schism along geopolitical lines. The various regional technologies that once existed have coalesced into a single 5G standard, bringing convenience, economies of scale and business benefits for organizations inside and outside the telecom industry. All this could be undone in a worst-case scenario.

For the same reasons that China gave up on homegrown technologies, the industry will seek to avoid this bifurcation. If 5G is eventually used to connect billions of objects -- and not just the smartphones that have taken over in the 4G era -- the revenue opportunity for licensors of 5G patents could be massive. "The target market for licensing 5G patents will even increase since 5G patent holders will be able to extend their licensing program to various use cases beyond smartphones," says IPlytics. Both its white paper and Huawei's own show the Chinese vendor is well and truly in the hotseat.

opticaljunkie 7/1/2019 | 6:10:51 PM
Re: Not a numbers game How many suppliers were bullied into voting for Huawei proposals? ppl participating in those standard bodies know better.
Reply | Post Message | MESSAGES LIST | START A BOARD