Turns out US Secretary of State Mike Pompeo is a major AC/DC fan. Which is handy, really, because one of the Australian band's most famous lyrics works just as well during the morning shower routine when tweaked to reflect his political agenda. "I'm sending Huawei to hell," one can picture him singing as he performs his ablutions.

Back on the road, Pompeo's efforts to banish Huawei from Europe, and send it back to that vile Chinese hellhole from whence it sprang, are not going so well. In eastern Europe last month, he got the sort of cold, unsmiling reception typically given to a meddlesome in-law at a family gathering. Germany, a massive Huawei fan, then declined with Teutonic politeness to exclude the Chinese vendor from its 5G market, instead offering to tighten up security checks on all equipment suppliers. The European Parliament has been more accommodating, griping about Chinese involvement in 5G networks this week. But other bits of the byzantine European bureaucracy prefer Germany's approach. 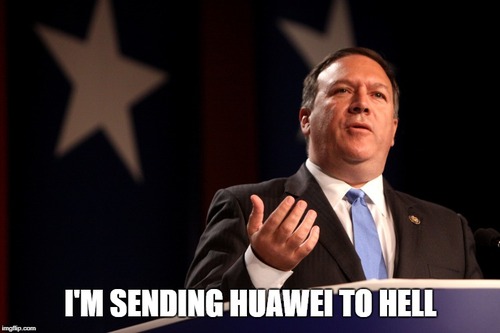 These knockbacks, and signs that more lie ahead, have brought the stew over Huawei to boiling point. Either something lowers the temperature or the whole affair could spill over, damaging international relations and world trade.

Right now, the UK is one of the most combustible ingredients. If its forthcoming supply chain review decides to ban Huawei, then BT, Vodafone and Three would potentially face billions of dollars in replacement costs. The rollout of 5G could fall two years behind schedule, according to Vodafone, endangering the UK's competitiveness just as it starts a new life outside the European Union (EU).

But not banning Huawei could be equally bad. The US has already threatened to withhold important intelligence from Germany if it carries on using Huawei -- the kind that might prevent a terrorist attack, say. British spooks must be terrified of ending up on the same naughty list. As a member of the "Five Eyes" intelligence-sharing alliance, the UK is far closer to the US on spying matters than Germany. Stumbling out of the EU without a deal -- a growing possibility after the latest political fiasco this week -- could make it even more dependent on the US for critical intelligence, at least in the short term.

In the event of a "no deal" Brexit, the UK will also be desperate to forge trade alliances with other countries. UK Prime Minister Theresa May, or her successor, will be snuggling up to US President Donald Trump, begging like a Dickensian urchin for some more trade (please, sir). With Pompeo's modified AC/DC lyrics ringing in his ears, the "Orange One" could always withhold a favorable deal unless the UK dumps Huawei.

That would mark a serious escalation of the dispute, and probably end any hopes of Trump trotting to the rescue, as he did last year when ZTE, a smaller Chinese vendor, was in similar trouble. Yet there is still no sign he is prepared to intervene over Meng Wanzhou, the senior Huawei executive accused of covering up business deals in Iran. If she is tried and found guilty, there is already a precedent for punishing companies that violate trade sanctions: ZTE's access to vital US components was blocked last year until Trump's intervention.

"Banning Huawei could lead to an actual shooting war between superpowers," said Michael Genovese, an equity analyst covering optical components for MKM Partners, in a research note this week. China could retaliate by threatening US access to Taiwanese-made semiconductors, he says. Others believe its response would focus on other industries where the US is more heavily dependent on trade with China. Helen Lamprell, Vodafone UK's general counsel, is just as alarmed as Genovese by suggestions the US could smash up the supply chain. "A ban would be massively disruptive around the world and have a very negative effect," she said during a recent press briefing.

Perhaps that will stay the US hand of execution. Concerned as he is, Genovese downplays the risks. "We think Huawei is unlikely to be banned because Huawei and China have leverage as well," he says. Lamprell is similarly dismissive. What no one really knows (outside a few inner circles) is just how Chinese President Xi Jinping persuaded Trump to drop the knife pressed against ZTE's jugular. Trump's acolytes would hardly want his fans to know that Chinese trade threats figured in the discussions.

Even if they did not, China is undoubtedly prepared to play hardball over Huawei, a much stronger force than ZTE on the global tech stage. Ever since Trump entered the White House, US complaints about China's unfair trade tactics and theft of US innovation have been unceasing: But those criticisms stretch back much further and many are not without supporting evidence -- as mentioned previously, the actions of some Huawei staff over the years have often added fuel to the fire.

With the recent twists in the Huawei affair, the world has now reached the point where the US is forced somehow to pull back from the brink -- or get ready for all-out conflict.

If the US weren't so totalistic about it this would work a whole lot better.