Getting to sleep when you're a rotating chairman can't be easy. But if it's not dizziness then what else keeps Huawei's Eric Xu awake at night?

Plenty, it would seem. What with his CFO under house arrest in Canada, his business facing exclusion from 5G markets and the risk of a ban on Huawei's purchase of US components, there is no shortage of potential crises to occupy his thoughts. (See Huawei Hits Out at DoJ Amid Global Backlash and Huawei Muscle Puts Ericsson, Nokia on 5G Back Foot in Europe  Sources.)

But CEOs are paid to find answers -- not dwell on problems -- and for Eric Xu the answer appears to be the successor to 5G. "What's in my mind right now is 6G," he told reporters at Huawei's latest press event in Shenzhen. "I anticipate that by 2028 or 2029 or 2030, we are going see 6G as extensively discussed as we are seeing 5G today."

It's Dizzying at the Top 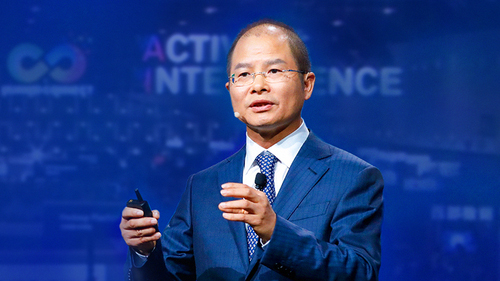 The mere mention of 6G could prompt groans from anyone who has lived through several generations of mobile technology. The 5G hype machine is now running at full throttle as industry executives prepare to head to Barcelona this month for the latest Mobile World Congress. It's a familiar feeling. And yet none of these generations has paid off for the industry in the way everyone hoped. (See MWC 5G-Gasm Risks Missing the Big Telecom Issues.)

Perhaps 5G will be different. But for Huawei Technologies Co. Ltd. it threatens to be the most troublesome generation yet. Because it could permeate everything from medical devices to weapons systems, spooks worry about using a 5G supplier aligned with an anti-Western superpower. US authorities, locked in some titanic technology fight against China, have gone directly for Huawei's jugular, charging Meng Wanzhou, the company's chief financial officer, with fraud. A ban on Huawei's purchase of US components -- a weapon previously used against ZTE Corp. (Shenzhen: 000063; Hong Kong: 0763), a smaller Chinese manufacturer -- could be crippling. (See 5G Stuck in Slow Lane Beyond Consumer Biz and Amid the rubble of L'Aquila, ZTE tries to rebuild.)

The biggest risk is the balkanization of the telecom industry, as companies retreat behind the walls of their own enclaves. Shut out of Western markets, Huawei and ZTE would carve up parts of Asia and Africa. Already largely unchallenged in the US, Ericsson AB (Nasdaq: ERIC) and Nokia Corp. (NYSE: NOK) would have free rein in Europe. Yet their activities in China could be seriously curtailed. Just ask Apple Inc. (Nasdaq: AAPL), which is now struggling to shift iPhones in Beijing and Shanghai partly because of anti-US sentiment, according to analysts. (See Huawei's Ills Don't Guarantee Good Times for Ericsson, Nokia and Apple Up as Markets Dwell on Bright Side.)

But one day, when Trump has retired from politics and the telecom dark ages are a distant memory, a new era of empire building will begin. And if that happens in the mid-2020s, when Trump's absence from the White House will be a certainty (barring any constitutional amendments), then 6G could be the talk of telecom at the time. The companies that can dominate this technology would be the new Caesars.

It's not hard to envisage a long-term strategy behind Eric Xu's remarks. Ren Zhengfei, the company's founder, previously warned staff that Huawei might have to cede ground and sacrifice employees under the US-led onslaught. Like King Alfred in the marshes, hunkered down after a Viking advance, it would need to plot its eventual comeback. (See Huawei Founder Warns of Job Cuts  Report and Huawei Founder Fails to Put Minds at Rest.)

Of course, Huawei hasn't just thrown down its 5G sword and decided 6G is all that matters. "The research effort for 5G would be basically completed by 2019, and our research teams will be looking at questions such as how mobile communication technologies would evolve in the future," Eric Xu told reporters in Shenzhen. "For every new generation of technologies, some companies cannot follow up, and some companies will emerge even stronger."

In other words, shifting resources into 6G makes sense -- regardless of the latest geopolitical clashes -- because 5G is moving out of the labs and into the field. The future worry for Huawei's Western rivals is twofold: First, that Huawei has played a bigger role in the 5G standard than it did in 4G development, and will be even more determined to "own" 6G; and second, that China's R&D muscle, even after the US attacks, remains Schwarzneggerian.

Indeed, while any retreat from Western markets might weaken Huawei, the R&D gap between the Chinese vendor and its non-Chinese rivals is vast. Huawei has yet to publish full details of financial results for 2018 but is likely to have spent at least $15 billion in R&D -- more than Ericsson, Nokia and Qualcomm combined. (See Huawei Dwarfs Ericsson, Nokia on R&D Spend in 2017.)

Not everyone is convinced 6G is a serious R&D commitment right now. Pio Suh, the managing director of a cellular patents owner and advisory company called IPCom, is skeptical there is more to Huawei's latest remarks than marketing. "We still have engineers going to 3GPP conferences and innovating and developing technology in 5G," he says. "Before that we cannot think of 6G."

But even if Huawei is spending only its loose change on 6G today, its desire to be an intellectual property heavyweight in mobile makes perfect sense in a balkanizing global market. Arbitration could be one of the main battlefields for companies on either side of a big trade dispute as countries line up their legal artillery. "China has recently set up some dedicated patent courts and is trying to establish itself as a country where you can litigate," says Pio Suh.

What's more, intellectual property in the cellular industry could become a huge business opportunity with the transition to 5G and 6G, as connectivity moves from billions of smartphones to potentially tens of billions of other consumer and industrial gadgets. "Different industries coming into the market will have an impact on licensing because we'll be dealing with auto makers, medical equipment manufacturers and other industries unaware of IP [intellectual property] licensing issues," says Pio Suh. One opportunity for his own business, he says, is to educate those organizations about the risks associated with patent assertions.

6G uncertainty
What no one really knows -- what no one can really know -- is just how game-changing 6G will be. Clearly, not all generations are equal. 4G, for instance, was very much a successor to 3G that dealt successfully with that generation's shortcomings. 5G, according to its fanboys, will be a long jump into low-latency applications, edge computing and even artificial intelligence. Hence all the geopolitical fuss.

Should 5G live up to its promise in Release 16, the next 3GPP update, then 6G might end up being one of the evolutionary updates rather than something that truly revolutionizes telecom. Half-jokingly, Neil McRae, the chief architect of the UK's BT, said about a year ago that -- if 5G is good enough -- there will hopefully be no need for 6G. The serious point in there is probably that operators do not want the grand 5G redesign to be followed by another epic 6G overhaul just a few years later. Not, anyway, if it means outlandish spending on equipment and spectrum, and zero change in annual sales. And that is the usual pattern. (See When Will 6G Arrive? Hopefully Never, Says BT's McRae.)

What exactly is going on in Huawei's 6G labs is anyone's guess (for an analysis of 6G featuring input from various stakeholders, see this story on our sister site Telecoms.com), but the next next-generation standard could well take advantage of technologies like quantum computing, which would be exponentially faster than today's IT. In that eventuality, 6G wouldn't be a case of just rebuilding the 5G house. It would mean knocking it down and erecting a diamond-encrusted palace in its stead. For Huawei's rotating chairman, it's enough to make the head spin.