LONDON -- Huawei Technologies expects revenues from its telco customers to grow faster in 2019 than in the past couple of years, despite the current security-related challenges it faces in multiple markets, the head of the vendor's Carrier Business group stated during a pre-Mobile World Congress 2019 media briefing at London's Savoy Hotel today.

Responding to a Light Reading question about the impact of recent security-related pressures on Huawei's telco network business, Ryan Ding said the Carrier Business group had faced a couple of tougher years in 2017 and 2018, with year-on-year revenue growth coming in at 2% to 3%.

However, despite the current pressures the business faces in certain countries, Ding said he expects Carrier Business sales growth to improve in 2019, mainly due to the impact of 5G-related sales. He did not, though, provide any indication of what level of sales growth is expected.

Ding added, somewhat tongue in cheek, that recent developments had improved global awareness of the Huawei brand and that the criticisms faced by the company had strengthened its resolve to boost investments and be even more motivated to develop better products to meet the needs of customers.

"We believe this [security] misunderstanding will last for some time yet," but that Huawei would invest in R&D and expect to emerge with "even greater business momentum," he stated. 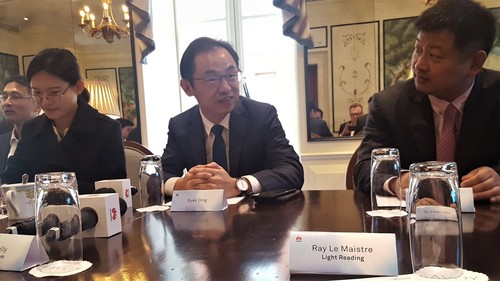 Across its entire business, Huawei reported unaudited revenues of $108.5 billion for 2018, up by 21% year-on-year according to the vendor's own (and somewhat questionable) calculations. It has yet to break out its sales by division, something it does in its annual report issued usually around the end of March. Historically its carrier business has been its biggest division by sales but that might change when it publishes its detailed 2018 report. (See Huawei Expects 2018 Revenues of $108.5B and Have Devices Overtaken Networks as Huawei's Biggest Unit?)

5G sales boost
While 5G is still in its infancy, the main mobile network infrastructure vendors are all battling to claim market leadership of some sort and, in one way or another, are set to generate 5G-related sales in 2019. In a broad presentation to industry analysts and media here in London today, Ding claimed Huawei currently has more than 30 commercial 5G deals, including 18 in Europe, nine in the Middle East and three in Asia Pacific.

None of the customers involved in those deals have yet been named, though, something that key rival Ericsson is at pains to highlight: Earlier this week the Swedish vendor claimed to have the most referenced commercial 5G deals, having named 10 customers that have signed contracts for either 5G core or radio access network (RAN) products (or both). (See Ericsson: We Have the Clout for a Huawei Swap-Out.)

Ding hinted that Huawei would be naming 5G customers during the MWC event in Barcelona, though such announcements are more likely to be swallowed in the overwhelming tsunami of industry announcements that are made during that week.

Samsung and ZTE are also challenging for 5G core and RAN technology business, while there are early signs that, in time, other companies might eat away at the revenues of traditional network equipment suppliers, with Japanese greenfield network operator, for example, opting to use virtualized RAN technology from Altiostar alongside disaggregated access network elements from Nokia in its ground-breaking architecture. (See Rakuten Sets Cloud-Native 5G Template, Disrupts Japan's Status Quo.)

Huawei, though, is currently dubious about the economics and efficiencies to be had from such alternative approaches to the radio access network. (See White Box Doubts Keep Huawei on Outside of O-RAN Alliance.)

Cloud 4G 2/20/2019 | 3:05:17 PM
Re: Is Huawei a security breach? The US NSA was reported to have broken into Huawei and taken files including source code according to slashdot.  I do not consider a blog article about what came out of Snowden's release of NSA data as reliable unless it was confirmed by multiple sources.  However, if I ask myself if this fits within what is generally understood about the breadth of NSA's activities and what can be initiated by US-based companies, I have to say 'it's in their bailiwick'.

Long-term developments require long-term efforts.  The US should recount our own targeting of railways, highways/roads, space, and other research programs and use the ability to make changes.  That requires a well-informed government with the political will to set long-term priorities.

I have yet to read of any documentation that a back-door to Huawei or ZTE servers exists.  Huawei has submitted their equipment and source code to government authorities in Germany, and Saudi Arabia.  There may be more than I found. No government has disclosed back-doors or other security concerns that are unusual,  Huawei has had a strong presence in Africa, the Middle East, parts of Asia outside of China, India, the other 'Americas'.  Some countries/regions were slow to adopt 4G compared to the more developed countries.  The release of spectra also helps the case for deploying of 5G.

Huawei's push into 5G has been on among the top 5 on their list for 5, 10 year+ development plans.  Now that 5G is almost a fait accompli, China is pushing efforts in the closely related field of Artificial Intelligence (AI), autonomous vehicles that can take advantage of the universal platform that has low latency and jitter in addition to fiber-cable replacement level bandwidth.

Security is a serious issue for the US and all countries. I think this would be held similar to Germany's stance: 'don't (necessarily) trust, instead verify' and let the market decide the fate of suppliers.  The issue of the USA no longer being among the top five+ equipment suppliers can only be addressed on a long-term diligent basis.  If we fool ourselves into thinking otherwise, then we have no hope of catching up in that arena.

lecastro 2/20/2019 | 2:42:07 PM
Is Huawei a security breach?
the market has doubts about the security breach that Huawei can generate but I have not seen a specific case that demonstrates that
Reply | Post Message | MESSAGES LIST | START A BOARD

[email protected] 2/20/2019 | 1:29:35 PM
Irony alert With so much focus currently on whether Huawei might be an agent of the Chinese state and in some way provide access for third parties to communications networks around the world, it was somewhat ironic that the entrance to the Huawei pre-MWC briefings at the Savoy Hotel in London today were through the back door entrance...

I laughed. Others not so much, but...
Reply | Post Message | MESSAGES LIST | START A BOARD
EDUCATIONAL RESOURCES