Ericsson: We Have the Clout for a Huawei Swap-Out

LONDON -- Ericsson has hit back at criticism that it lacks the resources to replace Huawei in European telecom networks should regional authorities ban the Chinese vendor from their equipment markets.

Arun Bansal, Head of Market Area Europe & Latin America at the Swedish vendor, dismissed as a "myth" the recent suggestions that Ericsson lacks the manpower and product portfolio to cope with a swap-out.

His rebuttal comes days after a major European operator told Light Reading that neither Ericsson nor Finnish rival Nokia had the products, stock and resources to be a substitute for Huawei, which overtook Ericsson in 2015 to become the world's biggest supplier to communications service providers globally. (See Huawei Muscle Puts Ericsson, Nokia on 5G Back Foot in Europe  Sources.)

The Chinese vendor is at risk of being excluded from some European markets because of government concerns that its equipment could include spyware used by Chinese authorities. (See Huawei Pledges $2B to Address Security Concerns, Appease the Brits, How the West Can Hurt Huawei and Where Huawei Fears to Tread.)

"That is a myth," said Bansal when quizzed on the issue of manpower at an Ericsson pre-MWC briefing event in London this week. "There are more than 35,000 people employed in Europe, which is by far the largest number in any region." 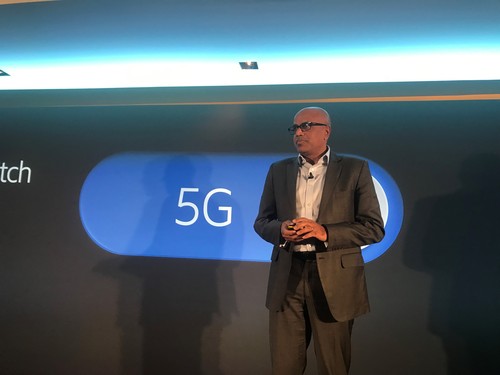 Arun Bansal, the head of Ericsson's business in Europe and Latin America, addresses analysts and reporters at an event in London.

That figure includes about 14,000 engineers, Bansal revealed during a presentation to analysts and reporters about Ericsson's 5G activities in the run-up to this year's Mobile World Congress, which starts next week in Barcelona.

Ericsson's financial reports show there were a total of 95,359 employees across the entire organization at the end of last year, with just 10,000 in North America, nearly 37,000 in Asia and more than 44,000 serving Europe and Latin America. Around 4,300 employees were based in Africa and the Middle East. (See Ericsson Opens Largest Training Center in US for  You Guessed It  5G.)

Staff numbers have fallen by around 16,000 in the last two years, with the Swedish vendor battling to restore profitability after a sequence of quarterly operating losses that finally ended in the second quarter of 2018.

Ericsson spokespeople pointed out that resources needed for site deployment would typically include local site contractors. Such resources were recently flagged as a constraint in North America, where several operators are moving quickly to build out new 5G networks, but Ericsson says this affects all vendors active in that market. (See Ericsson Hails First Annual Sales Growth Since 2013 as 5G Comes Calling.)

"Right now, the pace of build is high and that means third-party tower crews become a constraint for everyone," Helena Norrman, Ericsson's chief marketing officer, told Light Reading at this week's event. "You need to get access to them, but the problem is availability, not access."

Unsurprisingly, Bansal also took issue with the comments made by a senior telco executive that Ericsson did not have the product portfolio to replace Huawei.

The figure of ten "commercial deployments" refers to signed 5G contracts with named operators -- four in Europe, four in North America and two in the Asia-Pacific. Bansal hinted there are other 5G contracts that remain confidential and said Ericsson has now signed 42 memorandums of understanding (MoUs) with operators relating to 5G work. 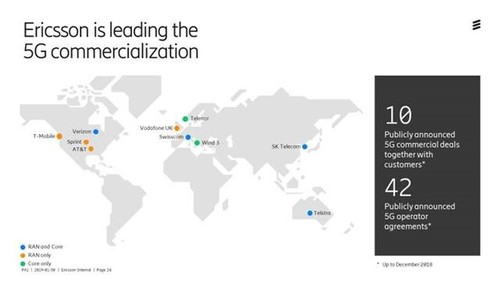 Nokia this week claimed to have signed 20 5G deals worldwide and said it was "approaching 100 engagements," while Huawei recently told reporters it had signed 30 5G contracts in total.

Although Bansal insisted Ericsson had the resources to handle a sharp increase in the European workload, he said the scenario was "hypothetical" and played down the likelihood of a Huawei swap-out across numerous markets and a rapid switch to 5G.

"Many customers do not have the spectrum today," he said. "It is hard to speculate that every single operator in every single country in Europe will go for 100% 5G rollout within one year."

Bansal said Ericsson's international experience proves it is not resource constrained. "If you look at the whole of Europe there are roughly 400,000 basestations. China alone has 2.5 million and Ericsson has roughly 15% market share, so we've been able to do 300,000 sites," he said. "The US is roughly the same number of sites as Europe and we have more than 50% market share."

Ericsson has already done swap-outs in Italy, where last year it replaced China's ZTE as a supplier to Wind Tre, and Germany, where it dislodged Nokia in 2017 as a vendor in Deutsche Telekom's radio access network. The Italian job has involved swapping out 8,000 sites over a period of 12 months, while in Germany it has taken 18 months to replace Nokia at the same number of sites, according to Bansal. (See Amid the rubble of L'Aquila, ZTE tries to rebuild and DT Ditches Nokia From Its German Radio Access Network.)

In a blog published this week, Barry French, Nokia's chief marketing officer, also took issue with suggestions a Huawei ban would hinder Europe's rollout of 5G networks. "5G is not a proprietary technology owned or dominated by any single company," he said. "For this reason, the absence of any single vendor in a particular country or countries should not affect the speed of 5G rollouts in Europe or anywhere else."

Like Bansal, he flagged spectrum availability as one of the big issues in Europe. "We continue to encourage every country to make 5G spectrum available quickly and to ensure that it is affordable," he said. "As that happens, Nokia will be ready."

Ericsson CEO Börje Ekholm has similarly written a blog insisting there is no risk European operators will fall behind on 5G because they lack access to the right technology. "Instead, it is lack of spectrum, high spectrum fees and heavy regulation that is blocking progress," he said. "For example, spectrum auctions have not even been held in the majority of European countries."

Branded the Ericsson Operations Engine, the AI was launched several weeks ago and allows network operations staff to request information from a chatbot about network performance and potential risks.

Peter Laurin, the head of Ericsson's managed services business, said the technology was developed in partnership with operators including Japan's SoftBank and would bring cost savings for Ericsson customers.

Asked about the impact on staff numbers, Laurin said the AI technology was partly responsible for a sharp headcount reduction within Ericsson's managed services operation. "We are 28,000 [people] now and we were 36,000 a year ago," he said.