Allowing Huawei a role in the UK's 5G networks would improve security in a market that has become too reliant on a few big players, a committee of UK politicians has advised the government, while urging the next prime minister to quickly reach a decision on the controversial Chinese vendor.

In a lengthy statement published Friday morning, the Intelligence and Security Committee (ISC) has backed arguments made by the UK's National Cyber Security Council (NCSC) that "diversifying suppliers" would be the best safeguard against security threats. It has also warned the government that an "unnecessarily protracted" debate about Huawei has damaged the UK's international relationships, and that restrictions on 5G suppliers will have "consequences... in terms of time and cost."

The Department for Culture, Media and Sport (DCMS) was expected to reach a decision about Huawei's involvement in the UK's 5G networks earlier this year, but its supply chain review has been delayed by various political developments, including the resignation of Theresa May as prime minister and the US move to impose trade restrictions on Huawei.

US hardliners pushing for a complete 5G ban on Huawei say it has close links to the Chinese government and that its products may include "backdoors" for Chinese spies -- charges the vendor has repeatedly denied. The UK has come under heavier US pressure than other European countries because it is a member of "Five Eyes," an intelligence-sharing group that also includes Australia, Canada and New Zealand.

Australia and New Zealand have already imposed restrictions on Huawei, and Canada is now weighing its own decision.

While the ISC's latest intervention is a potential boost for Huawei, any recommendation against a full ban is likely to encounter resistance from UK intelligence officials who see Chinese vendors as a cybersecurity threat. The fear is that China's government would be able to gather intelligence on the UK or even bring down critical infrastructure linked to 5G networks.

Any decision will be a difficult one for either Boris Johnson or Jeremy Hunt -- the remaining candidates for the job of prime minister -- as they seek to negotiate favorable trade agreements with China and the US following the UK's decision to quit the European Union. 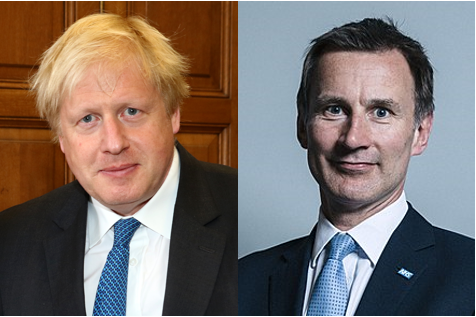 Boris Johnson (left) or Jeremy Hunt will have to make a quick decision about Huawei, say UK politicians.

In its statement, the ISC describes the NCSC's position on supplier diversification as "eminently sensible" and argues that locking out Huawei would make operators far more reliant on Ericsson and Nokia, to the detriment of security. Its rationale is that a network dependent on just one vendor would be less resilient, and that greater competition between suppliers "will force them to improve their security standards."

Currently, all four of the UK's mobile network operators use Huawei to varying degrees. BT, the former state-owned monopoly, is the only one that uses Huawei's products in its mobile "core," a supposedly vulnerable area that is effectively the network's brain. However, in accordance with an internal policy, BT is stripping Huawei out of the core and will eventually switch to products from Cisco, Ericsson or Nokia -- a transition it does not expect to complete until 2021 or 2022.

Earlier this year, the DCMS was thought to be in favor of banning Huawei from the core but allowing it to provide radio equipment. The ISC now says notions of the core and the "edge" -- the part of the network close to end-user devices -- are misleading, and that authorities need to think about the sensitivity of individual functions and not where they are located.

Some experts reckon 5G will blur the distinction that has previously existed between the core and the radio access network. "5G architecture will make it hard to say where the intelligence is sitting and where is the connectivity," said Arun Bansal, the head of Ericsson's business in Europe and Latin America, during a conversation with Light Reading in June. "That boundary will disappear in 5G simply because of the way the architecture will be done, and it will be hard to say this is core and this is radio."

While BT, Telefónica and Three already use a multitude of radio suppliers, Three -- the smallest of the four -- has picked Huawei as its sole 5G vendor. That could leave it in a difficult position if UK authorities do require any operator to have more than one 5G supplier.

Asked for his thoughts on the DCMS review before the publication of today's ISC statement, Victor Zhang, Huawei's head of global government affairs, said: "From the government perspective, the whole UK needs to have a resilient network and a multi-vendor environment. That is a benefit for encouraging competition and innovation."

Zhang told Light Reading that European operators had continued to use Huawei to launch 5G services despite the ongoing debate around security. "In total we have already invested $4 billion to build our leading position in 5G and also to support customer requests and that is why customers still choose Huawei for launching 5G." Huawei currently boasts 28 commercial 5G contracts in the European market.

Nevertheless, the ISC is clearly uneasy about the UK's heavy reliance on Huawei and the consolidation that has taken place in the equipment market in recent years. "One of the lessons the UK government must learn from the current debate over 5G is that with the technology sector now monopolized by such a few key players, we are over-reliant on Chinese technology -- and we are not alone in this," says the statement. "We need to consider how we can create greater diversity in the market."

Alluding to the "geostrategic" ramifications of any Huawei decision, the ISC also tried to address concern that government restrictions would meet with Chinese retaliation. "The Chinese government would not allow a British company to play a similarly significant role in China's critical national infrastructure -- and they will understand if the UK decides to follow their example."

The full statement can be read here.