A 5G ban on Huawei would risk dealing a further blow to profits in Europe's mobile phone markets by reducing competition in the equipment sector, according to an executive at one of the region's incumbent telcos.

Mikaël Schachne, a vice president at BICS, warned that restrictions on Huawei could have unpleasant knock-on effects. "It could be that it will reduce competitiveness in the hardware core network wireless gear market," he told Light Reading on the sidelines of this week's Mobile World Congress in Barcelona. "It will put more pressure on operators to maintain profitability." 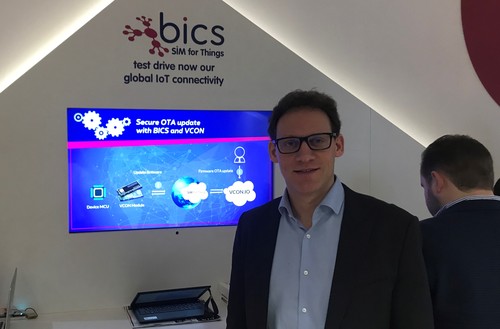 BICS man Mikaël Schachne shows off some of the Belgian operator's latest innovations at this week's Mobile World Congress in Barcelona.

Schachne's remarks came while a delegation of US officials in Barcelona was reportedly stepping up the pressure on European countries to ban Huawei. One senior telco executive said he was aware of US efforts targeting countries outside eastern Europe, where Mike Pompeo, the US Secretary of State, recently traveled to campaign against Huawei.

US authorities insist Huawei is a national security threat, arguing that China could use "backdoors" in its products to spy on other countries. Huawei has repeatedly denied allegations it has close links with the Chinese government and says no conclusive evidence of spyware has ever been found.

Arrested at Vancouver airport in December, Meng Wanzhou, the company's chief financial officer, faces extradition from Canada to the US on charges of lying about Huawei's involvement in business deals with Iran, which is subject to US trade sanctions. The US is also pursuing criminal charges against Huawei for allegedly stealing trade secrets from T-Mobile US, a major US wireless operator.

Bengt Nordström, the CEO of Northstream, a consulting business based in Sweden, says the dispute forms part of a "global power" struggle between the US and China.

Fear of China's growing technological might is behind the US campaign, according to Kaan Terzioglu, the CEO of Turkcell, which uses Huawei equipment in the Turkish market.

Even if Europe resists calls to ban Huawei, the US could seek to block Huawei's access to American suppliers, which provide componentry for its networks and consumer devices. Last year, the same measures against ZTE nearly drove the smaller Chinese vendor out of business, after it was previously charged with breaching sanctions against Iran.

Earlier this week, Light Reading was able to reveal that operators in Europe and Asia are developing contingency plans in the event of a US components ban. Those plans include stockpiling equipment and drawing up contracts that would guarantee access to warehouses where network gear is stored.

Schachne is not the only European executive to have publicly warned about the consequences of a Huawei ban. During a press conference at Mobile World Congress, Vodafone CEO Nick Read said excluding Huawei from Europe's 5G markets would result in a two-year delay to 5G network rollout.

Like Schachne, Read also alluded to the long-term effect on competition such a move would have. "Huawei in mobile infrastructure has a 28% share of the market, Ericsson is 27% and Nokia is 23%. It is a nice balance, but they have the vast majority of the market between them," he said. "The market changes a lot when you go down to two players. At the same time, you have to balance resilience at the national level in terms of infrastructure. How do you do that? Suddenly you get inefficiencies injected into that."

While frequently hailed for their technological expertise, Chinese vendors are widely assumed to have challenged their European rivals on pricing, and the disappearance of Huawei and ZTE would trouble operators as they embark on a new round of investment in 5G networks.

Squeezed
Although it would not have a direct impact on a company such as BICS, any profit squeeze on the operators it serves would be unwelcome.

BICS has been forced to diversify into new markets by falling prices and soaring levels of traffic at its mainstream business. Thanks to its late-2017 takeover of TeleSign, a US CPaaS (communications platform-as-a-service) specialist, it managed a 2% rise in sales last year, to about 1.35 billion ($1.54 billion), and a 7.7% increase in net profit, to 154 million ($175 million).

The pricing pressure and traffic growth have been driven partly by the abolition of roaming charges in the European Union, says Schachne.

"It was a big hit," he explains. "That is putting more pressure on us and that is undeniable  Revenues are declining, and costs are increasing because there is more traffic than before."

According to research BICS recently published, global 4G roaming traffic increased by 95% last year. The trend looks set to continue in 2019 as more European consumers take advantage of the "roam like at home" legislation that scrapped roaming charges attached to data services.

The shift to 5G poses a new investment challenge for BICS. "It is a brand new set of signaling and you cannot really use 4G signaling roaming infrastructure so everything has to be rebuilt from scratch," says Schachne.

BICS is currently in discussions with mobile operators preparing to launch 5G services and expects to carry out 5G roaming trials this year before it sees the first "traffic streams" toward the end of 2020.

Part of the BICS 5G upgrade will be carried out by software engineers working in-house, says Schachne. The operator acquired one of its main signaling vendors back in 2013 with the takeover of Spanish software development company Aervox.

Schachne points out that BICS does not use any Chinese vendors but says that situation is not the result of any company decision to exclude them. "We invited some but never selected them," he says.