AT&T, Verizon and T-Mobile walked away with the lion's share of the millimeter-wave (mmWave) spectrum licenses up for auction. The news is noteworthy considering this is the FCC's first-ever auction of mmWave spectrum licenses -- spectrum that many expect to form the basis for the nation's high-speed 5G networks.

The FCC has released the identities of the bidders of its two 5G auctions on Monday afternoon. The mmWave licenses represent one element in operators' overall strategies; to compete in 5G, carriers need to have just the right combo of coverage, network reliability and great devices. These auctions are all about carriers buying the real estate for their coverage.

The FCC held two mmWave auctions this year, one right after the other, and released the results for both event. The first auction -- Auction 101 of 28GHz spectrum -- offered licenses in select areas around the country and generated around $700 million in total winning bids. The section auction -- Auction 102 of 24GHz licenses -- offered licenses across the country, including in most major cities, and generated a total of around $2 billion in winning bids.

Below are the top ten bidders for each auction in terms of the monetary total of all of their provisionally winning bids. 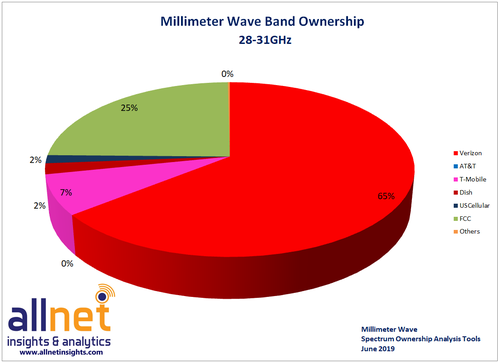 According to Allnet Insights & Analytics, here are the companies that now own spectrum licenses in the 28GHz band following the close of the auction. 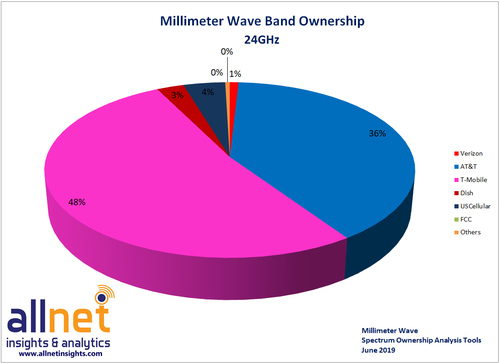 According to Allnet Insights & Analytics, here are the companies that now own spectrum licenses in the 24GHz band following the close of the auction.

"The results seem to support the view that mmWave has very limited utility," wrote the analysts at Wall Street firm New Street Research in a note to investors. "There were dozens of sophisticated participants and dozens more that didn't show up; we would assume they are all similarly well placed to assess the utility of mmWave as Verizon and AT&T. Prices settled at just $0.01 / MHz-POP with total proceeds of $2.7BN. By comparison, 600MHz was considered a disappointment at $19BN for 70MHz (700MHz of 24GHz sold)."

There were a couple of surprises in the auctions, including the low bid from Verizon in the 24GHz auction of just $15 million in total bids. Verizon has made clear its intention to build 5G in mmWave spectrum, so it's noteworthy that the operator didn't pick up many 24GHz licenses. However, Verizon does own lots of 28GHz licenses through its purchase of XO and Straight Path.

Startup Starry, meanwhile, won fourth place in the 24GHz auction with $48 million in total bids. Starry's spending on spectrum licenses is interesting considering the company is a startup that has raised millions of dollars in funding to build out its fixed wireless network in a handful of major cities. However, Starry is currently using mainly shared/lightly licensed spectrum bands for its service; the company's purchase of millions of dollars of licensed spectrum reflects a slightly new tack in its go-to-market strategy.

Finally, Dish continued its spectrum buying spree with $11.8 million spent on 24GHz licenses and $2.9 million on 28GHz licenses. The company bought 24GHz licenses in markets including Los Angeles and Dallas. The fact that Dish spent money on licenses in the FCC's mmWave spectrum auction is a significant surprise since company executives have said that Dish likely won't buy any more spectrum. Already Dish has spent around $20 billion on spectrum licenses stretching from 600MHz to AWS, but has yet to launch commercial services on those bands. Indeed, many in the industry don't believe Dish has the financial wherewithal to put its existing spectrum holdings to use, much less its new mmWave spectrum holdings.

Concluded the analysts at New Street Research: "By far the most important implication of the auctions ending is that M&A talks can re-start in two weeks. Depending on the outcome of T-Mobile / Sprint, there are a myriad of talks that should take place among the various auction participants (Verizon, AT&T, DISH, Sprint, T-Mobile, etc.). Parties can wheel-and-deal until the run up to next auction, which begins on December 10th."

Mike Dano 6/3/2019 | 8:55:10 PM
Re: Where is Sprint in mmWave Auction Great question! Sprint has not participated in a spectrum auction In decades. They have lots of 2.5 GHz spectrum.
Reply | Post Message | MESSAGES LIST | START A BOARD

Mike Dano 6/3/2019 | 8:54:48 PM
Re: Where is Sprint in mmWave Auction Great question! Sprint has not participated in a spectrum auction In decades. They have lots of 2.5 GHz spectrum.
Reply | Post Message | MESSAGES LIST | START A BOARD

Mike Dano 6/3/2019 | 8:54:36 PM
Re: Where is Sprint in mmWave Auction Great question! Sprint has not participated in a spectrum auction In decades. They have lots of 2.5 GHz spectrum.
Reply | Post Message | MESSAGES LIST | START A BOARD

However, I am surprised with complete absence of Sprint in this auction. Is it because of over-relying on T-Mobile merger or possibly content with existing 2.4 GHz Mid-band spectrum for 5G deployment nation wide.
Reply | Post Message | MESSAGES LIST | START A BOARD
EDUCATIONAL RESOURCES