If Dish Network's Charlie Ergen fully commits to building a 5G network across the US, he would probably start in Houston, New Orleans, Atlanta, Kansas City and Miami. And then maybe move to Memphis and Dallas next.

That's because these are the cities where there are large numbers of active Boost and Virgin prepaid customers, and because these cities also have a larger number of cell sites owned by either Sprint or T-Mobile.

And there's one more huge takeaway from the Tutela Technologies data that forms the basis of these conclusions: Dish's initial 5G buildout is "not just feasible, but something that can be achieved quicker than we might imagine for a greenfield 5G deployment," noted Chris Mills, head of industry analysis at Tutela.

Before we go any further, here are the cities where Dish will probably start building 5G first: 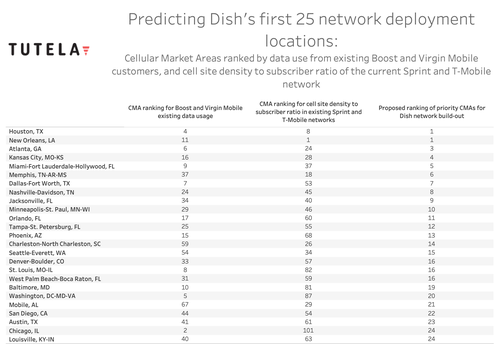 To be clear, there are a few puzzle pieces that must first fall into place before Dish can actually begin building a 5G network in places like Houston and New Orleans. Most importantly, T-Mobile would need to close on its proposed merger with Sprint. A group of state attorneys general have filed a lawsuit to block the transaction, and no one knows what's going to happen next.

But if T-Mobile is ultimately successful in merging with Sprint, Dish has promised to acquire Sprint's entire prepaid business covering 9.3 million customers across the operator's Sprint, Boost and Virgin prepaid brands, and to initially manage those customers as a T-Mobile MVNO. Dish will also be able to buy at least 20,000 of the cell sites that Sprint and T-Mobile plan to decommission as part of their efforts to combine their respective networks.

Ultimately, based on its agreement with the Department of Justice and FCC, Dish has promised to build a 5G network covering at least 70% of the US population by 2023, via at least 15,000 5G sites.

It wasn't clear exactly where exactly Dish might first start building that network. Until now.

The data
Tutela can see what is happening on around 250 million phones. That's because Android and iOS app developers put its software into their apps, and then that software runs in the background of those apps after mobile users download them. Tutela then collects and sells that data (which doesn't include any information that can identify a user or their device, including email addresses, IDFA, AAID, device ID or IP addresses) and splits the resulting profits with participating app developers. The company counts over 3,000 participating app developers.

The company agreed with Light Reading to plumb the depths of its data to answer one question: If Dish does indeed begin building out a 5G network, where would it start?

Data usage and location of Boost/Virgin subscribers. The firm found that most of these customers are more geographically concentrated than the customers of other nationwide operators. Specifically, the firm said 80% of the Boost/Virgin customer data it recorded was sent and received in just 3.1% of the observed Boost/Virgin geographic footprint. By comparison, 80% of customer data was sent in 6.7% of the Verizon footprint, and 4.8% for AT&T. "That's not necessarily a surprise -- prepaid brands are known to be more concentrated in urban areas -- but it does demonstrate that Dish won't have to cover all that much geographic area with a 5G network in order to offload a healthy portion of its traffic onto an owned network," noted Mills of Tutela. 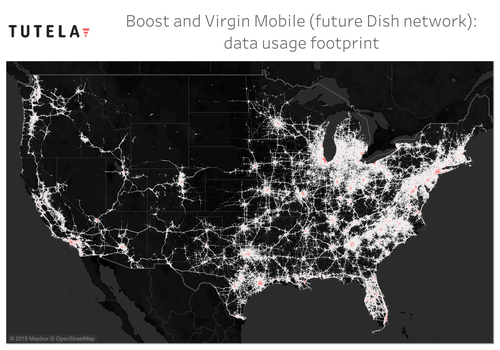 Cell site density for the combined T-Mobile/Sprint network. Mills explained that it's reasonable to assume that the combined carrier would decommission sites that are redundant because they are close together. After all, it doesn't make sense for the combined Sprint and T-Mobile to keep one T-Mobile tower right next to one Sprint tower. 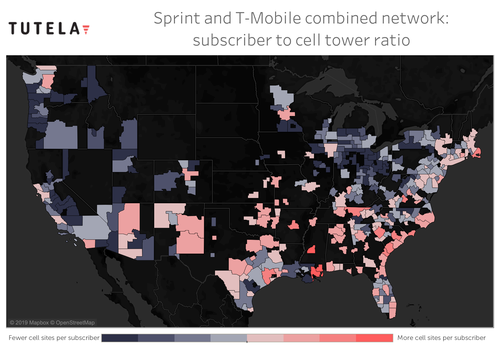 The bottom line
The results, as noted by Tutela's Mills, are important for Dish's 5G efforts. They indicate that the Boost/Virgin customers that Dish hopes to buy aren't spread out all over the country but are mainly clumped up in a few big cities. This is important for Dish because the company plans to initially acquire those customers by acting as a T-Mobile MVNO -- that involves Dish paying T-Mobile for the use of its network but slapping its brand over the bills sent to customers. But Dish eventually hopes to move those customers from T-Mobile's network and onto its own network, in order to eliminate its MVNO payments to T-Mobile. And that process will be relatively straightforward, as most Boost/Virgin customers live in just a few big cities.

And, just as important, those cities also roughly line up with the locations where the combined Sprint and T-Mobile will probably have tower sites they're willing to sell. Since it has no existing wireless business, Dish will have to purchase not only wireless equipment like antennas, it will also have to purchase space on cell towers that can hold its equipment. Getting access to the unwanted cell towers from the merged Sprint and T-Mobile will give Dish a head start in this area -- and according to Tutela, there's noteworthy overlap between the cities where these towers will likely be, and where there are lots of Boost/Virgin customers who will need to be covered.

To be clear, Tutela's data should only be viewed as a signal rather than a concrete roadmap. After all, 5G network buildouts are subject to a wide variety of issues, from obtaining suitable cell site locations to ensuring suitable technological capabilities. The Dish executives tasked with the buildout will be on the hook for all of these issues and more.

That is, if Dish does indeed embark on its buildout. All eyes on that topic now turn to December 9, when the lawsuit against the proposed Sprint and Tmobile merger goes to trial.