It is October 1973 and OPEC, the Organization of Petroleum Exporting Countries, has slapped an oil embargo on major Western economies it believes are sympathetic to Israel. Less than six months later, the price of oil has rocketed nearly 400%, bringing economic misery to nations addicted to the 'black gold.' But the decision ultimately backfires. Determined never again to be at the mercy of the oil-producing club, countries prioritize the development of OPEC alternatives. The concept of "energy security" takes hold. While OPEC remains influential, its stranglehold is eventually broken.

Similar forces are now at work in the telecom sector. Years of consolidation have left the global industry with three all-powerful suppliers of the equipment used in mobile networks: Ericsson and Nokia, from northern Europe, and China's Huawei. Unlike OPEC governments, this profit-seeking triumvirate, riven by commercial interests, is motivated to flood the market rather than block shipments. But the dependency of critical national infrastructure on a handful of big companies has sparked a conversation about "telecom security" with echoes of the 1973 oil crisis. Toppling the triumvirate is becoming a geopolitical objective.

The 5G and Huawei dilemma
Two linked catalysts are making it so. The first is the recent arrival of 5G and the hype that surrounds it. Where 4G was used to connect smartphones, 5G may eventually support a cornucopia of devices, from industrial equipment and self-driving cars to sensor-equipped contact lenses that make virtual reality the default existence for Generation Z-ers. Because 5G could be the stitching that binds together the digital fabric of future national economies, it has become an issue of national strategic importance. Trusting three foreign players with something this sensitive makes governments nervous.

The second, related catalyst is the ascendancy of Huawei in the 5G market. Were it a Western firm, Huawei's march to 5G pre-eminence would probably have met with no resistance from the US. But its Chinese heritage has set off alarms. US opponents worry the world's other economic superpower may gain the upper hand in 5G, citing China's poor record of playing by international rules. They also fear that over-reliance on Huawei leaves many Western operators vulnerable to cyberattacks directed by Chinese state authorities.

Banning Huawei, or excluding it from parts of the 5G market, is seen as a potential answer, despite the short-term pain it would inflict on many operators. Although achievable, swapping one vendor's gear for another's can be costly and time-consuming affair. Operators worry about falling behind 5G rivals and the hit to profitability. Governments are similarly uneasy about lagging in 5G. Under US pressure, some continue to weigh a decision, while a few have already imposed restrictions. Concern about Huawei, including the possibility authorities eventually block it, has driven a few major European operators to limit the Chinese vendor's role: In the UK, BT is stripping Huawei out of its mobile "core," the brain of the EE network it acquired in 2016, to comply with a company policy not to use Chinese vendors in this sensitive area; France's Orange says it will not use Huawei to build a 5G network in its domestic market.

But a full Huawei ban could somewhat ironically leave countries with even less telecom security, giving national networks just two viable options: Sweden's Ericsson and Finland's Nokia. Financial strife for one of those players would then be a nightmare scenario. Unlikely as that may seem, the 2009 bankruptcy of Canada's Nortel Networks, a former industry giant, means it cannot be dismissed. Ericsson racked up net losses for eight quarters before a turnaround plan pushed it back into profitability last year. According to international financial reporting standards, Nokia remains unprofitable, reporting a net loss of 191 million ($213 million) for its recent second quarter. It is thanks only to Nokia's generous cash reserves that investors are sanguine.

The difficulties of the Nordic vendors have been widely blamed on aggressive Chinese competition. One source who preferred to remain anonymous accuses Huawei of "dumping," or selling below the cost of production to secure market share, in violation of World Trade Organization rules and with the support of China's government. The opacity of its financial statements conceals this tactic, he says. Like it or not, the industry in the long term may have to choose between the Nordic vendors and Huawei. That puts it under more pressure to find alternatives.

Where They Work (Distribution of Employees) 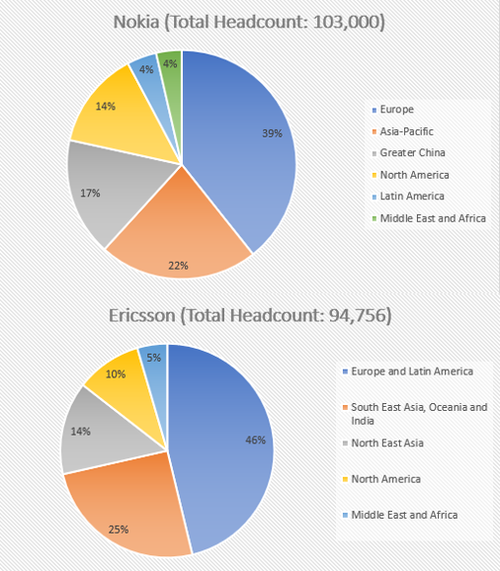 Concern about the globalization of the telecom supply chain adds to that pressure. Like Huawei, both Ericsson and Nokia source components internationally and maintain large Chinese facilities. Nokia Shanghai Bell, Nokia's Chinese joint venture, counts the state-backed China Huaxin as its local partner and employs around 17,200 people in the Greater China region, about 17% of its entire global workforce. Ericsson had 13,334 employees in North East Asia at the end of June, roughly 14% of the total. Aware of the suspicion that falls on Huawei, China's military is likelier to introduce spyware into equipment made by Western firms on Chinese soil, according to some experts.

This global supply chain is now buckling under the weight of geopolitics. Currently restricted from acquiring US components, Huawei is developing alternative sources, including HiSilicon, its wholly-owned semiconductor business. Reportedly under pressure to make US-bound equipment outside China, Ericsson is pumping funds into US facilities, including a highly automated "smart factory." Nokia says it is prepared for adjustment. "We do have a global supply chain and in that sense the readiness to make shifts is there," says Kristian Pullola, its chief financial officer. "For others with a China-centric one, the starting point is more challenging."

Next page: The end of globalization?

johnwickusa 9/20/2019 | 8:17:35 AM
About Articles So, bad for these big companies that they are facing thses crisis. Chase verify card
Reply | Post Message | MESSAGES LIST | START A BOARD

Till now, there is still no evidence revealing that Huawei puts spyware in equipmet. Furthermore, China is a country with legal system, so it is illegal to force local branches of global firms to install spywares in their equipments. No evidence just staying oral is not convincing.

iainmorris 8/2/2019 | 4:18:54 AM
Re: Scratching my head The parallel with oil, as described in the article, is that something of vital strategic and economic importance to a country is controlled and developed by a small and powerful club (a small number of oil-producing nations in the case of oil; a handful of vendors in the case of telecom networks). Energy security was all about diversification of supply so that countries weren't at the mercy of OPEC. Likewise, there is now a push for diversification (including the development of domestic suppliers) in the telecom industry to guarantee network security.

Obviously, yes, there are still major differences between oil and telecom. I wouldn't for an instant suggest the industries are exactly alike.
Reply | Post Message | MESSAGES LIST | START A BOARD

sergemelle 8/1/2019 | 8:56:27 PM
Huawei is why we only have Nokia and Ericsson left Its interesting you mention Nortel's bankruptcy as an example of the risk of having only Ericsson and Nokia left as Huawei alternatives for 5G (BTW you forgot Samsung).

While Nortel had many self-inflicted problems, the same way that someone who is always sick is less able to fight off a life-threatening condition, or like the diseased tree that can't weather the drought, Huawei acted as the sickness or disease that led Nortel to die.

Huawei's arrival onto the mainstream telecom markets in the late-1990's/early-2000's was underscored by a relentless "sell 50% lower than any western vendor" strategy that crashed industry profits, shrank R&D budgets, and fundamentally weakened the ability of not only Nortel, but also Lucent and Alcatel, to survive.

It is sort of surprising that it took nearly two decades for a broader understanding to permeate that Huawei's rise to dominance was underpinned and enabled by a deliberate and unfair geo-political strategy of economic warfare guided by deliberate Chinese government policy.

I am sure that a lot of industry insiders who were on the front lines of Huawei's aggressive pricining practices from the early-2000's would wonder why it took Western governements and institutions so long to recognize and categorize the threat for what it was, and still is.

So rather than question whether exclduing Huawei creates the risk of having only Ericsson and Huawei left to rely on, maybe the more realistic risk assessment is that unless more restrictions/conditions are placed on Huawei's Western 5G deployments, then do we create the conditions where eventually ONLY Huawei will be left to rely on?
Reply | Post Message | MESSAGES LIST | START A BOARD

However, oil is a finite physical resources while 5G is really an intellectual properties protected only by international agreements.

Oil has always been at the mercy of OPEC until the advent of Russian oil and American technologies (fracking).

Before 5G, during the telecom bubble, optical was king and dominated by a duology, namely Nortel and Lucent, with Ciena being a niche specialist. Huawei's role in Nortel's demise is still subject to debate but the two giants are no more.

The world is increasingly interconnected. Regionists want to put the globalization genie back into the bottle while standardization is a way to improve productivity. There are many forces at work here. Some complementary and some contradictiory.

Like it or not, Huawei is state sponsored and able to undercut Ericsson and Nokia. However, since Nokia has been able to sell 5G gear in China, it demonstrates its pedrigree. However you see the jockeying of positions in 5G (infrastructure), I don't see the parallel between it and oil
Reply | Post Message | MESSAGES LIST | START A BOARD
Page 1 / 2   >   >>
EDUCATIONAL RESOURCES