The fortunes of Chelsea, one of England's biggest soccer clubs, and Ericsson, one of the world's largest telecom equipment suppliers, could hardly look more different.

In May, at around the same time Chelsea were being crowned champions of the English Premier League, Ericsson AB (Nasdaq: ERIC) had just reported the latest in a long sequence of disappointing quarterly results. Now touting a new partnership with the club, Ericsson must hope that some of Chelsea's prize-winning form rubs off on its own loss-making operations. (See Ericsson Strikes Connected Stadium Deal with Chelsea FC.)

But in its current shape, the deal may be relatively short lived. Building on an existing relationship with Chelsea, Ericsson is to provide connectivity services at the club's Stamford Bridge stadium in London. The goal is to ensure fans can take full advantage of the online experience, using smartphones and tablets to watch video highlights and order food or merchandise from their seats. Yet the arrangement looks anachronistic in two respects:

For one thing, the connectivity technology of choice is WiFi, rather than a more advanced 4G or pre-5G system. The deal also shows Ericsson teaming up directly with an enterprise, when it has recently said it will pursue all enterprise business in future through service provider partners. The contract with Chelsea is to last just two years -- about the same length as a typical consumer smartphone one. (See Ericsson Denies Ditching the Enterprise Market.)

Using WiFi and avoiding telco partners will carry big advantages over that period, says Arun Bansal, the recently appointed head of Ericsson's operations in Europe and Latin America. A partnership involving one of the UK's operators would benefit only fans on that network, he points out. Similarly, any short-term solution based on cellular technology would not be "carrier-neutral," he says.

Arun With a View 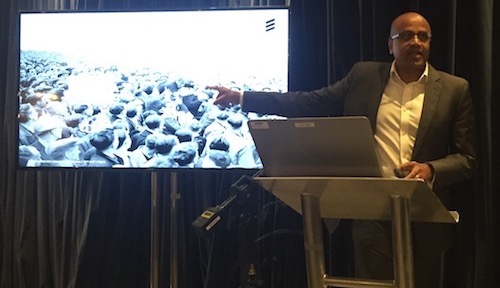 Eventually, though, both carriers and cellular technology are likely to figure prominently in Ericsson's dealings with Chelsea. And Ericsson's expectations about the evolution of this arrangement speak volumes about its future partnership and technology plans.

On the technology front, more advanced 4G and 5G technologies should hold far bigger attractions than WiFi for all parties concerned. To a significant degree, that is because of the very low "latency" -- the delay in sending signals over data networks -- that 5G will bring. With managed WiFi, says an Ericsson spokesperson, a user might experience latency of about 25 milliseconds. On advanced 4G and 5G systems, it should fall to below 10 milliseconds. Such levels could open up a variety of new service opportunities in a stadium setting, allowing customers to watch high-definition instant replays more easily, for instance. (See ETSI Gets Edgy About Mobile and The Growing Pains of 5G.)

Guaranteeing a carrier-neutral service as Ericsson moves toward a cellular solution will not be straightforward, though. Ericsson's new strategic direction could make it even harder. Unlike rivals Huawei Technologies Co. Ltd. and Nokia Corp. (NYSE: NOK), which are appealing directly to enterprise clients, it has decided to use service providers and US partner Cisco Systems Inc. (Nasdaq: CSCO) as its sole channels to market. (See Nokia: A Global Network Operator for the Enterprise? and Huawei Takes Aim at AWS, Google With Public Cloud Move.)

All three vendors, however, share the view that enterprise organizations across a number of vertical markets will increasingly start to invest in their own private or privately managed cellular networks, especially as 5G takes off. A hospital, for example, could operate localized 5G networks to support remote surgery, whereby doctors manipulate scalpel-wielding robots from hundreds of miles away. One of Nokia's biggest mining customers has been rolling out its own private 4G network, using its own spectrum license, to support internal applications. (See Does Ericsson's 5G-for-Healthcare Biz Case Need Surgery?)

"In five or ten years there will be localized licenses for 5G where different industrial use case owners have their own licenses instead of being dependent on operators," says Bansal in a discussion with Light Reading. "That means they can deploy their own 5G system if they don't want to be tied to a particular operator and that is why we are exploring neutral-host solutions."

Where Ericsson differs from Huawei and Nokia, clearly, is on the channel to market. The Chinese and Finnish suppliers are intent on partnering directly with enterprise organizations now and in the future, cutting out service providers as partners on some deals (although certainly not all of them). Ericsson believes it makes more sense to work through service providers that are also taking a much keener interest in the enterprise market. "It may be not that Ericsson is signing a 5G contract with Chelsea but that one of our customers is signing a contract with Chelsea," says Bansal.

So while there might not be a "neutral" cellular option today, Bansal envisages a scenario in which a UK telco builds a localized 5G network for Chelsea in partnership with Ericsson. With the requisite license, Chelsea would then be able to offer services directly to its fans, much like a new and improved mobile virtual network operator, and support machine-based connectivity needs at its football ground.

Next page: Taking on Huawei and Nokia

varunarora 7/19/2017 | 10:59:24 PM
Re: Local 5G networks Very well said. The media KEEPS using the example of 5G enabling the performance of a surgery in a hospital by a doctor many miles away - one literally sees this example in EVERY story about 5G that wants to show how 5G's "low" latency can be leveraged. But I cannot imagine - given all the things that CAN go wrong - that:

Sure, 5G may in the ideal world have a latency below that of wifi, but why would a hospital use wifi instead of ethernet (or equivalent)?

Maybe I'm just being a dense dunce... I'd love for someone to explain this to me...
Reply | Post Message | MESSAGES LIST | START A BOARD

iainmorris 7/19/2017 | 9:45:34 AM
Re: Local 5G networks It's a good point. My understanding is that in this case they would need more than one localized network -- a facility where operations could be carried out that benefits from 5G connectivity, and 5G connectivity at the site where the doctors are based.
Reply | Post Message | MESSAGES LIST | START A BOARD

schlettie 7/17/2017 | 5:03:38 PM
Local 5G networks How is a hospital operating a local 5G networking going to reduce latency for doctors trying to operate surgery robots from hundreds of miles away?
Reply | Post Message | MESSAGES LIST | START A BOARD
EDUCATIONAL RESOURCES