A company that traces its ownership to billionaire Michael Dell is renewing calls for the FCC to take a look at whether the 12GHz band could be used for 5G.

In doing so, Dell is making the same argument that fellow billionaire Charlie Ergen has made: That the FCC should craft new rules that would allow 5G operations in the 12GHz spectrum band.

However, so far the FCC -- the US government agency charged with managing the nation's radio frequency resources -- hasn't paid much attention to the 12GHz band and has instead focused much of its efforts lately on releasing other spectrum bands for 5G, including the C-Band that stretches from 3.7GHz to 4.2GHz.

It's unclear whether Dell's entry into the scene will change that situation -- but whatever happens, it's certainly noteworthy.

Another spectrum speculator
Dell's relatively recent entry into the 12GHz issue stems from his family's private money management firm, MSD Capital (apparently, when you're the 25th richest person in the world, as calculated by Forbes, that's the kind of stuff you have). MSD Capital, which boasts of investments in areas ranging from real estate to mixed martial arts, last year decided to back RS Access, a company formed by V. Noah Campbell. Campbell is a wireless industry entrepreneur and founder of Radio Spectrum Group. RS Access acquired 12GHz assets and spectrum leases from MDS America, which along with the likes of Dish Network and Cablevision purchased spectrum in the FCC's 12GHz MVDDS spectrum auctions in 2004 and 2005.

Like most of the rest of the MVDDS spectrum licenses that were auctioned off more than a decade ago, MDS America's spectrum licenses sat mostly unused until last year, when Campbell's RS Access began building some systems around them. He has so far deployed roughly 300 transmission sites using equipment from CBNL, and he is offering a range of services around the country including real-time video support for first-responder training, broadband connectivity at a horse farm that offers therapeutic riding for military veterans and wireless connectivity for LED billboards that allow businesses to remotely change advertising. 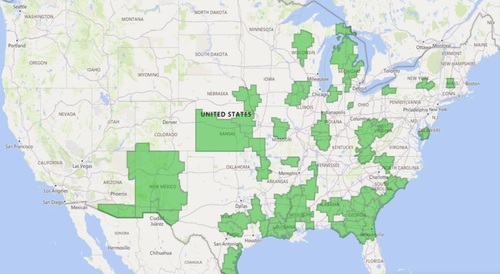 Now though, Campbell and representatives from MSD Capital are urging the FCC to have another look at the rules around operations in the 12GHz band, in order to both raise the value of their licenses and to create more opportunities in the 5G ecosystem. Last week they held meetings with representatives from all of the five commissioners at the agency, as well as officials from the FCC's wireless bureau. Specifically, Campbell and his associates are urging the FCC to consider allowing two-way operations in the 12GHz band, not just one-way broadcasts as are currently allowed, and also to increase the amount of power that 12GHz transmitters can use, which would increase the distance those signals could travel.

Importantly, Campbell explained that new rules for the 12GHz band could release up to 500MHz of prime spectrum for 5G. He said transmissions in the 12GHz band can travel around four to five miles -- much further than transmissions in the millimeter-wave spectrum bands like 24GHz and 28GHz that operators such as Verizon are using for 5G and operators such as AT&T and T-Mobile have purchased in recent FCC spectrum auctions.

Campbell added that 5G operations in the 12GHz band could also be combined with operations in other spectrum bands, such as the C-Band or CBRS band. Doing that would significantly increase the amount of data that could be handled by a network running in those spectrum bands.

Dell joins Ergen in pushing 12GHz for 5G
To be clear, this isn't the first time that a company backed by a billionaire has pushed the FCC to look at new rules for the 12GHz band that are more friendly to 5G. Back in 2016, the MVDDS 5G Coalition -- which includes Ergen's Dish Network -- made a similar plea to the FCC.

However, that effort has faced opposition from another set of big players: AT&T and OneWeb, among others. Both companies operate satellites (AT&T's DirecTV uses satellites for TV while OneWeb's growing constellation of low-Earth orbit satellites are to be used for broadband Internet) and are worried that new rules for the 12GHz band might interfere with existing satellite operations in the spectrum.

Further, Ergen's push on the issue has likely been stalled by Dish's new deal with the FCC to deploy a 5G network in other parts of its spectrum holdings as a condition of the proposed merger of Sprint and T-Mobile. That's important considering Dish owns roughly three quarters of the nation's available 12GHz spectrum licenses, while RS Access has access to around 15%.

Campbell and his associates argue that existing satellite operations don't use much of the 12GHz band, and that interference between 5G operations and satellite operations can be avoided with the kind of spectrum-sharing technology that is being put to use in the 3.5GHz CBRS band. "Enormous advances in technology coupled with evolving modes of service delivery have created tremendous new possibilities for flexible use of the 12 GHz band for mobile communications while also protecting existing satellite services," RS Access wrote of its meeting last week with FCC officials.

And in making its closing argument for the new rules, Campbell's RS Access sought to tap into the "race to 5G" slogan that a wide variety of other telecommunications companies have leveraged in their own lobbying efforts in Washington. "Given the vital interest of America's leadership in mobile broadband and the immense technological innovation in network operations in recent years, RS Access urged the Commission to consider how to put this critical 5G resource to its highest valued use," the company wrote. "The 12GHz band is 500 megahertz of contiguous mid-band spectrum that is sorely needed for 5G and can help ensure U.S. technological leadership now and in the future. Successful modernization of the 12GHz band could be the crowning achievement of the Commissions successful 5G spectrum policy."