The first company to make phone calls and the movie studio that debuted "talkies" are combining in a deal that could change media well into the next century.

Following a six-week trial, Judge Richard Leon of the US District Court for DC today announced that he has approved the $84 billion merger between AT&T Inc. (NYSE: T) and Time Warner Inc. (NYSE: TWX) with no restrictions.

The court's ruling ushers in an era of US media companies reaching unprecedented vertical integration and scale, pitting AT&T as a likely competitor on the world stage as both the key distributor of digital content and, soon, the owner of the content itself.

Analysts say this is also likely to kick off a merger frenzy as companies with original content, that reach audiences at scale, are now considered prime real estate. In a call with Light Reading today, Ed Barton, chief analyst for the Ovum Ltd. entertainment practice, sets the scene:

"You've got Sprint waiting at the starting line. You have a whole confab between Disney, Comcast, and 20th Century Fox to sort out as well," says Barton. "I think you can safely say that every other large-scale telco or distributor or network operator in North America will be looking around at every single owner of large content of any significance, and going, 'Can we do something here?' "

The merger of AT&T and Time Warner has been compared to a similar deal by Comcast, but the scale is much different.

In 2011, Comcast Corp. (Nasdaq: CMCSA, CMCSK) bought a 51% stake in NBC Universal from General Electric, creating what was then a $30 billion media behemoth. Also at the time, Comcast had a combination of about 23 million video subscribers and 17 million Internet subscribers. AT&T, which bought DirecTV in 2015, had around 47 million video connections through its DirecTV, DirecTV NOW and U-verse services last year. The company had 141.6 million US wireless subscribers by the end of 2017. 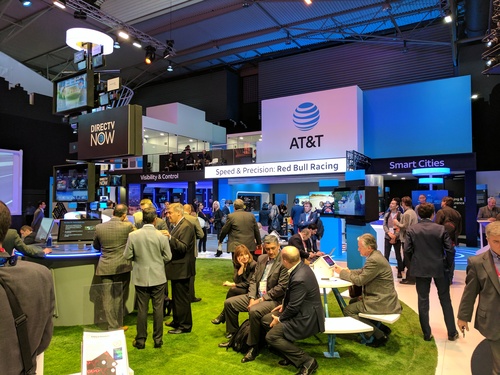 In November 2017, after months of back-and-forth between AT&T and regulators, the Justice Department sued to block the merger. Justice asked AT&T to divest certain media properties as a merger condition and AT&T took the fight to the courtroom (and elsewhere). (See DoJ Sues to Block AT&T/Time Warner.)

AT&T maintained throughout its defense of the deal that it needed scale, and the reach of its mobile and broadband networks, to make content less expensive to distribute. Its large mobile and Internet customer base, along with the carrier's focus on lowering the cost to deliver each bit of data, potentially provides AT&T the flexibility to develop more varied and profitable bundles of content and technology for consumers.

This merger is also about big data and who controls it. AT&T, armed with Time Warner's media properties, TV channels, Hulu and other assets, can form a more complete picture of who its subscribers are, and target advertising accordingly. Also, since the mobile industry in the US is near saturation, having a 5G network with a viable content source under one roof gives the company a way to fend off competitors and keep subscribers, with more targeted advertising, widen the margins it can make on each customer, device and video stream on its network.

The deal will be unlike anything AT&T has done before and will require careful execution to make sure the content studio and distributor work together well. Though AT&T has integrated big technology mergers before, it has never really been a studio owner. "I mean, if we're going to be really unsympathetic, you could think, if you tie two rocks together, sometimes they just sink faster," says Barton.

The cultural differences between tech and telecom companies and entertainment providers are not trivial. "[Telecom and tech companies] don't look at audiences. It's a very, very different relationship with someone to say, 'I'm going to give you a broadband connection,' or, 'I'm going to give you a mobile phone subscription,' to, 'I'm going to entertain you.' There are many, many other things you have to bring to the party. Of course, there's a level of trust you need with your audience, especially if you're going to do things like news broadcasting, or if you're going to provide programming to people's kids," says Barton.

kq4ym 6/26/2018 | 9:50:17 AM
Re: Giant steps It's going to be interesting to watch how regulators are seemingly letting mergers get approvals with greater ease among huge companies. As "unprecedented vertical integration and scale," becomes more common it will be how consumers fair for better or worse versus technology and corporate profits moving more rapidly forward with such merger activity.
Reply | Post Message | MESSAGES LIST | START A BOARD

mendyk 6/15/2018 | 12:27:00 PM
Re: Giant steps I kind of stopped reading once I hit the insults. Just kidding, sort of. Anyway, there's no point talking at each other. Different perspectives yield different opinions. Or to steal a line from Sir Charles Barkley, "I may be wrong -- but I doubt it."
Reply | Post Message | MESSAGES LIST | START A BOARD

Why do you think they want to spend their money?  They do so to be in businesses of greater value.  Otherwise, they would be wasting shareholder money.

Now I know you personally have a jaded view.  But remember, you are being PAID to create content.  I recognize that you would like it to be more and that you see yourself at the mercy of the distribution channels.  That is because you have chosen a content path that has limited value.  That's okay because most content is of little value.  THere is a very high percentage of Youtube videos with 0 or 1 view.  That is low-value content.

Carriers have a business model a lot like "Field of Dreams".  They don't ask IF there is an ROI.  They ask WHEN they will get an ROI.  Content (and products) work differently.  They have a much higher ROI ceiling, but the floor can be negative.  The whole idea is to try to find ways of reducing that floor (which is why we end up with content franchises - Call of Duty, the MCU, Book Series, remakes of old TV shows).  The goal is to try to provide a higher likelihood of success.

The way to make out as a Content Generator is (to use actor analogies) to be Brad Pitt or Bruce Campbell (who has a great book on the topic).  How do you build a career (business) based on lots of smaller roles??

Who makes more money Film Makers or Theatres?  Even if Film Makers can't get a film into Theatres, they can use other distribution channels.  There will always be more.  So, let's say Comcast starts charging Netflix.  Guess what, other channels will get more business and Comcast will lose.  There is no example in History where distribution beats content.  It is because there is a lower barrier to entry on distribution than there is on premium content.

Content being charged by carriers will NEVER happen.  We talk to carriers and they WANT it to happen.  But it won't.  They will spend $B trying to do so.  In the end, they will just put in bigger pipers, up the service rates, and make more money.  None of the large US carriers is in trouble.  They just want more money.  Nothing wrong with that.  They are lying to themselves, vendors, analysts and the press about these "woes".  To lose content, they will go back to consumer revenue of dial-up.  Which means they would lose tremendous amounts of revenue.

mendyk 6/15/2018 | 9:15:08 AM
Re: Giant steps Comcast's core business is content distribution. It pays for the content it needs for that business, just as any other business pays for the resources it needs to operate. It doesn't mean that content is more valuable than the distribution of that content. Content without distribution has limited monetary value.
Reply | Post Message | MESSAGES LIST | START A BOARD

So, Comcast...aggregator other than NBC universal and will always PAY content....that is what you just posted.

Now let us take a look at the Linear TV market.  As you recall, this was a complete monopoly for a long time.  Who pays who?  Does Disney pay Comcast?  Nope, Distribution PAYS Content.  Has since the days of the Illiad.

There is no possibility that Netflix is paying an ISP for distribution.  It will be the other way around.  And ALWAYS has been.

Content has owned distribution for 3,000 years.  Not going to end now.