The global semiconductor industry is in the midst of an enormous decline: According to new figures from research firm IHS Markit | Technology, the sector this year will decline by almost 13% in revenue over last year.

But don't fret, according to the firm's analysts -- 5G will save the day.

"Throughout the history of the semiconductor industry, every market downturn has ended with the arrival of a technical innovation that spurred a major increase in demand," Len Jelinek, senior director of semiconductor manufacturing for IHS Markit | Technology, said in a release. (Light Reading and IHS Markit | Technology are both owned by Informa.) "In the past, these innovations have had momentous impacts, such as the advent of the world wide web or the introduction of the iPhone. Now another historic innovation is set to take its place among these advances: 5G. However, 5G's impact will spread far beyond the confines of the tech industry, impacting every aspect of society and driving new economic activity that will spur rising demand for microchips."

Specifically, IHS Markit | Technology is predicting that global semiconductor market revenue will rebound to 5.9% growth in 2020, with revenues rising from $422.8 billion this year to $448 billion next year. This likely comes as a relief to the world's top semiconductor companies such as Intel, Samsung, Taiwan Semiconductor, Qualcomm, Broadcom and others. 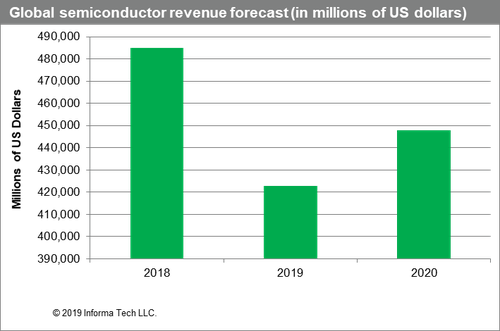 Specifically, IHS Markit | Technology noted that the current semiconductor downturn was triggered by a freefall in DRAM and NAND memory pricing "that started in late 2018 due to an oversupply of components." That finding is underscored by an announcement today from Samsung, a major supplier of those kinds of chips, which reported that its operating profit likely plunged 56% in the third quarter. As noted by CNN Business, Samsung said it expects an operating profit of $6.5 billion for the quarter that ended in September, down from $14.7 billion for the same period a year ago.

But, according to a range of predictions, 2019 represents the low point in the space, and sales will pick up again next year. IHS said that upturn will be directly due to 5G smartphones because the smartphone business is the largest consumer of semiconductors of any industry, with $87.7 billion in global revenue this year.

The firm's outlook lines up with forecasts from the likes of IDC and Gartner. IDC, for example, expects the smartphone market to decline 2.2% year over year in 2019 -- the sector's third straight year of global contraction -- but that the space will reach 1.6% growth in 2020. Similarly, Gartner reported that worldwide sales of smartphones to end users will total 1.5 billion units in 2019, a 2.5% decline year over year, but that smartphone sales will grow again in 2020, "driven by broader availability of 5G models and the promotion of 5G service packages in various parts of the world by communications service providers."

Perhaps more importantly, IHS sees 5G contributing to greater growth in the years to come as the technology "fosters the emergence of new business models and transforms industries and economies around the globe." The firm reported that, by 2035, 5G will enable $1.3 trillion to $1.9 trillion worth of economic output in the US alone -- "Thats nearly the same sum that U.S. consumers spent on automobiles in 2016," the firm wrote in its release.

Of course, semiconductor suppliers and smartphone vendors aren't the only tech firms with their fingers crossed for a 5G-driven upturn. Operators like Verizon, AT&T and others that are building 5G networks are hoping for similar results -- already Verizon's management has predicted that it will see a "significant" impact on its revenues from 5G as early as 2021.