While carriers are bragging that 5G will boost speeds up to 100x over LTE, the reality falls far short of that hype -- at least for now, according to a report by network monitoring firm OpenSignal.

T-Mobile, for example, boasts that 5G will support 10x faster speeds for mobile broadband. And CTIA, the US wireless industry's trade association, crows that 5G will be up to 100x faster than 4G.

Well, the initial results are in, and the reality doesn't quite match up to the hype. At least not yet. 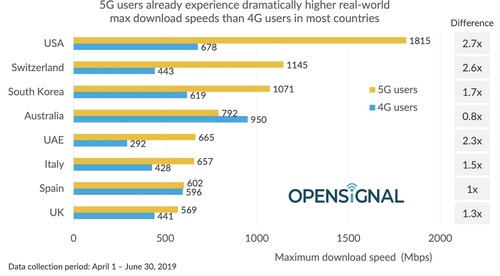 OpenSignal noted that US operators provided the highest maximum 5G download speeds of the eight countries where it recorded results. "Switzerland followed in second place with 1145 Mbps and South Korea ranked third with 5G users maximum speed of 1071 Mbps," the firm wrote. "The speeds we measured in these three leading countries were significantly faster than the maximum speed in European markets where 5G has only just launched, such as Italy or Spain, or in the UK where the first operator to launch 5G only has 40MHz of suitable spectrum, which is far below 5G technology's 100MHz channel size sweet spot."

There's a simple reason the US recorded such high speeds: "Operators there are already able to use mmWave [millimeter-wave] spectrum for 5G," the firm wrote. "This is extremely high capacity and extremely fast spectrum but has very limited coverage compared with the 3.4-3.8GHz 5G 'midband' spectrum typically used in most of the other countries we analyzed, where mmWave spectrum is not yet available."

OpenSignal said it recorded its findings between April 1 and June 30. The firm did not provide details on the operators providing the speeds, but it's reasonable to assume that Verizon and AT&T are the operators behind OpenSignal's US results, as they were the only ones offering 5G services in mmWave spectrum during the firm's timeframe. OpenSignal obtains its network-performance data via applications installed on customers' phones.

OpenSignal isn't the only company offering a real-world look at 5G speeds in the US. For example, PCMag has taken in-depth looks at the performance of 5G across the nation's major wireless operators, as has Cnet.

To be clear, there's little doubt that overall 5G speeds will increase, just as they have on LTE. Indeed, initial LTE networks in the US launched with speeds of around 5 Mbit/s, and today US LTE speeds can sometimes exceed 100 Mbit/s or more.

"Opensignal expects 5G maximum speeds to continue to increase as 5G expands its reach," the firm wrote. "This is just the start of the 5G era and the market is moving quickly. More 5G services will launch using more spectrum and wider channels -- there are few 5G services currently using 5G's ideal 100MHz channel size -- and 5G technology evolves to be able to combine the performance of multiple 5G channels and bands together to boost both the maximum and average 5G speeds and further improve the mobile user experience of 5G users."

Cloud 4G 7/13/2019 | 1:12:00 AM
5G multiplies bandwidth Multiple bands and sub-bands aggregated for use with high-order MIMO ('massive' MIMO, Co-MIMO, MU-MIMO, MS-MIMO creates a signaling environment in which use is more flexible.  That is a foundational aspect of building virtualized RAN.

5G can be 100x faster than 4G.  However, that begs asking a structured set of questions/parameters including:

What spectra bands are available to the operator?

How will demands for the bandwidth, ultra-low latency, local -to-remote storage-server facilities that feed bandwidth, grow over the 1, 3, 5, 10 year time span?

The FCC is making about 120 times more spectra available. The use comes are variable costs of acquisition and deployment due to the range and other signaling properties.  It is not practical for that to be put to use to add capacity far ahead of market demand.  Operators must build networks 2-5 years ahead of demands while back-filling for unexpected broad and local growth patterns.

Cloud 4G 7/13/2019 | 12:52:10 AM
Re: Shannon Lives Here The Shannon (Shannon-Hartley) Theorem applies to the maximum signaling through a noise-impacted single-channel.  5G is about that but is much more about the use of multiple mode differentiation of signaling.

Shannon-Hartley had evolved to within a few tenths of a percent of practical limits.  Chip, device and equipment companies have come to rely on the use of multiple path, multiple spectrum band and sub-bands and tiered and vector differentiation methods.  Beam - formed MIMO including massive-MIMO array signaling far exceeds the gains made in the already near perfection S-H Theorem grains.  We can see this hastily in practice in the specifications of 5G and related RF chipsets.

Have you heard of 'Cooper's Law'?  Or of Moore, Alamouti, Cooper's Law'?  These describe the multiple-disciplinary impacts of using Shannon-Hartley optimized signaling magnified by multiple-station, multiple-channel band signaling.

Someone's shrimp is gonna be thrown on the barbie...

Duh! 7/8/2019 | 11:55:17 AM
Shannon Lives Here "Results generally indicate that operators' 5G speeds and coverage directly correlate to the types and amount of spectrum they're employing."

In other news: objects fall to the earth if you drop them, water flows from high pressure to low pressure, and energy is conserved.

Nothing magical about 5G. Somewhat better spectral efficiency than 4G, but Shannon's theorem still applies. The FCC gives wide allocations to the mm-wave bands and scrounges in the mid- and low bands.  mm-wave coverage requires lots of antennas. With 5G, you can have very high speeds, you can have very wide coverage or you can have reasonable deployment capex... just not all three at the same time.