Viacom's $340 million bet on Pluto TV signals that the programming giant sees a bright future in free, ad-supported streaming. The move also speaks to a grander strategy as Viacom looks to stake its claim in a growing direct-to-consumer marketplace that has lured in just about every media company across the sector, from Disney, AT&T's WarnerMedia and Comcast's NBCUniversal on down to a multitude of smaller content players.

Pluto TV, a linear-style OTT-TV service with more than 100 "channels," gives Viacom Inc. (NYSE: VIA) an answer the free side of the DTC ledger with a platform that can support content and programming from its various networks and brands -- everything from MTV, Nickelodeon, Comedy Central and BET to its other, more digitally-focused services such as AwesomenessTV. Viacom also views Pluto TV as an acquisition tool for subscription streaming products such as Noggin and Comedy Central Now, and as a platform, it can use to create a new Spanish-language offering. (See Viacom Buying Pluto TV for $340M .)

Pluto TV, which counted Sky among backers that had invested about $52 million in the company, has made its mark over the past six years, as it now claims to have more than 12 million monthly active users, including 7.5 million that access the service on connected TVs, that are all streaming "billions of minutes" of content each month. 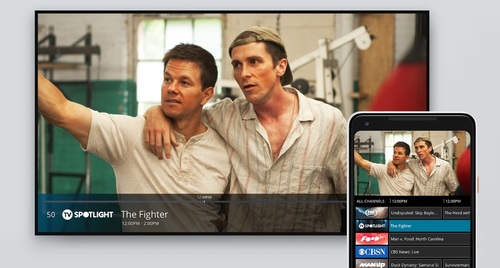 In addition to a lineup more than 100 linear-style streaming "channels," Pluto TV also offers a library of ad-supported VOD content across a wide range of TV-connected and mobile platforms.

Pluto TV has hung its hat on the free, ad-based model largely using a linear-type offering that lets viewers channel surf as if they were watching regular TV. Pluto TV's lineup features the kind of channels one might see on a pay-TV service, including programming from NBC News, Fox Sports, CNBC and Sky News, as well as a large blend of more specialized and curated offerings such as Shout! TV, People TV, NASA TV, Pluto TV Movies and MST3K.

Moreover, Pluto TV has established a service with some scale, regarding both users and the type of programming it offers, as ad-based free streaming becomes a hot, but increasingly crowded area. That sector includes services such as Tubi, Sony's Crackle, Xumo and Wurl Inc. , and has also attracted interest from big-name players such as Amazon.com Inc. (Nasdaq: AMZN) and Walmart-owned Vudu. (See Amazon Joins OTT's Big Free-for-All and Comcast Adds Tubi to X1's OTT Video Blend .)

According to TiVo's just-released "Video Trends Report," nearly one-third of the survey's 4,458 adult respondents in the US and Canada reported using a free streaming service in Q4 2018. And Pluto TV has proven to be a popular option in that group, with some 17% of survey respondents saying they used Pluto TV to stream video, behind services such as Snapchat (18.1%), Twitch (19.9%), Facebook (43.9%) and YouTube (57.9%). (See Consumer Interest in à la Carte Declining  TiVo Study.)

Free is a good place to be in the world of OTT. But's it's only part of the direct-to-consumer story for Viacom.

Viacom, naturally, has also sought out distribution with the various virtual MVPDs that have emerged in recent years to appeal to cord-cutters as well as consumers who, so far, have steered clear of traditional pay-TV services.

In addition to securing carriage on those various OTT-TV services, Viacom has taken a step beyond with its investment in Philo , the virtual MVPD that launched a national, entertainment-focused streaming service in November 2017 that starts at $16 per month. Last summer, Viacom deepened its investment in Philo by joining other programmers for a $40 million "C" round of funding that pushed Philo's total past $90 million. (See Philo Fills Coffers With $40M More.)

Video's direct-to-consumer is still at the early stages, but it's obvious that its future will be paved by an array of paid and ad-based, free options. But by putting up $340 million for Pluto TV, Viacom is most certainly spreading out its bets. But Viacom is likewise placing a sizable wager on an OTT category -- free -- that it believes will be a significant winner in the DTC race.

Like what we have to say? Click here to sign up to our daily newsletter
COMMENTS
Newest First | Oldest First | Threaded View
Add Comment
Be the first to post a comment regarding this story.
EDUCATIONAL RESOURCES
sponsor supplied content
(eBook): 5G Testing for the Race to Revenue
Trends in the Communications Industry
How to Gain the Edge in the Fiber Broadband Boom
A new approach to billing for a new generation of customers
CBRS Spectrum and the Future of Private Wireless Networks
Smart Edge: Productizing Edge Deployment
Interview: Open RAN enabling CSPs to deliver on the promise of 5G
Keynote: Open RAN: The Next Step
Educational Resources Archive
More Blogs from The Bauminator
Kimberly Maki lends SCTE a helping hand