Fans of the hockey-stick curve can look forward to a treat every June and November, when Ericsson publishes its well-tracked "mobility report."

Few pages are without a bar chart that shows rocketing growth in one technology or another between now and the mid-2020s, as the Swedish equipment vendor prognosticates on the future of mobile communications. In an industry used to modest (if any) improvements in sales, it is a rare opportunity to brandish the sort of growth numbers that usually turn up in Silicon Valley -- and to pretend they matter.

To the uninitiated, the most attention-grabbing figures are perhaps to be found in the section about the Internet of Things (IoT), an expression that describes a future utopia/dystopia (delete according to preference) in which everything from a toilet seat to a toaster has an Internet connection.

Ericsson expects the overall number of connected devices to rise from about 11 billion this year to around 25 billion by 2025. For the first time, it attaches numbers to NB-IoT and Cat-M, two cellular IoT technologies conceived almost by accident a few years ago during some frantic moments for the industry which, at the time, feared being usurped by non-cellular IoT upstarts. Ericsson, like a proud father, predicts these technologies will go from zero connections in 2017 to more than 2.5 billion by 2025. 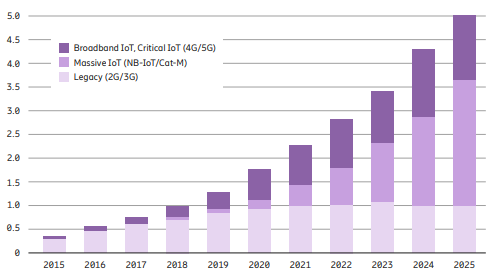 This is not unimaginable. Neither NB-IoT nor Cat-M got off to the best start in life, at least partly because they were rushed through the standardization process. Hardware costs have remained too high for many organizations, and there have been too few examples of ways to use the technologies. Telecom operators have struggled to flog services because they are used to marketing expensive smartphones for consumers, not temperature monitors for pregnant cows (yes, this really is a "use case"). But there are finally some encouraging signs.

The main one is that connections on NB-IoT and Cat-M networks have this year risen threefold, to around 100 million, according to Ericsson's research. That improvement suggests some of the teething troubles are in the past. Operators remain bullish, too. Vodafone, a major NB-IoT supporter, today has about 100 million IoT connections globally, said Nick Jeffery, the CEO of Vodafone UK, during a meeting with reporters last week. The operator is still heavily reliant on old-school 2G networks for IoT -- which partly explains why its UK arm plans to shut down 3G, but not 2G networks, by the end of 2021 -- and yet growth since this time last year, when Vodafone had 77 million IoT connections globally, may point to some NB-IoT momentum.

Despite this, Ericsson's forecasts will be viewed with considerable skepticism by grizzled industry veterans. While the mobility report is only a few years old (it started in 2014), the analyst and consulting sides of the telecom industry do not have a fabulous track record on predictions. Their worst mistake may have been at the turn of the century when some experts forecast that customer spending on mobile would double with the launch of 3G-based data services. As it happens, average revenues per user have continued to slide as mobile data networks have improved.

Similarly, the crystal-ball gazing of some technology giants has proven as sophisticated as the average newspaper horoscope. Cisco, which makes predictions when it is not building Internet routers, once famously decided the planet would have 25 billion IoT connections by 2015 and 50 billion by 2020. According to Ericsson's numbers for today, Cisco is about 14 billion connections short four years after that first date. And it will need to find another 39 billion connections next year to get the second forecast right.

With all their hockey stick curves and talk of explosive growth, Ericsson's mobility reports may also upset die-hard curmudgeons by creating a false impression the industry is in tip-top shape. Yes, 5G looks poised for dramatic adoption in the next few years. Yes, soaring levels of data traffic show consumers are hooked to their smartphones. But few in the telecom industry are benefiting. While still very profitable, heavily indebted European operators have been forced to pool resources to build 5G networks affordably. Ericsson and Nokia, its Finnish rival, survive on thin margins. Huawei, the world's biggest equipment vendor, no longer reports material growth at its networks business. These days, it is more interested in devices and artificial intelligence than 5G.

On the IoT side, all that forecast growth in NB-IoT and Cat-M is unlikely to excite telco shareholders. In Vodafone's last fiscal year, which it ended with 85 million IoT connections, the operator made 783 million ($862 million) in IoT revenues, a figure that equals less than 2% of total sales. If Vodafone continues to account for 8% of the world's cellular IoT connections, as Ericsson's latest report suggests it does today, then Vodafone could anticipate 400 million connections by 2025, based on Ericsson's forecasts. But it may struggle to retain this share as IoT specialists enter the market, and prices are falling. Generating more than a low-single-digit percentage of revenues from IoT sales will be difficult.

Financials aside, Ericsson's new IoT forecasts are a gamble. Predicting that 5G will eventually account for billions of connections is a relatively safe bet given telco commitments, levels of smartphone addiction, and the need to replace today's mobile broadband networks with more efficient technologies. The same cannot be said for more niche cellular IoT standards. A few years from now, the mobility reports published in 2019 may be the first anyone dredges up to prove Ericsson was spot on -- or as far off the mark as Cisco appears to be.

Like what we have to say? Click here to sign up to our daily newsletter
COMMENTS
Newest First | Oldest First | Threaded View
Add Comment
Be the first to post a comment regarding this story.
EDUCATIONAL RESOURCES
sponsor supplied content
eBook: Monetize the Enterprise - 6 Ways to Capture the B2B Opportunity
eBook: The 3 Key Digital Mediation Challenges - And How to Solve Them
Case Study: APAC CSP Boosts Efficiency of Enterprise Operations with CSG
Private 5G Networks and Testing
Which Path to Convergence Is Right for You?
Data Center Top Tips: 10 Issues That Can't Wait
DDoS Trends Report
The Challenge of 5G Security
Building the 5G experience
Grow Your Revenues With Innovative Customer Engagements and Business Models
Educational Resources Archive
More Blogs from Morris Lore
Public cloud holds perils, and don't expect an 'open' RAN with it