LAS VEGAS -- The CES show floor is brimming with connected, one-off Internet of Things (IoT) products, but the next generation of the ever-evolving smart home market will be defined by software platforms that can stitch those products together to create useful services and "experiences" for the consumer, execs in the sector insisted here this week.

Creating experiences is the "next horizon" for the smart home business, Fahri Diner, CEO of Plume Design, said on Monday at a press event held here at the Mirage hotel. While smart home and IoT remains a solid play at retail, the shift to platforms plays right into the hands of cable operators, telcos and other service providers that are building out smart home services and forging integrations with a focused blend of outside partners.

Plume, which works with major service providers such as Comcast, Charter, J:COM in Japan and Bell Canada, cut its teeth on providing whole-home WiFi products, but has since evolved its business with OpenSync, an open-source software/cloud platform that serves as an abstraction layer that can support a wide range of connected IoT devices from third parties. 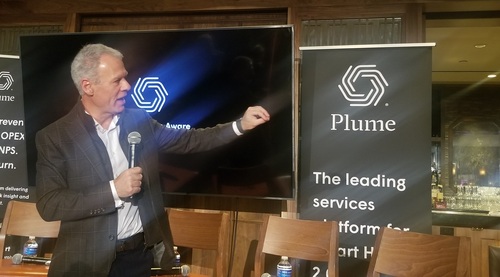 Using a common software platform driven by the cloud to create smart home experiences represents the 'next horizon' for the market, Plume CEO Fahri Diner says.

Those efforts, part of what the company likens to a broader movement toward "Smart Home 2.0," are also opening the door to new smart home services. Along those lines, Plume this week introduced Plume Motion, a motion detection enhancement developed in partnership with AI specialist Cognitive Systems.

Rather than requiring new cameras and other types of gear purpose-built to detect motion, Plume is using existing WiFi radios and compatible OpenSync nodes to detect motion in the home by analyzing the WiFi waves between those devices. The AI component of Plume Motion will, for example, will be able to detect pets and avoid false alarms, the company said. Plume said the new service will become available to all US Plume users on February 27 as part of their membership, but has yet to announce any commitments from its service provider partners.

Common thinking
Plume isn't alone in its thinking about how the smart home market is evolving.

As the market pivots away from end-point solutions, platforms, driven by software, are rapidly becoming the "brain and nerve center" for the smart home and other forms of IoT products, Brad Russell, Research Director, Connected Home, at Parks Associates, said at a session held on Tuesday morning.

That next phase is also entering the picture as the smart home market continues to grow and establish some true scale. According to new Parks Associates research, 38% of US broadband households owned a connected device (a category that includes pure smart home/automation products and not products such as smart speakers and video streamers) at the end of 2019, up 19% from 2018. About 18% of those homes now own a home control system, up 38% year-over-year, Russell said, calling that a "sleepy category" that has been waking up over the past four to five years and appears to have reached a tipping point.

Comcast has also taken the platform approach, using it to build on new smart home services, including a cybersecurity product that the operator is now rolling out to about 18 million qualified broadband customers for no added charge. Comcast, which got into the home security and automation game back in 2012, now has about 1.4 million subscribers for those products.

In addition to using that platform to build and launch a curated and integrated mix of smart home products and experiences, another aim is to help simplify things for the consumer, said Derrick Dicoi, VP, of strategy and product management at Comcast, noting that customers can access and manage those services on the TV (also supported by Comcast's voice remote) as well as through mobile apps.

Avoiding an IoT free-for-all
At the same time, industry execs warned that while there is a need to build platforms and new services based on deep integrations with third parties, some limits should be set around that openness.

"Don't conflate open with a free-for-all," warned Amber Kappa, VP of platform partnerships and business development at Samsung SmartThings. Platform providers, she added, need to remain vigilant about what partners are doing with the data they do have access to and to create strong protections around what data those partners have access to and how they are using it.

The goal should be to create a "highly curated platform" with best-of-breed partners rather than one that allows consumers to bolt on any IoT product, said Anne Ferguson, VP of marketing at Alarm.com. That more focused integration work will help to ensure that the consumer experience is both "easy and reliable," she added.