PRAGUE -- 2020 Vision Executive Summit -- For the last 15 years, the car industry has been tinkering like a never-satisfied mechanic with a technology called digital short-range communication (DSRC), or 802.11p. An IEEE-developed WiFi standard, DSRC is supposed to let a vehicle communicate with roadside infrastructure and systems, not to mention other vehicles. If the autonomous car is to one day become a reality, this capability will obviously be as critical as the brake pedal in any of today's vehicles.

But it might not come through DSRC alone. An emerging mobile technology known as cellular vehicle to anything (or C-V2X) is changing the roadmap entirely, according to Steve Bell, a senior analyst with the Heavy Reading market research group. C-V2X has the potential, says Bell, to navigate the pitfalls and drops that carmakers have previously encountered on the cellular journey. It could speed them more comfortably toward the finishing line of 5G.

So just what is C-V2X, and why is it so important?

For starters, the technology would make use of much of today's network infrastructure, built to support 4G communications, to provide connectivity services for cars and trucks. This would clearly reduce investment needs and give the car and telecom industries the expansive network they will need for certain applications. 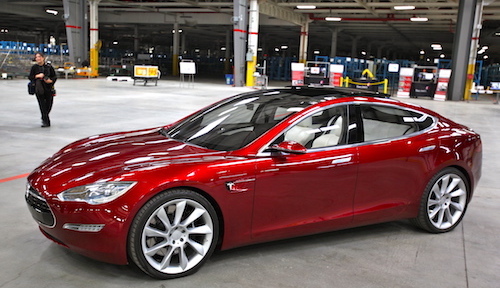 With its Model S and other hi-tech vehicles, Tesla has been at the forefront of the connected car industry.

What really rings Bell's bell, though, is that C-V2X wouldn't mean that DSRC disappears in the rear-view mirror, or need that big mobile network at all times. Right now, an industry group called the 5G Automotive Association, whose members include some of the world's biggest carmakers and telecom companies, seems eager to meld the best of DSRC with the advantages of 4G. "They are trying to promote this concept of using the software stack designed for DSRC on an LTE-based chipset," said Bell during a presentation at Light Reading's 2020 Vision Executive Summit in Prague this week.

This matters. The combination of DSRC and cellular would let car companies provide not only efficient vehicle-to-vehicle communications but also what Bell calls vehicle-to-pedestrian connectivity. "If you have a similar chipset that is doing direct-to-direct and also cellular LTE then the maker of the chipset starts to open up the ecosystem," says Bell. "You can also do network stuff, which links together with this whole roadmap of the car in a 5G future."

But C-V2X doesn't have to use the cellular network, and that's a paradigm shift for the industry. "It overcomes some of the barriers the carmakers have had," explains Bell. "One of those was the vehicle going dark if the network goes down. And vehicle-to-vehicle communications does not have to be SIM-based."

The industry clearly has a long way to go before the fully connected car is more than just a talking point. In the regulatory area alone, the makers of self-driving or semi-autonomous vehicles will have to get around numerous roadblocks, regardless of what happens on the technology front. But there already appears to be widespread support for the idea that C-V2X will play a big part in the connected car's future. When respondents to a recent Heavy Reading survey were asked which technologies would be used for autonomous vehicles, an overwhelming 92.2% backed a mix of cellular and DSRC as either "high probability" or "medium probability" choices, making this combination the most popular of nine survey options. "C-V2X could be big," says Bell.

For more about the connected car, switch lanes and check out Light Reading's sister site The Connected Car, which provides regular coverage of the sector.

ashleythompson 2/14/2018 | 8:23:48 AM
Turbo Boost This will be a great opportunity for companies like Las vegas towing services, and many others to manage the common challenges. Future looks bigger and better.
Reply | Post Message | MESSAGES LIST | START A BOARD

Phil_Britt 12/26/2017 | 4:52:18 PM
Re: Worthwhile Self-driving cars will likely have many stops and starts, but like moving from cranck-up engines to key starts to keyless starts and the other advances in between, the time is coming. Personally, I am looking forward to it because it should mean I can "drive" at an age when previous generations have had to give up their keys.
Reply | Post Message | MESSAGES LIST | START A BOARD

kq4ym 12/25/2017 | 9:08:54 AM
Re: Worthwhile While the benefits of low latency and direct communications without network supports are great, the time to wide adaption would seemingly have to be shortened to bring this to the connected car market sussessfully I would guess.
Reply | Post Message | MESSAGES LIST | START A BOARD