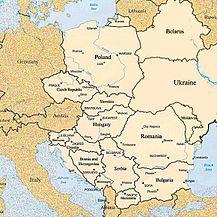 Besides opening up a world of new possibilities for customers, Slovak Telekom's introduction of a 300Mbit/s broadband service in August seemed to provide further evidence that Slovakia remains firmly in Europe's fast lane when it comes to fiber rollout.

Last year, the country's incumbent claimed to have extended its fiber network to some 362,000 households, making its VDSL service -- which uses a mixture of copper and fiber lines -- available to another 300,000. Rival Orange, meanwhile, reached the milestone of serving 100,000 fiber customers at the end of 2013.

In a country then with 1.13 million broadband connections (according to data from Point Topic), fiber has clearly taken a prominent role.

But Slovakia is just one example of Eastern Europe's flourishing fiber scene. The Baltic nations of Lithuania and Latvia regularly top rankings of European countries based on the penetration of fiber-to-the-home (FTTH) and fiber-to-the-building (FTTB) services, coming first and third respectively in the latest update from the FTTH Council Europe. Slovakia was seventh, while Bulgaria, Russia and Slovenia are also frontrunners in the fiber race.

According to data published earlier this year by market-research firm Analysys Mason, some 32% of broadband connections in a range of Eastern European countries were based on FTTH/B technology last year, compared with a paltry 3% in Western Europe, where copper-based DSL remains predominant. What explains the huge fiber lead that Eastern Europe has taken over its neighboring region?

Strange as it might seem, Eastern Europe's failure to develop a decent copper-based broadband market goes a long way towards answering that question. For one thing, old-fashioned copper networks have been poorly maintained and not made available to parts of the population in some countries, making the investment case for fiber rollout much stronger. As noted by China's Huawei Technologies Co. Ltd. , for operators with low-quality copper resources, there may be fewer challenges involved in rolling out fiber afresh than in attempting to "leverage legacy copper infrastructure."

Yet it's not only the quality of the copper that has counted. Analysys Mason points out that Eastern Europe's incumbents were relatively slow to launch wholesale services on their copper networks. While the UK's BT was being carved up by authorities, and forced to sell wholesale products to rivals at regulated prices, some Eastern European regulators appeared unable or reluctant to rein in former state-owned fixed-line monopolies that did not want to play the wholesale game.

Moreover, when wholesale products have become available, they have sometimes cost so much as to render them useless. As recently as June, European Union antitrust authorities were reported to be on the verge of fining Slovak Telekom for charging such high wholesale prices that customers could not hope to generate profits in the broadband retail market.

Such tactics, and the unavailability of local loop unbundling (whereby rivals take control of last-mile connections to homes and offices), have persuaded some competitors to invest in their own infrastructure -- using fiber -- rather than depend on intransigent incumbents.

What's more, the costs of deploying fiber networks have been much lower in Eastern Europe than other regions. Partly, that is because labor remains relatively inexpensive in many Eastern European countries. Yet the region's operators have also been able to deploy their networks "aerially," using masts and poles, instead of incurring the huge costs of digging up streets to lay fiber in ducts and tunnels, according to Analysys Mason.

Where Eastern Europe lags is on overall broadband take-up. Some 41% of households in the region were using fixed broadband services last year, according to the analyst firm, compared with 59% in Western Europe. And fiber has yet to find its way outside more densely populated areas, in many cases.

In that regard, at least, both Eastern and Western Europe are on common ground.

iainmorris 10/4/2014 | 5:05:53 PM
Spain Similar development can now be seen happening in Spain, where regulation doesn't affect Telefonica's higher speed broadband services and alternative operators have been forced to invest in their own infrastructure to compete against the incumbent.
Reply | Post Message | MESSAGES LIST | START A BOARD

Also, speaking of the Baltics, Estonia has the highest broadband penetration rate from all Eastern Europe. Broadband connectivity everywhere is necessary due to Estonia's digital economy. Free fast WiFi is available everywhere in public spaces.