What changed
Adtran was best known in the carrier space for strong access technologies -- by Stanton's admission, "HDSL kept the lights on," but it became apparent to company leadership that things were changing and the move away from purpose-built hardware was coming.

The software/services strategy was launched internally and generally embraced, the CEO says. "We are blessed with an incredibly strong engineering team -- it's hard to pivot when you don't have people to pivot with you," he says. "The biggest pushback we got was from people afraid to make that jump."

"That jump" was to software-defined access, where a lot of the value once delivered in integrated hardware-software models moved into the software itself, with the hardware becoming more of a commodity item. Layered on top of that was a services strategy, which put Adtran into the business of helping its customers actually execute a virtualization strategy in their access networks. More on that later.

Stanton and team sold the new strategy internally with a lot of what he calls grassroots communication, which continues today. He still personally meets with small groups of employees, 12 to 20 of them, three times a week, and counts on them to spread the word. And he says, he's been quick to address rumors that pop up and can undermine the process.

Adtran has also become quicker to bring new products to market and to launch new approaches to the market. Just this week, it announced the Adtran Mosaic Open Network Alliance, a partnership with other players in an ecosystem for testing and proving open SDN and NFV solutions. (See Adtran Builds Alliance Around Mosaic.

Stanton sees Adtran as being able to be a software integrator of multiple pieces, and thus able to do what perhaps many companies would expect a larger vendor to tackle. He admits larger vendors who might have "the wherewithal to muster a team to do software development will move quicker," but adds that they have more ground to cover, because of their legacy products.

Adtran is in a position to tackle network complexity -- including integration at a time when software is changing so rapidly -- that can cement its value to customers, if they can accept the company's new role. In some ways, that's what makes newer markets -- such as cable MSOs -- more attractive, because it's fresh turf for Adtran. That means new revenues in what is 60% of the broadband footprint in the US, and less of a need to reinvent an existing image. (See Adtran Seeks Cable Stardom With EPON Deal.)

"If you think about what is going on right now in cable -- their whole infrastructure business is shifting at a faster rate than what is going on in the carrier space," Stanton noted. "They are embracing virtual CCAPs at an accelerated pace. Some of their traditional vendors are flat-footed, which is creating an entry point that didn't exist before. And even if we win a small part of a market that is so big, it will be significant new revenues for us."

Throughout its Adtran Connect event -- which included Comcast's Rob Horwald as a speaker -- company representatives kept teasing the notion that a big Adtran win in this field is looming, without naming the company. Horvald spoke in general terms, but his presence was clearly an endorsement of some kind.

Where Adtran's software integration skills will also quickly translate is in the smaller telco market, which is where the company is making its bigger services play, with more than three dozen active projects in the US. As Kevin Barnes, vice president of Adtran's Services & Solutions Integration Portfolio, told the Adtran Connect audience, the vendor sees services as a win-win proposition, in the sense that it is not only new revenue but also an opportunity to accelerate the pace at which smaller network operators deploy new networks by doing a lot of the heavy lifting for them. 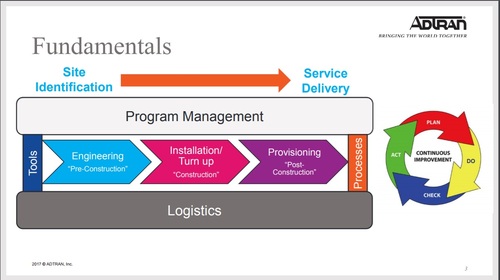 "We can do everything from site identification to actually turning up the service for the customer," Barnes said. And that includes integrating new things such as a Residential Central Office Re-architected as a Data Center (R-CORD) approach that brings small telcos into the distributed data world and gets them in position to launch new services more quickly.

As Barnes admitted, this isn't a cookie-cutter approach to doing things, but Adtran is developing common practices and processes around the different stages or "buckets" of work: engineering or pre-construction, installation/turn up/ construction and provisioning/post construction.

Next Page: Can services drive profits?