Juniper wants to provide the benefits of network virtualization without requiring its customers to rip out their equipment and replace it with something else -- something else from some other vendor than Juniper.

The company on Tuesday introduced Cloud-Grade Networking, designed to provide telemetry, automation, security and machine learning to help enterprises make the transition to the cloud.

Juniper is adding Node Slicing to its JunOS operating system, to allow network operators to put multiple network functions on a single router. 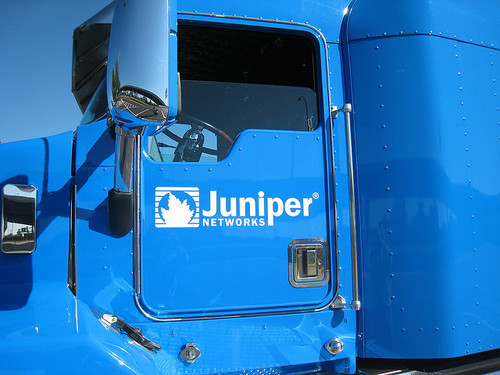 "The way I think about it is we're turning NFV on its head, and applying it to the existing routing infrastructure," Donyel Jones-Williams, Juniper Networks Inc. (NYSE: JNPR) director of product marketing, tells Enterprise Cloud News. NFV operates on standardized, white box devices. "Why can't I do the same thing on my purpose-built hardware?" With JunOS, operators can run separate virtual networks on a single router.

While white box has its place on the network edge and top-of-rack switches, Juniper's purpose-built hardware is still required on the core network, for reliability and investment protection, Jones-Williams said.

Also, a new Universal Chassis provides a common hardware form factor for the company's routers and switches, which will be available as different line cards in a common chassis, to simplify data center hardware deployments. The Universal Chassis supports Juniper's PTX10008, PTX10016, QFX10008 and QFX10016, with support for the Juniper MX to come.

And the company is adding support for Source Packet Routing in Networking (SPRING) to its wide-area SDN NorthStar controller, to improve traffic engineering and programmability, as well as adding real-time telemetry with the Junos Telemetry Interface (JIT).

Virtualizing networks is a common goal for networking vendors; it's central to Cisco's Application Centric Infrastructure (ACI) for its Nexus 9000 switches. And VMware is layering programmability on top of other vendors' networking hardware with NSX.

In that crowded market, Juniper is looking to differentiate by being a pure-play networking company -- not providing data center hardware, software and server virtualization like Cisco and VMware, but specializing in nothing but networking. (See What Is Juniper Nowadays?.)