Oracle's Ellison: Amazon & SAP Use Our Database Because We're Better

SAN FRANCISCO -- Oracle OpenWorld 2017 -- Larry Ellison doesn't miss an opportunity to slag the competition. He spent much of his one-hour-plus keynote Sunday night criticizing Amazon Web Services, along with a few moments to tear a new hole in SAP.

"They are one of the biggest Oracle users on Planet Earth," Ellison said.

Neither Amazon nor SAP could be reached for comment Sunday night.

For Amazon, at least, the competition with Oracle is one-sided. As of the second quarter of 2017, AWS controls 34% of the infrastructure and platform cloud markets, as well as hosted private cloud, according to Synergy Research. Second-place Microsoft Corp. (Nasdaq: MSFT) has about 11% and Google (Nasdaq: GOOG) has 5%. The next ten players combined, which include Oracle, account for less than 20% of the market, and lost 1% market share over the preceding four quarters. (See AWS, Despite Slowdown, Reigns Over Cloud Market  Report.)

Best Seats in the House 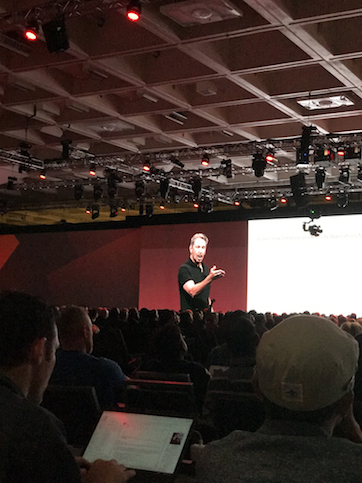 In addition to throwing shade on the competition, Ellison provided further information about Oracle's upcoming Oracle Autonomous Database Cloud -- with comparison to Amazon Redshift -- due to ship in December for data warehousing applications, followed by online transaction processing in June, as well as an Express entry-level and NoSQL, or nonrelational, version, also next year. (See Oracle's Ellison: We'll Beat Amazon Cloud Pricing by Half and Upcoming Oracle DB Hits All Buzzwords.)

Ellison demonstrated what he claimed were several tests of Oracle's software running on Oracle's own cloud, versus Oracle on AWS, versus Redshift on AWS.

Ellison spent the early part of his keynote touting automated security and administration in Autonomous Database Cloud. He namechecked the Equifax leak, which, he noted has been blamed on Equifax's failure to patch its software.

"The biggest threat by far in cybersecurity is data theft," Ellison said. "And preventing data theft is all about securing your data."

Automation will be key to securing data, he said.

And the service will patch itself without going down -- no need to find a time to take the database down for routine maintenance, during which time attackers can break in to the unpatched system; the software can instead patch itself in real time, Ellison said. "No delay, no human intervention," he said.

The Autonomous Database Cloud's automation extends to elasticity -- it scales up and down hardware resources as needed, in real time, saving enterprises the need to buy extra capacity to cover demand surges.

The automation drives down cost, Ellison said. He repeated and elaborated on a guarantee he made two weeks ago. "Our bill will be less than half of what Amazon will charge you. You can move a workload from Redshift to an Oracle database; we will guarantee in writing contractually, before looking at the workload, that your bill will be one half or less of what Amazon charges you. We will write that in your contract."

Ellison's presentation style is unique. He's a charismatic speaker, quick to ad lib -- or appear to ad lib. His slides are plain and unadorned text and simple charts. Unlike other top industry executives, he doesn't do light shows. He just takes the stage and talks.

As is often the case with Ellison's presentations, he had difficulty finding the right slides a couple of times. But he made that difficulty work for the theme of automation.

As the wrong slide displayed, Ellison broke from the normal sequence to hold up his clicker, which, he said, did not actually advance the slides itself.

kq4ym 10/15/2017 | 11:36:41 AM
Re: Focus on the Positive It looks like he's selling the sizzle here, playing up the downtime numbers compared to the competiton, cost comparisons and security. Pretty typical stuff it seems in order to try to increase that market share.
Reply | Post Message | MESSAGES LIST | START A BOARD

mhhfive 10/4/2017 | 1:38:03 PM
Re: Equifax security..? Being in the C-suite at Equifax certainly sounds like a dream job to me. You can completely fail at doing anything other than nudging the company towards higher profits (which arguably isn't even something the CEO has a huge effect on) -- and STILL retire with a golden parachute while the wreckage burns.

I also personally witnessed an "interim CEO" preside over an old company in backruptcy while making a million+ salary. I don't understand how anyone is paid that much to do something that doesn't appear to be a situation where turning any knobs matters at all.
Reply | Post Message | MESSAGES LIST | START A BOARD

Even now: CEO Richard Smith is retiring with $90 million. I know people who are working nonstop on Wall Street or Silicon Valley in the hope of doing the same -- amassing a fortune and then quitting work forever. And they'd do it for 10% of the money Smith is getting.
Reply | Post Message | MESSAGES LIST | START A BOARD

mhhfive 10/2/2017 | 5:08:14 PM
Re: Equifax security..? Equifax had full time employees presumably tasked with security... but they just didn't do a very good job of it. It's a bit amazing how inept Equifax performed its technical security in hindsight. And it really makes you wonder what the other credit agencies are doing right now.
Reply | Post Message | MESSAGES LIST | START A BOARD

mhhfive 10/2/2017 | 5:05:49 PM
Re: Focus on the Positive Oracle has plenty of advantages still. But it's also one of the more expensive database options, so you kinda get what you pay for. It doesn't need to trash its competitors but I suppose anything to slow down the growth of the competition helps Oracle. So many legacy systems are built on Oracle-owned products. I think the only way to slow down the database disruption is for Oracle to acquire more and more of its competitors.
Reply | Post Message | MESSAGES LIST | START A BOARD

Phil_Britt 10/2/2017 | 3:53:58 PM
Re: Focus on the Positive T-Mobile has a lot of fun poking at AT&T and Verizon, but even when he does that Legere still points out what he sees as the T-Mobile advantages. Bashing the competition is often a strategy when a company has nothing better to offer.
Reply | Post Message | MESSAGES LIST | START A BOARD

Mitch Wagner 10/2/2017 | 3:50:54 PM
Re: Focus on the Positive There is definitely something to be said for that. I enjoy writing these articles but does it help Oracle sell?
Reply | Post Message | MESSAGES LIST | START A BOARD

Mitch Wagner 10/2/2017 | 3:36:27 PM
Re: Equifax security..? Cloud providers will say they are better prepared to secure data because they have full-time people devoted to it.
Reply | Post Message | MESSAGES LIST | START A BOARD

mhhfive 10/2/2017 | 3:22:14 PM
Equifax security..? It's a bit strange to bring up Equifax as an example... I wonder what platform Equifax used? Its own private cloud/datacenter? Is that an argument for shifting PII data storage to 3rd party cloud services then?

mhhfive 10/2/2017 | 3:19:34 PM
Re: Focus on the Positive There's also the other explanation that AWS and SAP use Oracle simply because: legacy support... everyone has to support some legacy stuff, and Oracle is the king of legacy systems for databases. That may change someday, though.

MariaDB is getting some signficant backing.. and there are plenty of other options for database solutions.

The real question is: is Oracle maintaining/growing market share or losing it now? Google has shifted away from MySQL to MariaDB, I think.... and a lot of big platforms aren't starting with Oracle anymore (like they used to during the dot-com boom days, decades ago).
Reply | Post Message | MESSAGES LIST | START A BOARD
Page 1 / 2   >   >>
EDUCATIONAL RESOURCES