Google Cloud, Fastest Growing of Them All

Citing a strength in machine learning and an emphasis on enterprise scale, Google CEO Sundar Pichai boasted a new milestone for Google Cloud in the company's latest quarterly earnings call. According to publicly available data, Pichai posited that Google Cloud Platform is now the fastest-growing major public cloud provider in the world.

As a whole, the Google Cloud business currently has a run rate of more than $4 billion annually. That revenue comes from a combination of Google Cloud and the company's G Suite products.

The cloud division still represents only a small fraction of Google (Nasdaq: GOOG)'s overall revenue, but executives repeatedly point out that it's one of three big bets the business is making as it pivots to an "AI-first company." The others include YouTube and Google's consumer hardware business.

For the fourth quarter, Google parent company Alphabet Inc. posted revenues of $32.32 billion, beating analyst estimates of $31.9 billion, according to Thomson Reuters. Earnings were a miss, however, with the company reporting an EPS of $9.70 compared to analyst forecasts of $10 earnings per share for the final quarter of 2017. Total revenue for the year topped out at $110.9 billion, up 23% from the year previous.

On the cloud front, CFO Ruth Porat noted once again that the business is gaining more employees than any other segment of the company, "consistent with the priority we place on this business." (See Google Gears to Scale Cloud.)

Pichai also spotlighted the work the company has done to ensure it can support even the largest businesses as cloud customers.

"We've been doing cloud now for 19 years ... but where the momentum is really coming from is for the last two years we've put a lot of effort to make sure we are enterprise-scale-ready," said Pichai. "So now we can handle any type of enterprise -- any kind of regulatory complexities, security complexity and so on."

The result, he added, is "we are signing customers who are very large across the globe." 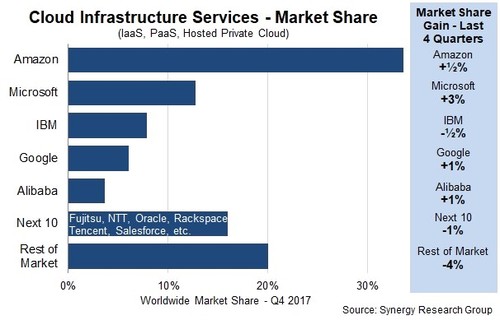 But as analyst firm Synergy Research Group notes, the total cloud market continues to grow, with the rate of growth actually rising in the latest quarter. Google continues to earn an increasing share of that growing pie, with its market share up 1% in Q4.

kq4ym 2/27/2018 | 11:53:33 AM
Re: Pie charts! It is sometimes more readily visible to see the pie chart with Amazon taking the big portion, pointing out how much it's lead over the other two or three big guys really is making Amazon the elephant in the pie pan.
Reply | Post Message | MESSAGES LIST | START A BOARD

kq4ym 2/7/2018 | 8:41:32 AM
Re: Pie charts! While Google is boasting of it's readiness now to handle the biggest businesses and it's increasing market share it's obviously got a long long way to go to capture what may be needed especially as Alibata seems to be steadfastly moving forward at a good clip as well.
Reply | Post Message | MESSAGES LIST | START A BOARD

mhhfive 2/2/2018 | 12:41:43 PM
Pie charts! I really wish they'd make these marketshare charts into pie charts, instead of bar graphs... just my personal preference visually. It's fascinating to see how dominate Amazon is with about a third of the entire market.
Reply | Post Message | MESSAGES LIST | START A BOARD
EDUCATIONAL RESOURCES