GE Digital is expanding the reach of its Predix Internet of Things (IoT) management platform thanks to a new cloud partnership with Microsoft Azure.

Worldwide support is expected in the first quarter of 2018.

Predix is GE's attempt to gain better control and management of the Industrial Internet of Things (IIoT). It's a platform-as-a-service (PaaS) offering that helps collect and analyze data from connected devices and sensors. 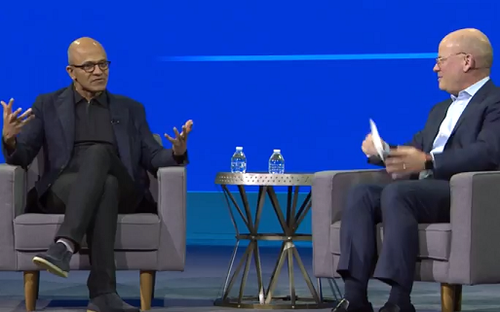 The platform includes the company's Asset Performance Management (APM) software, which uses the data that the sensors collect to make predictions about different pieces of industrial equipment. APM can then provide recommendations about maintenance and other actions that a company can take. It can also keep track of regulatory and compliance concerns.

While GE has been selling Predix to customers, it's also a large user of the platform itself, and recently installed it in a facility in Atlanta that oversees some 500 power plants. (See GE Keeps the Lights on With IoT.)

With the Microsoft and GE partnership, Azure will not only support the main Predix platform, but the company's APM software as well. In addition, Azure will support GE's Asset Answers, a diagnostics tool that provides additional insights and visibility into the data produced by industrial assets.

In a talk with Flannery at the Minds + Machines show, Nadella noted that digital transformation has changed the way companies look at their physical assets. The increased use of digital twins -- a virtual blueprint of a physical asset -- as well as the growing field of IIoT has made companies rethink their strategies.

"The age we are living in is about creating these digital feedback loops that help impact some type of outcome," Nadella said, adding: "The thing that is different is that it is not just a system of record that is tracking an asset or a system of engagement but these systems of intelligence."

For its part, GE wants to stay as cloud agnostic as possible, and is working on a multi-cloud strategy not only for itself, but for its customers well. In addition to its partnership with Azure, the company recently announced it had signed a large deal to use Amazon Web Service for infrastructure-as-a-service (IaaS). (See AWS Delivering Cloud to GE.)

However, at a recent show in New York, GE CIO Jim Fowler noted that he supports public cloud and does not want to expand his company's use of private cloud since the costs savings are in the public model. (See ONUG Shifts Focus to Security, Analytics.)

Editor's Note: This article originally misidentified the CEO of GE. His name is John Flannery.

Michelle 11/7/2017 | 1:46:17 PM
Re: expand good I can't imagine the regulatory burden they must face. I deal with a little bit of regulation in my job, but it's no match for the number of sectors GE works with. I sure hope Azure stays on top of the many regulations.
Reply | Post Message | MESSAGES LIST | START A BOARD

kq4ym 11/6/2017 | 9:47:49 AM
Re: expand good One can imagine the potential quagmire of regulationsa giant companies like GE have to deal with on a continuing basis. Getting to a place where manually keeping track of changing requirements and trying to predict coming regulatory changes early will certainly payoff as they move forward in cloud processing and AI.
Reply | Post Message | MESSAGES LIST | START A BOARD

Michelle 10/30/2017 | 6:59:19 PM
Re: expand good Sounds great to me. The added benefit of regulatory compliance should be really helpful. Cloud can help a lot when done well.
Reply | Post Message | MESSAGES LIST | START A BOARD

kq4ym 10/30/2017 | 5:06:40 PM
Re: expand good The cooperation between the two giants should prove productive. Noting how the programs will make alterts about "maintenance and other actions that a company can take. It can also keep track of regulatory and compliance," which should be a huge time and money saver for all the systems GE runs around the world in addition to the hundreds of power plants being monitored.
Reply | Post Message | MESSAGES LIST | START A BOARD

Michelle 10/30/2017 | 1:08:29 PM
Re: expand good It might be safest to stay away from Google Cloud for now. I think you could be right about adding it eventually. I suspect demand will drive that decision in the future.
Reply | Post Message | MESSAGES LIST | START A BOARD

Scott_Ferguson 10/30/2017 | 9:25:51 AM
Re: expand good @Michelle: GE has ties to both AWS and Azure so they are pretty open to public cloud at this point. They also have a large private cloud but the company is trying to limit that. So not sure if they will expand and use Google Cloud. My feeling is that they will at some point but right now they are sticking with AWS and Azure.
Reply | Post Message | MESSAGES LIST | START A BOARD

Michelle 10/29/2017 | 6:38:33 PM
expand good Adding support for Azure is a great move from GE. They're giving customers an option to use a platform they use for other purposes. I have a feeling they may not extend support to Google Cloud. I could be wrong.
Reply | Post Message | MESSAGES LIST | START A BOARD
EDUCATIONAL RESOURCES

Ericssons Cloud RAN e-book: A comprehensive guide to adopting, deploying, and scaling virtualized 5G in your networks
The Four Key Components of Cloud RAN
How to get the most out of 5G mid-band in Cloud RAN
Cloud Transformation
More Blogs from Scott Ferguson
Podcast: Agile IT & the Rush Toward Digital Transformation - Sponsored by SAP