Don't expect your business to run on quantum computing this year. Or next year either.

Or, more precisely, IBM sees the first commercial applications for quantum computing emerging in five years, probably in chemistry or materials science, he says. Other possible applications include financial data and global logistics.

Quantum computing is one of several technologies that IBM is betting will be big. Others include blockchain and artificial intelligence (where that bet is already beginning to pay off). But quantum computing is still a long way from arriving.

He adds, "IBM wants to be in the forefront of any computing technology, and quantum computing will be a big part of the future of computing."

IBM hit a quantum computing milestone last week with the launch of Q System One, which it bills as the "world's first integrated, universal approximate quantum computing system designed for scientific and commercial use." Fully integrated means that all the components are designed to work together as a unit, not assembled out of disparate pieces as previous quantum computers have been, Annuniziata says. 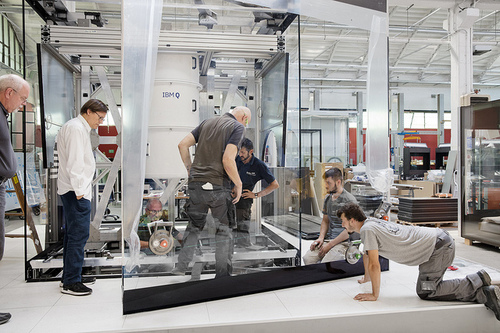 The IBM Q System One, being assembled. Photo by IBM.

The System One is housed in a nine-foot by nine-foot case of half-inch-thick borosilicate glass forming a sealed, airtight exposure. It opens using a technique IBM calls "roto-translation" for maintainance and upgrades minimizing downtime.

Organizations can access System One over the cloud, IBM says.

And IBM will open a Q Quantum Computation Center in Poughkeepsie, New York, for commercial use of quantum computing.