Google's Diane Greene Opens Up on Her Life & Career

SAN FRANCISCO -- Salesforce Dreamforce -- Salesforce CEO Marc Benioff displayed fine journalism chops, interviewing Google Cloud CEO Diane Greene about the enterprise cloud, her career and her life -- including an anecdote about how her father lost his business when a competitor falsely accused him of being a communist.

Benioff and Greene talked for about 50 minutes Tuesday at an event billed as a "fireside chat" at Salesforce.com Inc. 's annual customer and partner conference here.

The conversation followed an announcement Monday that Google will work with Salesforce on integrating online and offline analytics. Google will also become a preferred infrastructure provider, and the two companies will partner on offering the G Suite application suite to enterprises. (See Google Joins With Salesforce to Mix Online, Offline Customer Analytics.)

"My father was accused of being a communist," Greene said, describing a family incident that she says is relevant today. He was an aeronautical engineer and ran an aircraft company, and a competitor turned him in on a false accusation. "He was just a good capitalist. He lost his security clearance and he couldn't be the CEO of this aircraft company."

He later became a draftsman and "reinvented himself" as a civil engineer, Greene said. He sued the US government twice, once to regain his security clearance and the second time for compensation.

She grew up in Annapolis -- although, she said, Wikipedia states incorrectly that it was Rochester, which she said she finds amusing.

As of Tuesday night, hours after the event, Greene's Wikipedia entry states she was born in Annapolis, though the footer lists her among "People From Rochester." 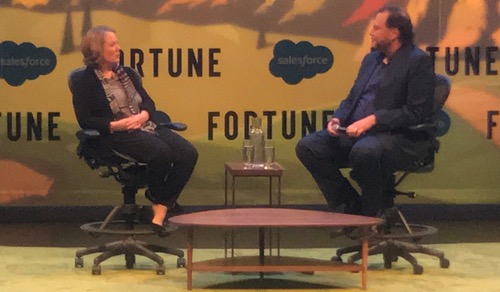 Greene and Benioff
Keep up with the latest enterprise cloud news and insights. Sign up for the weekly Enterprise Cloud News newsletter.

Greene initially went to MIT for grad school and studied naval architecture, and went to work in the oil industry. She wanted to go offshore, but women were not permitted to that. She learned FORTRAN and returned to school to study computer science at Berkeley.

That was the peak of women involvement in computer science, and female participation is only now returning to those levels, Greene said.

She recently discussed with Gloria Steinem the issue of why women involvement in computer science was high at first, and then declined. According to Greene, Steinem said, "Whenever a field is starting out there's no established ways of doing things and gender doesn't matter. And everyone is investing in this new field. But as soon as money comes in and status comes in, the men come in and take over."

Greene said she had the conversation with Steinem on a nine-hour flight they shared. "It really was one of my most wonderful experiences," Greene said.

Greene met her husband, Mendel Rosenblum, at Berkeley, and he gave her a ride on a motorcycle. She was a stay-at-home mother for a while, and then she and Rosenblum founded VMware Inc. (NYSE: VMW) based on research he'd done on virtualization. She had a second child.

Greene continued working as CEO and was allowed to run things her way, she said.

Benioff said, "You were doing a phenomenal job and you were on the way to a billion revenue."

Greene remembers convincing then-EMC CEO Joe Tucci to give her a "huge tranche" of stock to give to employees when the company hit $1 billion. Tucci didn't believe it could happen, so he agreed to do it. She took the company public and left a year later, she said.

Benioff said, "It's probably one of the most successful stories in the software industry, and I don't think there's been a more successful female CEO."

Next page: Transition to Google

kq4ym 11/22/2017 | 3:59:11 PM
Re: Fascinating Greene certainly has had an interesting and varies career. It will be fascinating to watch Google's Cloud business as it progresses over the decade. While it's the "fastest growing part of Google's business," it will be interesting to see if it becomes a major profit maker as well.
Reply | Post Message | MESSAGES LIST | START A BOARD

mhhfive 11/16/2017 | 1:21:29 PM
Google's Cloud vs.. I think Google has done a great job with its long-term cloud strategy, but MSFT and AWS simply have more of the "Rolodex"-factor for gaining customers. Google's one weakness (but it's a huge one) is that it isn't well-known for great customer service. Amazon has built a decent reputation for efficient customer service, and MSFT generally has a "devil you know" rep. Google is probably more of an "unknown unknown" when it comes to how it treats its customers.
Reply | Post Message | MESSAGES LIST | START A BOARD

Susan Fourtané 11/12/2017 | 6:10:12 PM
Leadership and looking into the future "Also, I don't really like to tell everybody what to do. I like for people to figure out what to do. ...  This is how a good leader leads. This has been a very enjoyable read. Although the question at the end asking for Greenes predictions for the next 10 to 20 years should have focus in the next five years, instead. Considering the speed in technological developments today, its impossible for anyone to see that far into the future. But well, being asked that question was not her fault.
Reply | Post Message | MESSAGES LIST | START A BOARD

Susan Fourtané 11/12/2017 | 3:48:59 PM
Fascinating Fascinating story. Tucci didnt believe it could happen, so he agreed to do it. Sometimes all what it takes to push an idea and be successful is to believe you can do it. It takes great confidence in yourself and in your abilities.
Reply | Post Message | MESSAGES LIST | START A BOARD
EDUCATIONAL RESOURCES
sponsor supplied content
IDC Whitepaper: Key Considerations When Operationalizing Artificial Intelligence Strategy
Design Guide: best-in-class hybrid IT infrastructure with AWS Outposts
Blueprint: optimize data exchange with AWS Outposts
Ericssons Cloud RAN e-book: A comprehensive guide to adopting, deploying, and scaling virtualized 5G in your networks
The Four Key Components of Cloud RAN
How to get the most out of 5G mid-band in Cloud RAN
QCT Introduces New Innovative Family of Edge Servers for the Telco Marketplace.
TOOL - Interactive Experience: Learn how to Evolve your Architecture and Monetize Next Generation Metro and Edge Networks
Whitepaper  Achieving IP/Optical Convergence: Building from Existing Networks
Executive Guide  Enabling Next-Generation Metro and Edge Networks for Communications Service Providers
Educational Resources Archive
More Blogs from Wagners Ring
Podcast: Don't Call Us an SD-WAN Provider  Cato Networks