Amazon Web Services CEO Andy Jassy has stepped up his long-running war of words with Larry Ellison, Oracle's bellicose founder and CTO. And this time Jassy also threw punches at Microsoft and brought in a telco, Globe Telecom, to talk about their transition from Oracle to AWS..

And Globe Telecom Inc. CIO Pebbles Sy-Manalang came onto the AWS stage to discuss how the Philippine telco saved money and increased efficiency making the transition from Oracle to AWS. 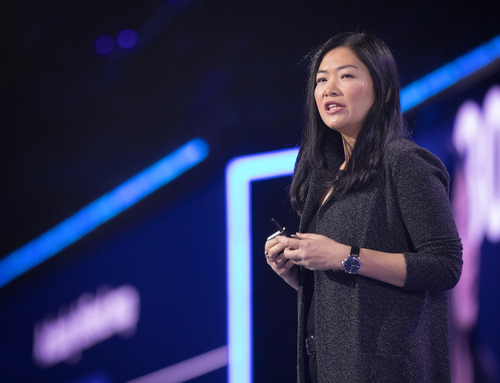 Globe Telecom's Pebbles Sy Manalang.
Now entering its fifth year, the 2020 Vision Executive Summit is an exclusive meeting of global CSP executives focused on navigating the disruptive forces at work in telecom today. Join us in Lisbon on December 4-6 to meet with fellow experts as we define the future of next-gen communications and how to make it profitable.

Conversion away from relational databases was one of several trends that Jassy cited as driving the transition to cloud -- and AWS's strategy. Others include the move to containers and serverless, new developments in machine learning, edge computing, augmented reality and virtual reality and robotics. More on that soon.

Globe Telecom migrated from Oracle to AWS as part of multi-year transition to cloud infrastructure, Sy-Manalang said. "Today we are seeing better performance at 1/10 the cost."

The telco has 65 million mobile subscribers, 400,000 small and midsized enterprise customers, with 1.2 million retailers and distributors. It has a goal of connecting 2 million homes with high speed broadband at 50 Mbps speed, aiming to bring 90% of Filipino people online. That required IT transformation to become more agile, which drove Globe Telecom to the AWS cloud, said Sy-Manalang.

The telco went to a cloud-first strategy in 2014, migrating 50% of its infrastructure by 2015, reducing provisioning time from 80 days to five days, and then to two days by 2016, when 90% of new infrastructure went to the cloud. Last year, Globe Telecom expanded its hybrid cloud, and this year it's moving its legacy systems and rearchitecting applications to be cloud native.

As part of that migration, Globe Telecom went from Oracle to AWS PostgreSQL, reducing its Oracle footprint by 10% for a 4x performance improvement, and reducing license and support fees by $1 million, Sy-Manalang said.

Additionally, Globe Telecom streamlined its call center in partnership with Amdocs. Previously, more than 3,000 agents had to toggle across 31 screens, frustrating customers. Amdocs worked with AWS and Globe Telecom on a new call center infrastructure, which went live a few weeks ago, and is expected to result in significant handling time reduction, Sy-Manalang said.