Greene, who co-founded VMware Inc. (NYSE: VMW), "is one of the most respected executives in enterprise technology," but "hasn't managed to move the needle on Google Cloud 's business since joining two years ago," writes Kevin McLaughlin on The Information Friday (paid registration required).

It's an exaggeration to say Greene "hasn't managed to move the needle." McLaughlin himself notes that Google Cloud sales rose 76% in the third quarter from a year earlier, which is hardly sluggish. But Microsoft Azure 's growth rate was 90% in the same period. Amazon Web Services Inc. grew 42% -- much slower than Google's growth, but coming from a much bigger base, as AWS leads the market by a huge amount. (See AWS, Azure Lead $35B+ Public Cloud Market.)

Google Cloud's market share is 6%, up two percentage points since the beginning of 2016, according to Synergy Research Group. AWS lifted its share to 34% from 33% and Azure grew from 8% to 12%, McLaughlin says.

McLaughlin says he's "reading the tea leaves" of Bryant's appointment to COO. Bryant's last job was running Intel's Data Center Group, a $17 billion revenue business. Google Cloud's estimated revenue last year was $1 billion -- a big step down for Bryant, unless the plan is for Bryant to move into the Google cloud top spot, the writer at The Information says. 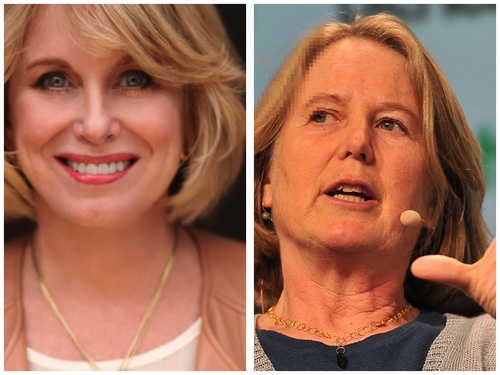 Bryant has a "deep enterprise background" including "long-standing relationships with Fortune 500 customers, which have also been a top sales target for Ms. Greene," McLaughlin says. (See Intel's Diane Bryant Jumps Over to Google Cloud.)

Greene will likely stay on at Google "in some capacity," perhaps focused on strategy, as she is a big draw for engineers and enterprise executives. But Bryant will "emerge as the public face for Google Cloud at conferences and industry events" next year, McLaughlin says. (See Google's Diane Greene Opens Up on Her Life & Career.)

For more background about Google, see our March report: Is Google's Big Enterprise Bet Paying Off?

Update: Google responds: "The article by The Information is complete speculation and could not be further from the truth. Diane Greene has been building a stellar team of enterprise executives, the most recent additions being Paul-Henri Ferrand and Diane Bryant. This is possible because in the two short years that Diane has been leading Google Cloud, its products and go to market organization have become completely enterprise ready, resulting in phenomenal traction with customers and partners. According to a variety of analysts, Google Cloud is the fastest growing public cloud today."

Ariella 12/31/2017 | 5:11:51 PM
Re: Change with purpose @Joe yes, that would be the pattern for such books.  Think of all the books on the conspiracy behind JFK's assassination.
Reply | Post Message | MESSAGES LIST | START A BOARD

That's how it works in other areas of politics and business. No reason why it wouldn't work here.
Reply | Post Message | MESSAGES LIST | START A BOARD

Ariella 12/30/2017 | 7:46:43 PM
Re: Change with purpose @Joe Yes, that's true. Of course, people are free to speculate and offer their views as facts, but we're not likely to ever get the full picture.
Reply | Post Message | MESSAGES LIST | START A BOARD

Joe Stanganelli 12/30/2017 | 5:21:57 PM
Re: Change with purpose @Ariella: A book sure would be interesting, but generally those kinds of high-level terminations/etc. tend to come with NDAs.
Reply | Post Message | MESSAGES LIST | START A BOARD


Either way, both represent working cultures, apparently, where diversity of opinions is not necessarily valued.

kq4ym 12/30/2017 | 4:22:14 PM
Re: Change with purpose It's always interesting to me to see how executives are so widely praised or blamed for corporate sales and profits. It would be interesting to see if in fact there's lots of other factors much more important, and changing of the guard may well be for lots of other reasons beside the bottom lines.
Reply | Post Message | MESSAGES LIST | START A BOARD

Ariella 12/28/2017 | 3:55:37 PM
Re: Change with purpose @Joe that's true. This is another instance in which we may see effects but not know all the forces at play behind the scenes. Someone may one day reveal some of those in a book, but even then, we'd just be getting their point of view on it.
Reply | Post Message | MESSAGES LIST | START A BOARD

[email protected] 12/26/2017 | 12:43:20 PM
Re: Change with purpose Joe yes the politics of these jobs are brutal and there is always a power play in motion. Knowing exactly what causes the leadership change is really known only to a few on most situations and legalities will always cloud the departures.
Reply | Post Message | MESSAGES LIST | START A BOARD

TheTXBigDog 12/26/2017 | 11:59:24 AM
Re: Change with purpose If anyone has ever watched Diane present, as an executive, it is just sad. Also, the VMware team she brought on board are nowhere near what Public Cloiud needs. Their view of the market is "build it they will come". Google is getting their asses kicked in every enterprise deal by AWS. Enterprise customers would like a dual Cloud solution but Google is not even in these deals. Just adding sales pressure when AWS has so much more to offer customers, isn't getting it done.

People hate working at AWS but now are starting to hate working at Google, in the field. Azure wins hands down as the best Cloud provider to work for.
Reply | Post Message | MESSAGES LIST | START A BOARD
Page 1 / 2   >   >>
EDUCATIONAL RESOURCES