IBM engages in systematic discrimination against older workers, according to an investigation by ProPublica, a nonprofit investigative journalism organization.

As the high-tech market became more challenging, IBM "reacted with a strategy that, in the words of one confidential planning document, would 'correct seniority mix,'" according to the report, published in conjunction with a feature from Mother Jones magazine titled "Cutting 'Old Heads' at IBM."

IBM "slashed its U.S. workforce by as much as three-quarters from its 1980s peak, replacing a substantial share with younger, less-experienced and lower-paid workers and sending many positions overseas. ProPublica estimates that in the past five years alone, IBM has eliminated more than 20,000 American employees ages 40 and over, about 60 percent of its estimated total U.S. job cuts during those years."

The report continues, "In making these cuts, IBM has flouted or outflanked U.S. laws and regulations intended to protect later-career workers from age discrimination, according to a ProPublica review of internal company documents, legal filings and public records, as well as information provided via interviews and questionnaires filled out by more than 1,000 former IBM employees." 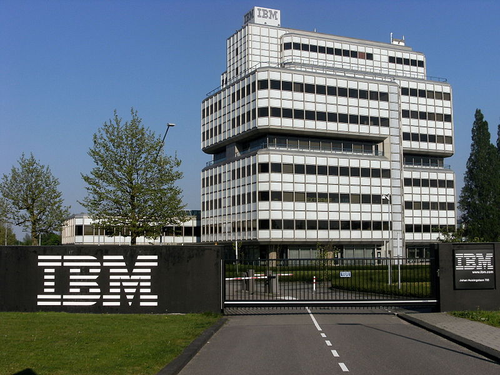 IBM building in Amsterdam. Photo by Mark Ahsmann (Own work) [CC BY-SA 3.0], via Wikimedia Commons.
You're invited to attend Light Readings Big Communications Event -- the one event that delivers fresh perspective on the rapid transformation of the telecom industry and the road ahead. We'll see you May 14-16 in Austin -- communications service providers get in free!

IBM "[t]argeted people for layoffs and firings with techniques that tilted against older workers, even when the company rated them high performers. In some instances, the money saved from the departures went toward hiring young replacements," ProPublica says.

In response to ProPublic's queries, an IBM spokesperson told the organization: "We are proud of our company and our employees' ability to reinvent themselves era after era, while always complying with the law. Our ability to do this is why we are the only tech company that has not only survived but thrived for more than 100 years," according to the report.

We have a query in to IBM this morning; we haven't heard back from them.

ProPublica alleges that IBM engaged in a strategic push to tilt the workforce toward millennials, as part of its shift to cloud services, big data analytics, mobile, security and social media.

mendyk 3/23/2018 | 9:27:03 AM
Re: Wow I've learned first, second, and third hand that IBM is far from being alone in the "wash away the gray" movement. Businesses are set up to make long-term workers a liability at some point.
Reply | Post Message | MESSAGES LIST | START A BOARD

rocket101 3/22/2018 | 9:50:16 PM
Re: Wow Ginni Rometty and her mafia team will do whatever to look good in front of Wallstreet. The article says everything that one needs to know how awful IBM has been. IBM has zero loyalty towards America.
Reply | Post Message | MESSAGES LIST | START A BOARD

Phil_Britt 3/22/2018 | 9:35:05 PM
Re: Wow It's not just tech workers, some of their long-time PR people recently left. I used to write a blog through a subcontract arrangement. When IBM cut ties with the contractor, I contacted IBM directly. They knew my work, liked my work, and offered to let me "volunteer" to write for them.
Reply | Post Message | MESSAGES LIST | START A BOARD

rocket101 3/22/2018 | 8:26:23 PM
Re: Wow So True!!!! IBM needs to be taken to task. They should be renamed Small Blue. Third grade company, always discriminating against Older tech workers and outsourcing to cheaper places. Fire the CEO.
Reply | Post Message | MESSAGES LIST | START A BOARD