The Walt Disney Company's results may have been well and truly hammered by the effects of the COVID-19 pandemic in its third quarter to June 27 2020, but one service stood out: the recently launched Disney+ streaming service. 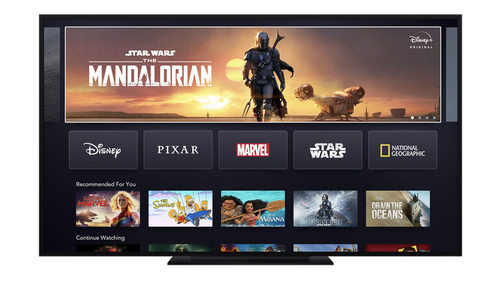 Baby Yoda: The Mandalorian, part of the Star Wars universe, is streaming only on Disney+.
(Source: Disney)

While some segments such as the theme parks and cruise ship business were adversely affected as customers were forced to stay at home, the streaming service proved popular with those looking for simple distractions or new forms of entertainment.

Bob Havek, CEO of Disney, put the success of Disney+ down to a focus on growing the global direct-to-consumer (DTC) business, noting paid DTC subscribers (including Disney+, Hulu and ESPN+) now exceed 100 million.

This is the way
Paolo Pescatore, technology, media & telco analyst at PP Foresight, said DTC services will be key to Disney's future growth.

"The company smashed its own target for Disney+ – 60-90 million subscribers by 2024 – four years ahead of schedule," he said.

"Though it has been late to the streaming market, it is making good progress in a short period of time. This enables the company to have a closer and more meaningful relationship with the customer.

"Knowing more about a user's habits can give them the confidence to create more big blockbusters and franchises."

Disney+ launched in the US as well as Australia, Canada, Netherlands, New Zealand and Puerto Rico in November 2019.

In March 2020, it expanded to Austria, Germany, Ireland, Italy, Spain, Switzerland, and the UK, followed by France and India (Disney+ Hotstar) in April and Japan in June.

In Europe, Disney has also formed exclusive deals with local operators, such as Deutsche Telekom in Germany, O2 in the UK, Telefonica in Spain, TIM in Italy and Canal+ in France.

Who tells your story
There have been some concerns over the lack of bespoke and exclusive content on Disney+, although Pescatore noted that Mulan is due to premiere on the streaming service on September 4.

"I've been impressed with the continuous slate of new programming that has and continues to be available on Disney+," he said.

"There's plenty to keep the entire household entertained. Kids enjoy watching the same shows and movies over and over."

The service has also fast-tracked release of titles including Hamilton and Frozen II due to the coronavirus pandemic.

However, Pescatore warned that Disney must continue to aggressively promote its growing suite of video streaming services given the competitive nature of this market.

"There are too many services chasing too few dollars. Disney needs to ensure a growing slate of successful shows to ensure services like Disney+ remain an indispensable part of a household's TV needs," he said.

"Success will always come down to content. A halt in production of new blockbusters will hurt all providers. In this regard, Netflix still leads in having a broad catalog."

Disney said DTC and international revenues for the fiscal third quarter increased 2% to $4 billion, while the operating loss increased from $562 million to $706 million due to costs associated with the ongoing launch of Disney+, partially offset by higher results at Star and ESPN+.

Group revenue in the first three quarters was broadly flat at $50.6 billion, although the group plunged to a loss of $2.122 billion from a year-ago profit of $9.648 billion.