The Wit & Wisdom of David Hughes

LONDON -- David Hughes has little patience with telecom service providers who make excuses or blame others -- regulators and vendors -- for their problems or pace in managing a digital transformation.

As vice president of engineering for PCCW Ltd. (NYSE: PCW; Hong Kong: 0008), Hughes is familiar with the challenges of getting legacy operations and support systems ready to handle virtualized infrastructure and demand for faster, more nimble service delivery. He's overseen the Hong Kong-based carrier's data center evolution and NFV development for the past three years. But speaking at last week's "OSS in the Era of SDN & NFV" event in London, the former US Marine said some of telecom's problems are self-inflicted.

"What is holding us back is we've got a bad case of the 'poor mes'," Hughes said "Poor me, I'm regulated. Poor me, I can't do all these things. Poor me, I don't have any money. I was in the Marine Corps, for what it's worth, and we had an expression there, we can do so much with so little for so long that we can do absolutely anything with nothing." 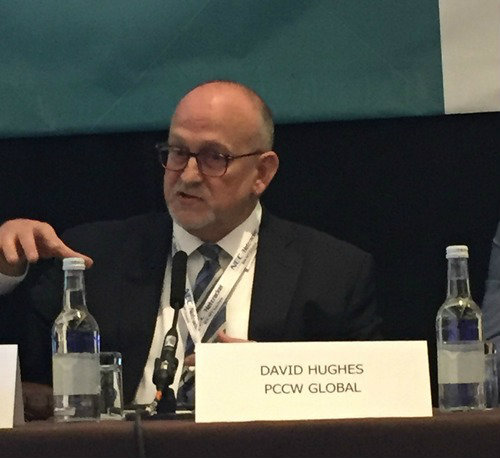 Earlier in the day, he had also challenged telecom operators to start doing more things for themselves instead of relying on and complaining about vendors.

"Maybe it's time we mature a little bit, and learn how to do for ourselves," said Hughes, whose 15 years at PCCW hasn't dulled his Southern drawl. "We are always talking about this whole need to reduce costs, and that's up there with 'the government is here to help you,' it's a lie. You are never going to reduce costs, what you hope to do is better manage your costs."

Hughes didn't just chastise the industry, however, he also had some solid advice. To wit:

The last comment came right before Hughes shared his thoughts about common data models, which have already appeared in Light Reading twice. If you haven't seen them, just search for "pigs will fly." (See Heavy Reading: Common Data Models Unlikely and ONAP Takes Flak as Telcos Prep for Release 1.)

Because he used humor and folksiness, Hughes took some of the sting out of his critical comments, but they were nonetheless quite pointed -- and timely. The good news is, he projects a real sense that telecom operators are far from helpless when it comes to charting their own course, and directing their own change.

kq4ym 11/21/2017 | 10:58:53 AM
Re: Crumbs Yes, imagine that scenario if all the transport vehicles just died. Or all the power stations in an area. Quite a lot of question and answers awaiting to solve the complex issues and tradeoffs to be considered in systems design.
Reply | Post Message | MESSAGES LIST | START A BOARD

mendyk 11/10/2017 | 9:39:12 AM
Re: Crumbs There are exceptions to every generality. For every Wozniak, there are 100 non-Wozniaks. Or maybe 117 of them. And they basically work from the same playbook. As for this iteration of automation being different, it will be when the degree of automation allows for autonomous operation of networks. That's not something that will happen for a while, but it will happen. The focus of automation -- not just nonmanual labor but also thinking -- also makes this different, but that's not specific to telecom. As for outsourcing, you get what you pay for. I wouldn't trust a mission-essential job to temps. I'm not even sure the CXO playbook would advocate for that.
Reply | Post Message | MESSAGES LIST | START A BOARD

It is that last bit that I would argue with.  That is a pretty broad brush to paint say Steve Wozniak with.  Employment is a business transaction.  An employee (including the CEO) is selling their time and effort for the money they make.  Good leaders recognize good employees and work to retain them when they can.  But circumstance does not mean that this is a permanent thing.  It is like any other contract.  Unfortunately, people talk about "loyalty" to a corporation.  The purpose of a corporation is to make the shareholders money.  Any notions beyond that are just invalid.  Why would some shareholder in some mutual fund care anything about any person at the company?  All of that is lies that we like to tell ourselves.  The best public venue for that is the NFL.  The day that a player is no longer useful, he is cut.  If there is public sentiment for him (which might lead to lowered revenue if he is upset), then the team might ease him out of his job.  I assume that is why they sign indivdual contracts, otherwise teams would have to go through the entire process that normal employers do to fire someone.

And you have posted about automation and job loss in other threads.  In at least one of those, you considered this automation different than other examples.

And there is a completely simple way to deal with retention issues.  Outsource the work if people quit so that you have a better flexible staffing model.  Since none of the work that they do does not matter in the long term, the loss of the IP to the subcontractor really doesn't matter.  Which, by the way, is one of the huge advantages that the cable guys have had.

Duh! 11/9/2017 | 2:56:44 PM
Re: Crumbs As long as we have TCP slow-start and congestion avoidance, latency is a proxy for throughput. In an era of 1G access/100+G transport, prop delay is the overwhelmingly dominant source of latency: 4.9 µs/km.
Reply | Post Message | MESSAGES LIST | START A BOARD

mendyk 11/9/2017 | 9:39:45 AM
Re: Crumbs Not sure where you get the "this is different" message. In this specific case, you are pulling in a limited number of people who are going to enable the automation that will let your company ultimately reduce its headcount in a significant way (theoretically). If your concern is that you won't be able to retain the people who will make that transition possible, then you need to figure out a way to retain those people. It's pretty simple -- and has almost no chance of being adopted because people in management tend to have close to zero respect for the people whose work makes their own jobs possible. And they tend to have very limited abilities to solve problems creatively.
Reply | Post Message | MESSAGES LIST | START A BOARD

brooks7 11/9/2017 | 1:34:07 AM
Re: Crumbs That is an optimization Carol.  They better be able to drive when the network is completely dead or they will go noplace - literally.  So they might be connected, but completely 100% functional disconnected.  Imagnine a DDOS attack stopping all cars in the US.  See what I mean?

Carol Wilson 11/8/2017 | 11:23:46 PM
Re: Crumbs Self-driving cars  will also be connected cars. Traffic and safety information will still have to come into the car, from external sources.
Reply | Post Message | MESSAGES LIST | START A BOARD

brooks7 11/8/2017 | 7:45:32 PM
Re: Crumbs Of course, if you put the computer in the car then you don't have to worry about the hiccup in comms driving your car into the wall (in other words, self driving cars MUST be self-contained).