Huawei Prepares for Possible Life Without US Suppliers

China's Huawei has been developing alternatives to US component suppliers such as NeoPhotonics and Lumentum to minimize disruption caused by US measures against it, the company's head of global government affairs has confirmed.

The controversial Chinese vendor, deemed a security threat by Western opponents, has also implemented rules to limit the levels of US technology found in its products, Light Reading can reveal.

Under a strategy called "business continuity management," Huawei will be able to develop products based on its current supply chain as well as "Huawei solutions" in future, said Victor Zhang in a wide-ranging discussion about the challenges facing the Chinese vendor.

Asked if this meant finding possible substitutes for NeoPhotonics and Lumentum, specialist US vendors that have been optical component suppliers to Huawei for years, Zhang said: "Exactly. We have the capability to mitigate the supply chain risk. If there are components we cannot find, we need to redesign."

Zhang was previously the CEO of Huawei's UK business and before that was instrumental in landing Huawei's contract to build optical transmission systems for BT under the UK phone company's 21CN project. With a background as a software engineer for optical transmission systems, he insists Huawei's optical solutions are "far ahead of the industry" -- a claim that would be widely disputed -- and says "there are not risks involved for our optical solutions and for 5G solutions in future." 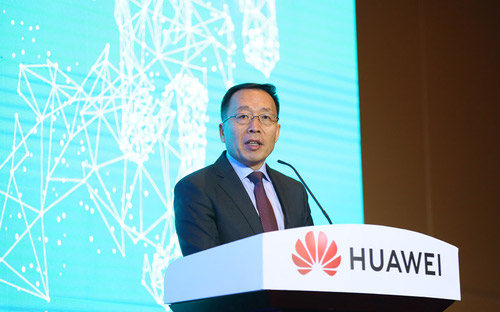 Huawei's access to vital US components was threatened when US officials recently added its name to the so-called "Entity List." US suppliers cannot serve organizations on that list without a special license, which the US government can withhold if it sees any risk to security.

Hardliners in President Donald Trump's administration see Huawei as a possible conduit for Chinese spies, a charge the vendor has vehemently denied. Opponents also accuse it of ripping off US intellectual property and selling network equipment to Iran, in breach of US trade sanctions.

US suppliers including NeoPhotonics and Lumentum are understood to have considered exploiting a loophole in trade restrictions that allows them to serve Huawei if their products are based on technology not deemed to be of US origin. NeoPhotonics offers products developed in Japan as an alternative to its US components, while Lumentum's recent takeover of rival Oclaro has also given it Japanese and British alternatives, according to Michael Genovese, an equity analyst with MKM Partners.

The solution is not ideal because the components that NeoPhotonics makes in the US are superior to its Japanese products, says Genovese.

A relaxation of the trade blacklisting seemed possible when Trump said US companies would be allowed to sell products to Huawei if there were "no great national emergency problem with it," following a meeting with Chinese President Xi Jinping at the recent G20 summit in Japan.

But Huawei's name has not been removed from the Entity List and it is still evaluating the impact of recent political developments, Zhang told Light Reading.

Experts say the uncertainty has persuaded Huawei to ensure it is less dependent on a global supply chain and fear the ramifications for some international players.

Dave Kang, an analyst with investment bank B Riley FBR, reckons Chinese "internalization" of the supply chain could deal a major blow to the optical industry. "This is based on our latest checks which have revealed that Huawei has significantly accelerated the internalization process of its supply chain," he wrote in a research note issued on July 9. "As such, it appears that the US optical industry is facing collateral damage from the trade war with China."

Zhang insists his company would prefer to maintain access to a global supply chain. "Even when we have our own components and our own chipsets, we still purchase from America or Japan or other countries because we believe that openness and collaboration are very important for the development of innovation," he said.

De minimis gets maximum attention
Nevertheless, under its business continuity management strategy, Huawei has already limited the amount of US "origin content" (technology elements) in products made outside the US to just 25% to guard against supply chain disruption.

In a sign of US influence over global supply chains, manufacturers outside the US are prohibited under US Export Administration Regulations (EAR) from selling certain products to Huawei that exceed this 25% threshold. The rules appear to explain why companies such as ARM, a UK-based designer of microprocessors (owned by Japan's SoftBank), was reported in May to have suspended relations with Huawei, after the Chinese vendor's name turned up on the Entity List.

In a blog about this so-called "de minimis" rule, law firm Sheppard Mullin Richter & Hampton says the EAR restrictions do not currently apply to US products exempt from export-licensing regulations. But any extension of these restrictions -- and, let's face it, nothing can be ruled out these days -- would impact "an enormous number of foreign-made goods that use commercial, off-the-shelf US parts and technology, from being sold to Huawei," says the law firm.

Even in its existing form, the rule has already limited the opportunities for companies based outside the US, according to a Huawei spokesperson. "Lots of non-US companies have been affected because they may have a de minimis level that is above 25%," he says. "We have ensured that principle is built into the BCM [business continuity management strategy] so that products and solutions we have already are not above that 25% level. That is very well understood by customers."

Export restrictions may also be affecting Huawei's own US organization. According to a report in yesterday's Wall Street Journal, which cites people familiar with the matter, Huawei is now planning to lay off hundreds of staff based in the US, many of which work at Futurewei Technologies, its US R&D subsidiary, which currently employs about 850 people.

Futurewei staff are said to have faced restrictions on their ability to communicate with colleagues in China ever since Huawei's name appeared on the Entity List.

Zhang played down concern about the impact of the US-China trade dispute on standardization efforts. "Currently we don't see any impact on 5G standards development," he said. "The 3GPP and others are working very smoothly to develop a 5G standard. It is not just a single country that can make that."

Some analysts think a trade war could lead to industry fragmentation and the emergence of 5G standards for specific regions.

We're not sure about that, but I'm thinking that's very difficult for Huawei. Let see how's going.

FardiNK 7/17/2019 | 8:49:21 AM
Shift in power It has been long underway, but this might definitively confirm the shift in power between USA and China. When such big companies ditch The US, it is worrying signs for the future of USA's economy