Dish Network signs up for US military's 5G plans

Dish Network expressed interest in working with the US Department of Defense (DoD) in 5G.

Specifically, the company said it would help construct a 5G network using spectrum currently owned by the US military, and also offered the military a slice of its planned 5G network.

If the DoD agrees to some or all of Dish's proposals, the development would give Dish a potentially major new supporter for its planned $10 billion nationwide 5G network running across its own vast spectrum holdings.

"Dish is deploying a cloud-native, next generation, standalone 5G network using multiple commercial nationwide spectrum bands (between 600MHz and 2GHz) and CBRS spectrum," the company wrote in a filing to the DoD. "By bringing together innovations such as the distributed cloud, edge computing and network slicing, our software-based network could provide the DoD a customizable, secure network solution on our commercially-deployed spectrum bands, in addition to new DoD spectrum. Access and capacity to the network resources could be either dedicated or shared, or multiple network slices could be established with different service level agreements."

Continued Dish: "The network functionality enables the DoD to manage and control their slice of the network and allocated spectrum as if it were a private DoD operated network. The advantage of access to commercially-deployed spectrum is the availability of a robust commercial device ecosystem and the coverage available through the entire Dish network." 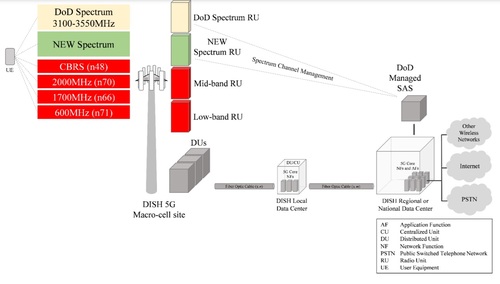 In its filing, Dish outlined how its network might be used in conjunction with DoD spectrum. Click here for a larger version of this image.
(Source: Dish)

Dish also said the US military can put its radios on top of Dish's cell towers in order to transmit signals in spectrum owned by the DoD. The company argued that its rivals like AT&T and Verizon cannot accommodate that kind of a design because they aren't using open RAN technology. Such technology promises to unlock the proprietary connections between various elements of a wireless network, including radios.

"By deploying an open-RAN, cloud-native architecture, US-based vendors can develop software and hardware that can be integrated and deployed at scale more rapidly than a vertically integrated environment with incumbent wireless vendors," Dish explained. 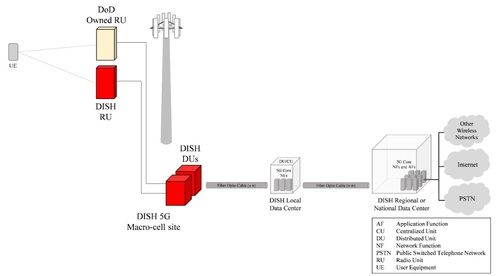 In its filing, Dish said radio units (RUs) owned by the DoD could sit next to its own radios, with everything connected via open RAN (radio access network) technology. Click here for a larger version of this image.
(Source: Dish)

Dish also argued that its proposal will ensure that US military communications would remain secure.

"Any DoD network slice would be built on virtual network functions (vNFs) designed by companies who operate within the US or other allied countries, and are controlled by US entities or those of other allied countries," Dish wrote. "Dish is deploying this type of a network and can provide network slices with the ability to fully isolate these slices from other commercial or government customers within the network. The Dish architecture is based on cloud native principles that can allow the DoD to add additional security and monitoring measures, as needed, to the DoD slices. The core vNFs, as well as any backups or copies, reside within the US. Critical intellectual property and core source code are also within the US. The Dish network design is based on an O-RAN topology that allows for interoperability of different radio unit providers through an open architecture. This limits the dependency and supply chain risk of a single vertically integrated provider, and supports the quick isolation of affected segments of the network. An O-RAN architecture provides added security benefits and monitoring capabilities."

As the Wall Street Journal reported, Dish's embrace of the DoD's 5G ambitions runs directly counter to the positions of its rivals. Both AT&T and Verizon have rejected the idea of the DoD leasing or sharing its spectrum with commercial users.

Dish's 21-page proposal is a response to a Request for Information issued by the DoD in September that in part asks "How could DoD own and operate 5G networks for its domestic operations?" That language sparked concerns that the US government was planning some kind of "nationalized" 5G network, but a Pentagon spokesperson clarified recently that "DoD has no plans to own and operate a nationwide 5G network. However, as the RFI asked, DoD is exploring the idea of owning and operating a 5G network on military bases. If, after assessment of the RFI inputs, it's determined DoD can own and operate 5G on our installations we will pursue funding through our normal budget process."

Don't miss your opportunity to learn more about the next phase of 5G deployments and advanced use cases! Join us for the 5G Transport & Networking Strategies Event on Nov. 3 and 5. This digital symposium is an opportunity to learn from industry experts and get your questions answered in real time. Register today!

In its filing, Dish added its own opposition to the idea of the DoD building its own national 5G network.

"Dish respectfully opposes any proposal to create a nationalized, government-owned and operated 5G network," the company wrote. "We believe that the task for DoD to build and deploy all of the equipment and systems, including, but not limited to: hardware, software, power systems, physical towers, optical fiber cable systems and microwave radios, is an inefficient use of DoD resources."

But Dish said it's open to the idea of the DoD operating 5G networks on military bases.

"It may be possible for the DoD to deploy a dedicated network within each DoD facility and interconnect with national commercial operators to roam onto the commercial networks for additional coverage and capacity," Dish wrote. "However, the device interoperability between the different networks will be limited and expensive, depending on the scale of the device ecosystem."

However, the DoD controls roughly 450MHz of midband spectrum that would be ideal for commercial 5G operations. As a result, the commercial US wireless industry has been clamoring for the federal government to re-allocate some or all of the DoD's spectrum resources for commercial operations.

The DoD did just that this summer when it announced plans to release 100MHz in the 3.45-3.55GHz band for 5G via an FCC auction next year. US wireless network operators like Verizon and AT&T typically prefer purchasing spectrum licenses via auctions that provide them with exclusive access to that spectrum.

However, the DoD announced last week that it would likely not release any more spectrum to the commercial industry directly, and instead would look at ways to share its spectrum holdings rather than releasing them outright via auctions.