Chinese chipmaker courted by Apple faces risk of US sanctions

The long arm of the US law has reached deep into China's technology sector once again, threatening to squash a possible deal between iPhone maker Apple and YMTC, a Wuhan-based maker of memory chips. The pretext appears to be YMTC's sale of chips to Huawei for inclusion in a forthcoming smartphone. Odd though it might seem, that would contravene American trade rules and give Joe Biden's government the legal justification it needs to add YMTC to the Entity List, cutting it off from Apple.

An investigation into YMTC's commercial arrangements with Huawei has now been kicked off by the US government, according to a Financial Times (FT) story out today (paywall applies). The UK newspaper claims to have seen a report written by TechInsights, an analyst firm, indicating YMTC memory chips feature in a new Huawei smartphone. An official at the Bureau of Industry and Security (BIS), an offshoot of the US commerce department, appears to have described that as "credible" to the FT. 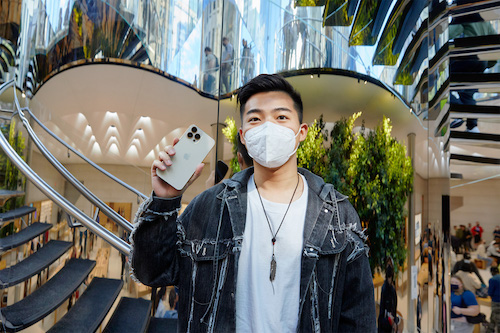 Sales of iPhones have boomed in China during the last few quarters.
"(Source: Apple)

Huawei, which makes network equipment as well as smartphones, is already named on the Entity List, meaning it is effectively barred from obtaining US technologies. A deal with YMTC would violate the rules because the Chinese chipmaker has seemingly bought manufacturing gear from US suppliers.

Timothy Arcuri, a UBS analyst, went unchallenged when he identified YMTC as a customer of Applied Materials on a results call with the US company's executives in February 2020. Later that year, a report written by James Mulvenon, a China expert for SOS International, named Applied Materials as YMTC's "largest foreign supplier of tools and equipment." Mulvenon also reckoned YMTC had bought tools from Lam Research and KLA, two other US companies.

While none of those US firms lists individual customers in financial disclosures, their sales to China have rocketed in the last few years, according to filings with the US Securities and Exchange Commission. Back in 2017, they made about $4.2 billion in China revenues. Last year, that figure had soared to nearly $14.5 billion. Growth came despite the US sanctions imposed on SMIC, China's largest semiconductor foundry, which was added to the US Entity List in December 2020. The China sales generated by Applied Materials, Lam Research and KLA rose by $4.4 billion in the recent fiscal year.

Sanctions penalizing YMTC would badly hurt the US companies, which could explain why US authorities have not previously clamped down. Last year, Applied Materials generated about a third of its total sales in China, while Lam Research has become increasingly dependent on the country. For the quarter ending in December last year, it derived 26% of revenues from Chinese business. That percentage had risen to 31% the subsequent quarter. It is a similar story at KLA, which booked 28% of sales from China in the second half of 2021. 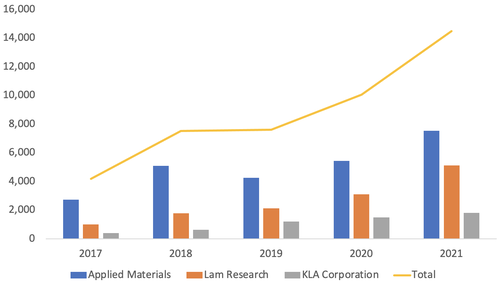 But US political opposition to YMTC has grown since news appeared of talks between Apple and YMTC. In March, a Credit Suisse report obtained by Light Reading said Apple was then evaluating YMTC memory chips for inclusion in the forthcoming iPhone 14. On March 31, Senator Marco Rubio, a prominent China critic, wrote to Apple CEO Tim Cook to voice his displeasure.

"YMTC is a rapidly expanding, state-owned company with extensive links to the Chinese Communist Party's (CCP) armed wing, the People's Liberation Army (PLA)," he wrote, citing Light Reading's story. "It is unacceptable that sales of the next generation of iPhones would end up strengthening the Chinese military and put the lives of American service-members at risk as a result."

To critics such as Rubio, the drawbacks of a deal between Apple and YMTC far outweigh the impact sanctions would have on Applied Materials, Lam Research and KLA. According to a White House report on supply chain vulnerabilities, published in June last year, YMTC has now received as much as $24 billion in subsidies from Chinese government sources and may currently have the capacity to produce about 200,000 wafers per month, more than twice what Intel can manage. This, said the report, makes YMTC "a potential low-cost threat to US-based memory companies."

"Dominance in the semiconductor market is a key objective of the Chinese Communist Party's 'Made in China 2025' plan, which seeks to satisfy 70% of the country's demand for chips domestically within the next five years," warned Roslyn Layton of the China Tech Threat group in a Forbes article last year. "To achieve that goal, the Chinese government has used state-owned companies to pilfer sensitive US-made 'dual-use' technologies, which have both civilian and military applications."

The question is why Apple would even consider YMTC as a partner given the potential blowback. It already has a long list of existing suppliers and options, including Samsung (South Korea), Kioxia (Japan) and SK Hynix (South Korea), and YMTC has lagged these rivals on technology performance, according to Credit Suisse. Nor is it likely to have a pricing advantage over Samsung, according to Richard Windsor of Radio Free Mobile. "Samsung has been the global leader for years and is able to undercut all of its competitors on price and still make money while they are losing money," he wrote in a recent blog.

Component shortages could explain the Apple diversification strategy. An alternative, reckons Windsor, is that Apple came under Chinese government pressure to include YMTC chips in the iPhones sold within China. Rather like Applied Materials, Apple has become heavily reliant on China for sales and sales growth. Its revenues there rose 21% year-on-year for the recent December-ending quarter, to about $25.8 billion, making China its fastest-growing geographical market.

US action against YMTC would risk a tit-for-tat response by China, with Apple as the possible target. The problem for China's government, notes Windsor, is the popularity of Apple's products among Chinese consumers. A ban or restriction "would not be well received," he pointed out in his blog.

None of these developments bode well for Huawei, whose pool of viable suppliers continues to shrink. Cut off from US technology, its revenues sank nearly 30% in 2021 after years of growth and the company this week issued a warning that 2022 could be even nastier. "We believe that in 2022 we are actually facing more daunting challenges, given the external environment," said Ken Hu, Huawei's current rotating chairman. Mere survival has become the priority.