Investors look chuffed with the latest results from Cellnex, a growing force in Europe's busy market for telecom towers, despite a widening of its net loss this year.

The Spanish company's share price was trading up 4% in Madrid just before noon and is worth 50% more than it was this time last year  not bad, considering the economic crisis outside China, and an improvement that most telecom CEOs would envy in good times.

And that's ignoring various other deals that cover everything from fiber-optic equipment to connectivity gear installed on the Madrid underground.

Its sprawling footprint will now take in about 73,000 sites, a tenfold increase since 2014. Cellnex has exploded in size.

Not all existing sites have been acquired, but most have. The latest statement points to a 70% increase in overall "points of presence" in the last year. Organically, the growth rate was just 5%.

And that frenzy of takeover activity explains why some of the numbers have exploded, too.

Revenues for the first nine months soared 53%, to about 1.15 billion ($1.35 billion), compared with the year-earlier period. Earnings (before interest, tax, depreciation and amortization) rose 68%, to 838 million ($984 million). 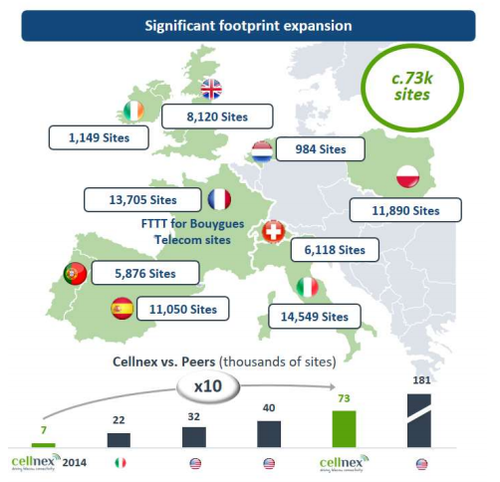 Cellnex's shareholders were able to overlook a sevenfold increase in the net loss, to 84 million ($97 million), because they have bought into the long-term strategy.

They include deep-pocketed investment funds like Edizione, GIC and the Abu Dhabi Investment Authority, all convinced infrastructure is a safe long-term bet that will pay out a steady stream of revenues and profits.

Much like other similar infrastructure firms, Cellnex makes money from renting space on its towers to the operators who actually provide a service to everyday consumers.

That is seen as a dependable source of revenues because of the growing demand for connectivity.

Telecom operators could make the same argument and yet their own valuations have plummeted in recent years on Europe's stock exchanges.

Assailed by all manner of competitive and regulatory challenges, many have been eager to offload assets and strike tenancy agreements with Cellnex.

There is a danger for Cellnex because other players, including some of the operators divesting their assets, also crave a role as regional towercos.

Vodafone is setting up a business it calls Vantage Towers. Telefónica owns a controlling stake in Telxius, another specialist. France's Orange is also spinning off its infrastructure. European tower companies appear to be springing up everywhere.

This means a growing number of infrastructure firms are competing for the same customers. Europe is not gaining service providers, either. A softening of the regulatory line on mergers and acquisitions might even whittle them down.

Densification could have the opposite effect, of course. With the rollout of 5G, some operators are investing in additional sites, including "small cells" designed to provide high-speed connectivity in specific zones. All that works to the advantage of Cellnex.

Still, its tenancy ratio  which measures the number of customers per site  rose just 3% in the last year, and Cellnex was not for disclosing the actual figure in its statement.

The good news for such an acquisitive business is that net debt has fallen by around 160 million ($188 million) since the end of last year, to less than 3.8 billion ($4.5 billion).

And Cellnex says it has access to cash and undrawn debt amounting to about 7.2 billion ($8.5 billion).

The 73,000 towers it claims in its latest statement put it far ahead of plans announced in July, when it was targeting 61,000 by 2027. But there is no indication from Cellnex that its buying spree is over.