The Great Lanyard War of MWC19

BARCELONA -- MWC19 -- A trade war between the US and China has sparked geopolitical ramifications across the world -- raising the cost of steel in the US and shaking up China's ruling party.

The global wireless industry has been entangled in the drama, too. The role of China's Huawei as an equipment supplier to telecom companies around the world is THE topic of conversation here.

Every single mention of Huawei is scrutinized. Take the trade show lanyards, for example.

Huawei is the GSMA's lanyard sponsor, and its logo adorns all of the lanyards on the official name badges that attendees are required to wear as they enter the show's cavernous conference center.

That situation is causing some concerns among some delegates attending the show.

Ericsson and Cisco are asking attendees who visit their booth to swap out their Huawei lanyard for one carrying the home team's logo. A wide range of other companies -- from SK Telecom to Verizon to Qualcomm -- have replaced the Huawei-branded ID ribbon with lanyards carrying their brands for their employees attending the show. 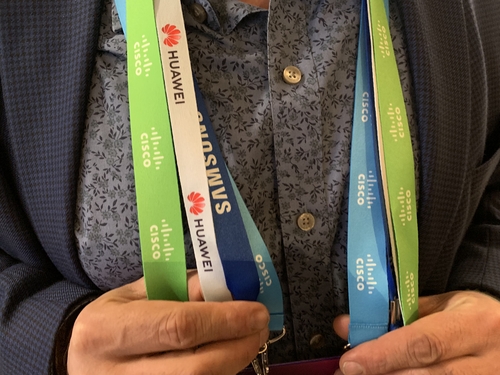 For some, the great lanyard war of MWC19 is a bit like Pokemon: You have to catch them all!

Some MWC19 attendees from the United States are too stuffy to wear a logo that represents a company that, US officials argue, is an imminent threat to the nation's cybersecurity. [Ed. note: I do wonder if they'd wear Russian hockey jerseys.]

Now listen: Lanyard sponsorships are common across a wide range of trade shows. Moreover, MWC19 exhibitors have long swapped out lanyards bearing the logos of competing companies with lanyards with their brand.

But this year, according to several MWC attendees, the situation has been exacerbated by the ongoing security concerns raging around Huawei. After all, the Chinese company has been targeted by US officials as a threat not only to US companies but also companies in other countries that interact with the US. The situation has put a number of international carriers on the defensive, and some have begun drawing up plans in case of a US ban on Huawei.

Huawei, as expected, has argued that its equipment does not pose a threat, and has repeatedly called for US officials and others to present evidence to the contrary.

As the fabric follies continue, we'll wrap up by suggesting to the GSMA another sponsorship opportunity: Offer a lanyard customization service, giving each firm a way to wear their colors at the show, for a nice, fat upcharge. In a world of overpriced food, unusable WiFi and breathtaking booth prices, the GSMA is already an expert in Chinese democracy.

Alison_ Diana 3/1/2019 | 9:42:10 AM
Double the Opp for an Entrepreneur? If someone figures out a great purpose for used lanyards and their plastic cases, they'll now have double, triple, quadruple... the resources, courtesy of the Great Lanyard War of 2018 (I would say it started then, with ZTE).
Reply | Post Message | MESSAGES LIST | START A BOARD
EDUCATIONAL RESOURCES
sponsor supplied content
Cybersecurity: Priorities & Proposals for Small ISPs
Educational Resources Archive
More Blogs from DanoVision
Roll call: Who's still going to Barcelona?

If you're still going to Barcelona this year, please let me know.

How Will 5G Play in Super Bowl

5G is going to play a big role during this year's Super Bowl. But each of the top US wireless network operators is taking a slightly different tack when it comes to the big game.

Here's Why It Might Be Time to Worry About mmWave 5G

A new year is upon us, but neither Verizon nor AT&T has shared concrete, quantifiable plans for 5G in millimeter-wave spectrum in 2020. Is this cause for concern?

Companies dealing with users' cellphone location data promise that it's kept securely and anonymously. A new report from the NYT again serves to cast serious doubts on those claims.