Huawei has been allowed off the US President's naughty step and told it can resume trading with US vendors. This time last week, the Chinese vendor was an intellectual property thief, supplier to mad mullahs in the Middle East and backdoor for Chinese premier Xi Jinping's spies. Now it's what? Wrongfully accused? A miscreant that saw the error of its ways?

"Sorry, folks, I made a mistake on Huawei." Those words have not escaped Donald Trump's lips, and contrition is not generally a part of his routine. Nor has Huawei confessed like a guilt-wracked criminal on the run, promising to be a model citizen henceforth. Unlike ZTE, which acknowledged culpability when it paid fines and sacked executives, Huawei has continued to fight charges on all fronts. 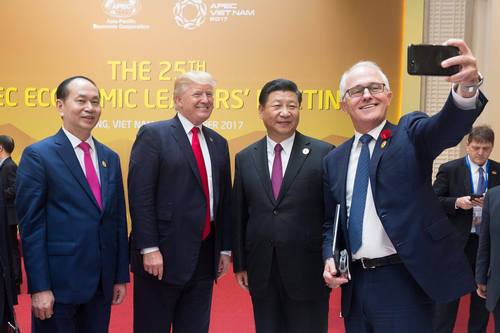 The trouble with pursuing such a determined, all-out campaign against someone is that it makes any subsequent U-turn look like a suspect maneuver. Trump is well versed here. Several months ago, he was getting ready to annihilate North Korea. Now he greets North Korean dictator Kim Jong Un like an old schoolfriend. He was even invited around to the "demilitarized zone" for drinks at the weekend. Kim Jong Un has the recognition he craves while -- according to reputable journalists -- he continues to build up North Korea's nuclear arsenal. Or is that just "fake news?"

Market watchers had long assumed Huawei was a victim of the US trade war against China. That held out the possibility of a deal that would relax sanctions against the company when Trump met Xi at the G20 in Osaka. The quid pro quo is still not clear, and the arrangement could easily collapse. But in conferring some modicum of legitimacy on Huawei, Trump has once again shown he is a man without any conviction.

He has made day-to-day business extremely difficult for his underlings, and can expect a hard time in political circles. Larry Kudlow, the White House economic advisor, has reportedly had to defend Trump against accusations of softness on national security. Senator Marco Rubio, one of Huawei's most caustic adversaries, has already slammed Trump's U-turn as a "catastrophic mistake" on Twitter. Lindsey Graham, another senator close to the president, said any sale of major technology to Huawei would be an error, according to press reports.

The practicalities are as hazy as Trump's thinking. Huawei can buy "general merchandise," Kudlow is quoted as saying, but not anything that is "national-security sensitive." What does this mean for the companies that supply components to Huawei? Is an Intel processor more sensitive than optical equipment sold by NeoPhotonics, or a bit of Android software?

Trump's horse trading is obviously seen as a positive development for the companies that count Huawei as an important customer. The likes of Broadcom and Micron can probably expect a share price boost when markets open later today, although doubts over what they can and cannot sell could be a dampener.

Nevertheless, the latest move will seem like good news for Huawei, too. It slashed its sales forecast by 30% after US officials stuck its name on the Orwellian-sounding "Entity List," preventing it from buying components made in the US. Supply chain diversification will remain a priority for the Chinese company, though. Its senior executives are not stupid and will be warier of the US and its whimsical president than ever before. The ultimate losers may be US companies, as Huawei makes sure it is no longer dependent on them.

Not all Western executives will be happy about the apparent lifting of the ban. Huawei's big rivals have diplomatically voiced concern about the US campaign, worried that China could retaliate against them. But there is not much goodwill toward Huawei. To hear it from the most bitter critics, this company got rich by reverse-engineering Western inventions and undercutting everyone on price, while financially backed by the Chinese state. Without Huawei, there would be little supplier choice, say Western service providers hooked on Huawei's products. But without Huawei, would vendor consolidation have been so rampant?

The divisions are apparent at a senior executive level. Nokia was forced to distance itself from comments made by Marcus Weldon, its own chief technology officer, after he slammed Huawei's security record during an interview with the BBC. "Some of it seems to be just sloppiness, honestly, that they haven't patched things, they haven't upgraded. But some of it is real obfuscation, where they make it look like they have the secure version when they don't," he is quoted as saying. The remarks "do not reflect the official position of Nokia," responded the Finnish vendor as it bids for lucrative 5G contracts in China.

Uncertainty will prevail. UK operators have been wondering if a government review will eventually force them to abandon Huawei (at considerable cost, they say) and switch to non-Chinese suppliers. If US companies can now transact with Huawei, will the US stop urging the UK to ban it from all 5G business? Seeking international trade deals once the UK leaves the European Union, UK politicians desperately want a rapprochement between China and the US. Their future moves hang on Trump's populist flip-flopping.

Whatever Trump and Xi cook up between them, the US president will find his U-turn even harder to execute respectably if the criminal case against Meng Wanzhou, Huawei's chief financial officer, continues to run. ZTE was banned from acquiring US components last year precisely because it had sold equipment to Iran and North Korea, in breach of US trade sanctions. Huawei has seemingly been excused even though one of its top executives is still charged with covering up business in Iran. HSBC, the bank that dobbed on Huawei to US prosecutors, is even now trying to patch up relations with the Chinese government, according to the UK's Financial Times (subscription required). It all makes what happened at the G20 seem like events from a parallel universe.

James_B_Crawshaw 7/1/2019 | 4:56:57 PM
Doublespeak The US-China trade conflict has unfortunately left the telecom industry caught in the middle but I think we should remember that there are some very fine people, on both sides.

Your suggestion that Trump and Xi should cook something up between them is a great idea. It could be televised and the proceeds used to fund world peace. Next week Kim Jong-Un bakes cupcakes with Boris Johnson.