Squashed Juniper Could Use Some Tonic

Juniper berries are best known as the key ingredient in gin, an alcoholic beverage usually combined with tonic water and a slice of lemon to make a refreshing drink. With its juicy connotations, the fruit's name was also taken by Juniper Networks, an equipment maker founded in 1996. But unlike the classic drink, the company today lacks fizz.

There is not much excitement about Juniper Networks right now. Back in the broadband bubble days of 2000, its share price soared to $218.94 as it threatened Cisco's dominance in the market for core routers. With more than 9,000 employees, it currently trades at a ninth of that figure and is down 10% in the past year. Sales to service providers, its biggest business, have fallen ten quarters in a row. Analysts fear continued decline.

No one is suddenly panicking after the Californian vendor on Thursday published a so-so set of numbers for its fiscal third quarter. Overall revenues fell 4%, to $1.13 billion, compared with the year-earlier quarter, and earnings per share of $0.48 beat Wall Street expectations of $0.46 thanks to cost controls. Sales to cloud and enterprise customers were up 7%, to nearly $681 million. Revenues from switching and security products grew 13%, to $336 million. 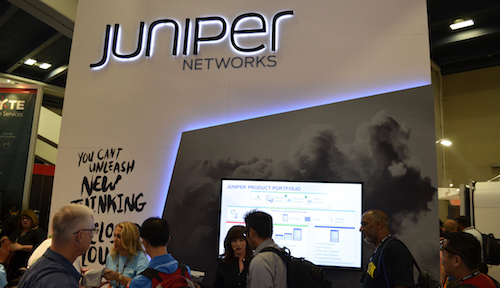 But the company's service provider business, which accounts for about 40% of sales, is in a slough. Year-on-year, revenues fell 17% in the third quarter, to $452.5 million, and they are a quarter less than Juniper made in the same quarter of 2017. Quizzed by analysts on a call about earnings, CEO Rami Rahim blamed market weakness and said rivals were also struggling. More worrying is the assertion by George Notter, an analyst at Jefferies, that Juniper is threatened by architectural and technology changes in routing networks.

Rahim's points about spending constraints among service providers seem reasonable. "They're reprioritizing investments so that they're addressing spectrum and RAN [radio access network] buildout first," he said, according to a Seeking Alpha transcript. "That means that they have less to invest in IP [Internet Protocol]." The upside, he said, is that 5G rollout will ultimately force operators to invest in their core and edge networks, where Juniper has strength. Contrail, its cloud software stack, is winning business, Rahim insisted.

Notter is unconvinced that is the whole story. "We also suspect that Juniper is losing market share among SP [service provider] customers," he writes in a research note issued after the results came out. The Jefferies base case, moreover, is that Juniper's routing business will remain "secularly challenged" as emerging technologies, based on the principle of software-defined networks, give rise to new competitors. While this risk is greater in the cloud and "hyperscale" segments, the worst-case scenario is that competition spreads into the telco space.

Rahim has downplayed this possibility. "I do not see a rapid transition from one architecture to another the way that we have seen it in the cloud space," he told analysts. "The services that they [SPs] deliver tend to be more complicated. They're much more tied to the underlying networking infrastructure." Rahim does not rule out a transition, but he thinks it is unlikely to happen as quickly as it has in the cloud market.

Unfortunately, he was not able to provide much cheer about other business activities. While enterprise sales were strong in the recent third quarter, Rahim flagged "some weakening of orders" near the end of the quarter. Following a salesforce restructuring, new hires are still not up to speed, he said. "Macroeconomic factors" are also to blame.

The shift to new 400-gigabit optical equipment could provide a future growth story in the hyperscale switching market, where Juniper's presence is weak. "We've started to deliver the systems, silicon and software needed to win hyperscale switching share during the 400-gig cycle," said Rahim. "Even a modest level of success could present material tailwind for our business in the years to come."

Yet Notter says "it feels like the 400-gig opportunity is pushing out." Three months ago, Juniper was expecting optics availability in the first half of 2020. Now it is talking about "shippable component-level products" in the second half. The company's own 400-gig equipment is not expected to be available in volume until the end of next year, months later than previously envisaged. Jefferies does not rate Juniper's chances against Arista, a younger rival in the hyperscale switching market. "We remain somewhat skeptical," says Notter.

Juniper is now guiding for a more modest return to growth next year than it previously forecast. The outlook has darkened, it says, because of continued challenges in the service provider market, the impact of its salesforce transformation and macroeconomic uncertainty. In the meantime, cost controls have fattened profit margins and share buybacks have buoyed the stock by more than 5% today to $25.75 in pre-market trading. A turnaround in the telco market is the medicine Juniper really needs.