Telefónica is set to become one of the global leaders of the telco cloud movement with the aggressive introduction of network functions virtualization (NFV) into its international operations, starting this year, the carrier's CTO has revealed.

During a closed-door presentation delivered to just a handful of telecoms industry editors at the Spanish operator's headquarters in Madrid, Telefónica SA (NYSE: TEF)'s global CTO Enrique Blanco outlined a timetable for the virtualization of much of the carrier's new network functionality and explained his reasons for being in the vanguard of a game-changing network transformation.

The operator is calling its initiative UNICA (a name it has used previously for API development work) and will begin as soon as June 2014, the CTO said.

Driving force in NFV
That Telefónica is making an early move towards functions virtualization will not come as a big surprise to those in the industry, but the pace at which it plans to introduce multiple virtual functions across its international infrastructure might raise some eyebrows, especially as the industry is still at the early proof-of-concept stage for the testing and trial of NFV. (See MWC Offers Peek at NFV Projects and NFV Group Kickstarts Proof-of-Concept Work.)

The Spanish carrier, one of the biggest and most influential network operators in the world, has long been at the forefront of the industry's NFV and software-defined networking (SDN) developments, as a founding member of the European Telecommunications Standards Institute (ETSI) NFV Industry Specification Group (ISG) and through its software-defined networking (SDN) work with technology partners such as NEC Corp. (Tokyo: 6701). (See 6 Degrees of Separation: SPs Define 'Open', NEC, Telefónica Team on SDN and Carriers Peer Into Virtual World.)

Now, though, it has decided it should wait no longer to begin a revolutionary revamp of its network, and will phase in virtualized functions starting in the middle of this year.

We have been working with the vendors to try to find ways to make the networks more efficient, and using the current technology strategies and implementations, we can achieve maybe 10-15%, but thats not enough. We have 25-30% traffic growth year-on-year, he noted, adding that a large proportion of the traffic on Telefónicas fixed networks comes from wireless devices via WiFi connections.

Pressing Ahead With NFV 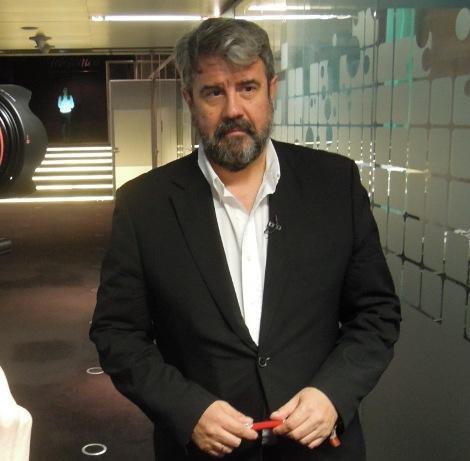 Telefónica CTO Enrique Blanco: "If we wait, nothing will happen."

Building from the datacenter
The core underlying platform for what Telefónica is trying to achieve is its datacenter facilities. We started virtualizing datacenter capacity in 2011 and this year up to 40% of our datacenter capacity will be virtualized -- maybe 80% in 2015 -- and were looking to utilize this in our networks strategy, stated the CTO. If we wait, nothing will happen, he added, prophetically.

On top of that, Telefónica will start to introduce virtualized functions, element by element, believing it can have about 30% of its new platforms in a virtualized format by 2016.

Critical to this process is openness a buy-in from vendors. This has to be as multivendor approach. We have to avoid vendor lock-in, so working with multiple suppliers with an open approach is vital. Some of the vendors might not be happy because it is cannibalizing [their traditional business], but we are working with them on that.

No hypervisor suppliers were named though, and Blanco is keeping those details close to his chest currently, saying only that Telefónica is working with a number of different providers and options and that he didn't intend to throw away his NFV capex savings on investments in highly-priced hypervisor platforms. (The inference being that those with high price tags need to rethink if they want in...)

Among the network elements to be virtualized initially are customer premises equipment (CPE) -- very simple to say, very difficult to do, says Blanco. CPE virtualization -- whereby all the services currently defined in the CPE will be defined in the network" -- is currently being trialled in Brazil with a view to introducing commercial deployments in the fourth quarter of this year.

Other elements set for the first phase are the evolved packet core (EPC) and IP Multimedia Subsystem (IMS), which is due to be the first implementation.

The operator is also already working on virtualizing its radio access network (RAN) capabilities in a cloud RAN field trial in Spain, but Blanco notes this is some way off becoming a reality and has not yet been added to the actual roadmap. Our initial focus is on the IT and signalling platforms, he noted.

The end result of functions virtualization should be greater efficiencies: The CTO believes Telefónica can reduce its operating expenditures by up to 30% through NFV and have shared resources internationally so that not every market needs to have its own full set of network elements.

In addition, NFV should make it quicker and easier to introduce and replicate new services and upgrade the network, using the datacenter-as-a-service model, and deliver an improved customer experience (due to quicker service provisioning and fewer network faults).

For example, Blanco notes that with a traditional IMS, the capabilities are provided by a single vendor with specific hardware and software. Just adding capacity can take four months, he notes. With UNICA, he sees upgrades being possible in hours, possibly even minutes, instead of months. The key to this is flexibility -- this is a different way to think, with services not being tied to physical elements.

It also makes it easier to introduce new vendors and replace those that arent meeting requirements, as a swap-out will involve only a software and not a hardware replacement process.

Cultural challenge
This will be a massive step for Telefónica, involving upheaval in the way it runs its network, delivers services and deals with suppliers. So is everyone on board with the UNICA strategy?

We need to get the trust of all the people in Telefónica in all the different countries -- we need to set SLAs and then show we can achieve them. We need to deliver the quality that the people in every country need to run their businesses. We have to deliver to five nines. If we cant do that then we are in trouble, said Blanco. All the technology people know it is going to happen, but it will take time. You cant be against it it is a change of culture and management.

His colleague Cayetano Carbajo, director of planning and technology for transport, core, platforms and mobile devices at Telefónica, added: The organizational and cultural change is harder than the technological change.

And given that the technological change is going to be a very challenging process, Blanco and Carbajo have a massive task on their hands to introduce such a revolutionary change to a Tier 1 telco.

But the process has already begun, and the Telefónica team is using demos at the Mobile World Congress event to help convince the world (including its own staff) that the virtualization of telecom network functions is the way forward and that this radical process needs to start right now.