"One of our customer CIOs says it's a Baskin-Robbins out there for SD-WAN," Victor said here during a presentation at the MEF 19 conference Tuesday.

Indeed, the problem for enterprises and service providers is worse than it is for an ice cream lover struggling to decide between Baskin-Robbins' Mango Tango, Hokey Pokey and 29 other flavors.

"Instead of 31 flavors, it's 80," Victor said. That's 80 different SD-WAN vendors, making it impossible for enterprises and the operators who serve them to keep up on skills and management. (Editor's note: We've seen other estimates of the number of SD-WAN vendors, ranging from the 50s to 70s. Regardless, that's a lot of choices.)

Customers come to Comcast after making their own decisions to deploy SD-WAN, and Comcast supports only a couple of SD-WAN platforms. It's difficult for Comcast to support each SD-WAN platform as a one-off, so Comcast looks to MEF to provide standardization, Victor said.

And Comcast looks to MEF to deepen its collaboration with industry user groups, such as the enterprise-focused Open Networking User Group (ONUG), to connect enterprises and other end customers to the broader service provider ecosystem and extend the scope of SD-WAN reach, Victor said. 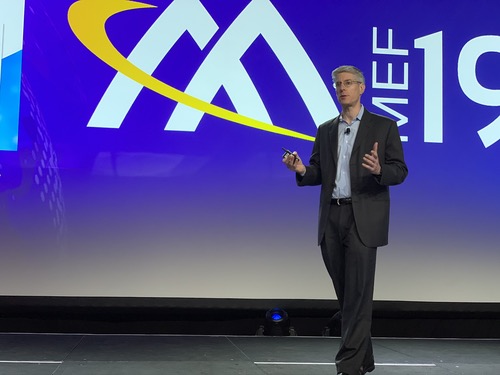 He looks like he would like some ice cream.
Now entering its sixth year, the 2020 Vision Executive Summit is an exclusive meeting of global service provider executives focused on navigating the disruptive forces at work in telecom today. Join us in Vienna on December 3-5 to meet with fellow senior communications executives as we define the future of next-gen communications and how to make it profitable.

Why SD-WAN? SD-WAN is in demand because it delivers benefits including quality of service (QoS), network segmentation and failover, prioritizing important traffic, centralized visibility and management, and, finally, cost savings, Victor said.

The most important SD-WAN benefits are QoS and network segmentation, Victor said. Centralized visibility and management is also important, to help solve the labor challenge. Enterprises don't have networking skills at the edge -- they need to do more centrally, he added.

Those elements are more important than security and cost of service, Victor said. Customers aren't necessarily looking to SD-WAN to provide security; they're willing to live with legacy security now and upgrade later, he said. But as the network becomes more important, the need for security becomes greater.

For cost savings, customers say they're not spending less, but they're doing more. The reduced cost of SD-WAN compared with legacy connectivity funds the transition to move off legacy networks, said the Comcast man.

Comcast's customers rate their transition to SD-WAN as a 6.5 on a 10 scale. "Not a bad rating," Victor said. Factors that contribute to success include taking a network inventory in advance -- knowing what's on the WAN before making the transition. Enterprises can also make success more likely by creating a golden, master configuration for the network, testing that configuration in advance, then locking the configuration down before deployment to get it right and scaling rollout slowly and methodically.

Challenges to making the transition include the multiplicity of SD-WAN varieties -- the Baskin-Robbins problem. Enterprises have difficulty obtaining support, as their current IT staff lacks SD-WAN skills. Additionally, enterprises face long periods of provisioning, and difficulties maintaining quality of service for voice when traffic is mixed, Victor said.

Once the SD-WAN service is up, customer satisfaction improves to 8.5 out of 10. "Almost everyone is pleased," Victor said. Customers are pleased by improved analytics and reporting, and increased bandwidth. These customers expected these results based on proof-of-concept, and they were not disappointed.

But SD-WAN has room for improvement. The technology needs better troubleshooting capabilities, operations, and tools to get to root cause of problems and address them faster. Problems should be self-reporting and self-healing. SD-WAN needs greater simplicity. And customers want to move away from MPLS and other legacy technologies faster, Victor said.

Reporting should be simplified, particularly when things are going well. "Maybe just a smiley face at the end of the day instead of a long report," VIctor said.

Additionally, SD-WAN needs improved support for IoT and mobile devices. "SD-WAN becomes the network operating system for all devices, and all devices are connected," Victor said.

And to solve decision paralysis at Baskin-Robbins: Get Rocky Road ice cream.