Apcela, an application delivery company, has launched AppMon, a software-defined monitoring and network telemetry tool which tracks network and application performance for enterprises, and also integrates with Cisco SD-WAN.

AppMon is integrated with Apcela's Enhanced Analytics Platform (EAP) -- which launched in April -- to provide enterprises with application and network visibility across public and private clouds in hybrid networks. IT teams can utilize the tool to baseline application and network performance -- AppMon monitors both underlay and overlay networks as well as application performance to pinpoint whether issues with applications are a result of those applications or the network. (See Apcela Debuts AppMon, an Enterprise-Grade Software-Defined Monitoring Solution .)

"AppMon is a synthetic monitoring tool that allows us to monitor the underlay networks regardless of what those are -- MPLS, Ethernet private line, dedicated Internet access, broadband, etc.," says Apcela CEO Mark Casey. "We can monitor through those networks things like latency, jitter and packet-loss. It allows us to segment the underlaying network."

Casey explains that AppMon automates the process of identifying enterprise application issues and "segment and solve that problem much faster, to do it with data versus a network engineer or technician logging in to switches and routers and trying to manually coordinate where the problem is. When we take that data and put it on the EAP platform, now we've got the data in one place and we can correlate it."

For example, the AppMon tool might correlate a high-latency issue in the overlay network with a Border Gateway Protocol (BGP) routing issue in the underlay network, an issue which Casey says could take a networking team hours to uncover manually. In addition, AppMon can synthetically -- or proactively -- monitor cloud applications, such as Salesforce or Office 365. Speeding the time it takes to detect network and application performance issues is key to reducing costs for enterprises.

ESG Senior Analyst Bob Laliberte says the more visibility organizations can gather into their on-premises and cloud environments and across carrier networks, the better they can "check the performance and isolate faults and do that reactively and proactively."

According to a 2018 IT Spending Intentions Research Report by Enterprise Strategy Group, 81% of respondent have two or more public cloud infrastructure providers. As enterprises increasingly utilize multiple clouds and deploy SD-WAN to connect to those clouds, Laliberte says it's key for IT teams to leverage software that assists them in managing these sophisticated environments, and improving application performance and customer experience. 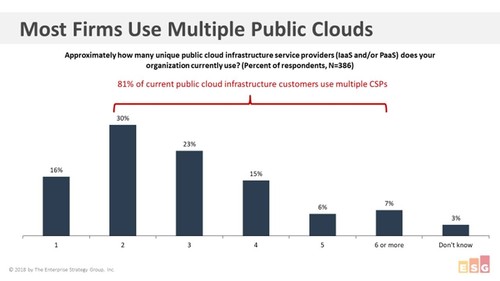 "That's what [Apcela] is looking to solve -- 'how do we provide the visibility and network/application performance as you move to that hybrid cloud?'" adds Laliberte. "The ideal solution would be to deploy technology like this prior to moving it to the cloud so you could benchmark it and then moving it to the cloud and checking it against that benchmark it when you owned it. Or if you're going to one cloud versus another, benchmarking that performance as well."

Data collected from AppMon is directed into the Enhanced Analytics Platform, which fully integrates with Cisco SD-WAN API and can also be utilized with other SD-WANs. Lloyd Noronha, head of SD-WAN marketing for Cisco Systems Inc. (Nasdaq: CSCO), says Apcela has access to Cisco's vAnalytics -- which provides data and analysis for the WAN -- and vManage dashboards to "correlate any performance issues that arise - they plug into our infrastructure, our API, read all the data and store what's relevant." (See Cisco Takes Network Intuitive Venture to the WAN .)

Apcela initially targeted large, global companies in capital markets, says CEO Mark Casey, but in the last two to three years has begun working with enterprises in other verticals such as biopharmaceutical, global engineering, manufacturing and healthcare. The company has over 100 customers in 185 markets across 41 countries.

Apcela, headquartered in Virginia, was founded in 2005 as CSX Fiber Networks and launched its AppHUB platform in 2012, which is a global application delivery platform for hybrid premises-based and cloud IT environments. In January 2018, Apcela announced additional, undisclosed funding from existing investor Claritas Capital.