Borrowing a page from a playbook originally developed for its stable of Fios services, Verizon has introduced a handful of "Mix & Match" plans for customers on unlimited 5G plans that bundle in streaming services from Disney as well as Apple Music.

On the top end, a new $55 per line/month "Get More Unlimited" plan features both 5G and 4G and bundles in Disney+, ESPN+, the ad-supported subscription (SVoD) tier of Hulu, and Apple Music for no added cost (customers can upgrade to the ad-free version of Hulu's SVoD service for an additional $6 per month).

Among Mix & Match plan on the lower end of the spectrum, Verizon's "Start Unlimited" 4G plan starts at $35 per line per month, includes six months of Disney+ and Apple Music, plus the option to add 5G for an additional $10 per month. A 4G-only "Just Kids" plan features unlimited data (at 5 Mbit/s) and unlimited talk and text to 20 contacts, but does not bundle in any streaming services.

Verizon is launching the new Mix & Match unlimited wireless plans on August 20. Here's how they stack up: 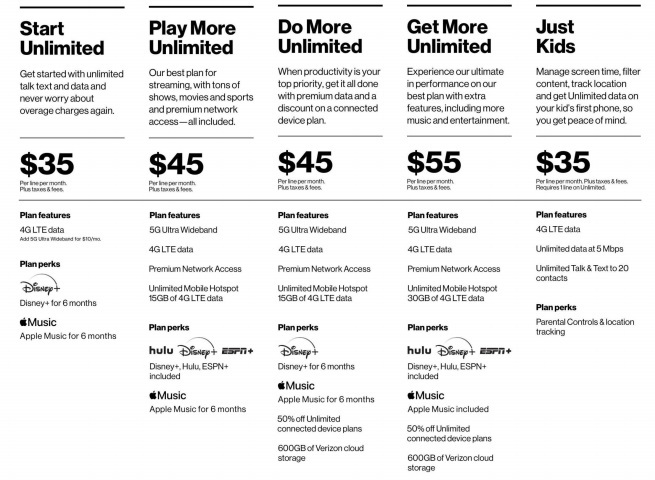 *Prices per month per line with 4 lines. Plus taxes and fees. When enrolled in AutoPay.
Click here for a larger version of this chart.

A new twist to Verizon's 'Mix & Match' strategy
Verizon's new Mix & Match plans for unlimited wireless/mobile customers follow a similar bundling strategy the company has taken with Fios. Those Fios-focused Mix & Match plans lead with Verizon's fiber-to-the-home Internet service (up to 1 Gbit/s), with options to add a Fios TV package (starting at $50 per month) or to tack on YouTube TV for an additional $64.99 per month.

The addition of the Disney streaming bundle to certain Mix & Match unlimited mobile plans follows a pact between Disney and Verizon announced last year that provided a free year of Disney+ to all new and existing Verizon 4G and 5G customers on unlimited wireless tiers and to new Verizon Fios Home Internet and 5G Home Internet customers.

Verizon's new streaming-focused, unlimited mobile Mix & Match combos enter the picture amid competitive wireless packages from AT&T and T-Mobile that also emphasize OTT video services. AT&T, for example, is marketing an unlimited plan with 5G that bundles in HBO Max, the super-sized SVoD service that launched nationally on May 27. Meanwhile, T-Mobile has been focusing on plans that subsidize a year of Netflix or Quibi, the new premium short-form video service that launched April 6). T-Mobile is also expected to launch a mix of new mobile promotions that tie in the next generation of T-Mobile's TVision pay-TV service.

The new plans also signal a significant change in Verizon's broader pricing strategy for 5G, as it appears that the company will sidestep charging extra for 5G for the vast majority of its new Mix & Match unlimited wireless plans. For more on that development, please see this story: Verizon kills plan to charge $10/month for 5G.