US pay-TV gains 31K subs in Q3, thanks to OTT rebound

The US pay-TV industry took it on the chin again in Q3 2020, but the resulting blow was softened a bit by a solid rebound by YouTube TV, Sling TV, Hulu, fuboTV and other virtual multichannel video programming distributors (vMVPDs).

Traditional US pay-TV providers lost about 1.45 million subscribers in Q3 2020, marking the ninth-consecutive quarter with losses of 1 million-plus subscribers, according to MoffettNathanson's latest "Cord-Cutting Monitor" report. Thanks to the addition of an estimated 1.48 million vMVPD subs, though, the aggregate US pay-TV market actually added 31,000 subs in the period, the report found. 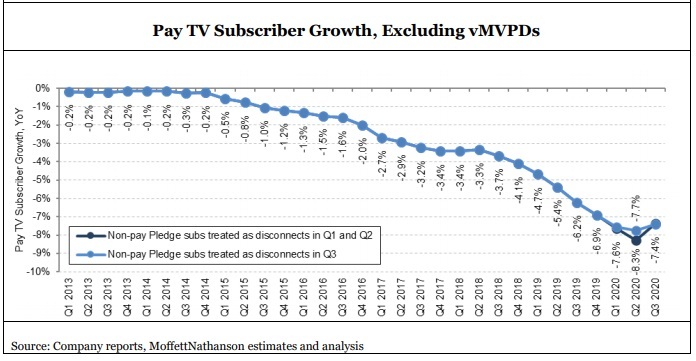 Still, the decline among telcos, satellite TV providers and cable operators in Q3 2020 whittled residential penetration of traditional pay-TV down to about 61% of occupied households.

"Remarkably, that dismal result, which brings the current YoY rate of decline for traditional video subscriptions to a once unthinkable -7.4%, has been broadly viewed as a win," Craig Moffett, analyst with MoffettNathanson, explained in the report.

That's partly because satellite TV subscriber losses at both Dish Network and AT&T-owned DirecTV moderated in the quarter. Dish, for example, is benefiting from a focus on rural markets where cable and OTT services aren't yet an option. However, that benefit is poised to be nullified amid various government funding efforts designed to bring broadband to unserved and underserved areas.

With virtual MVPDs factored in, the overall penetration rate for pay-TV fell by about 4.6% in Q3, an improvement of 70 basis points from a quarter ago. 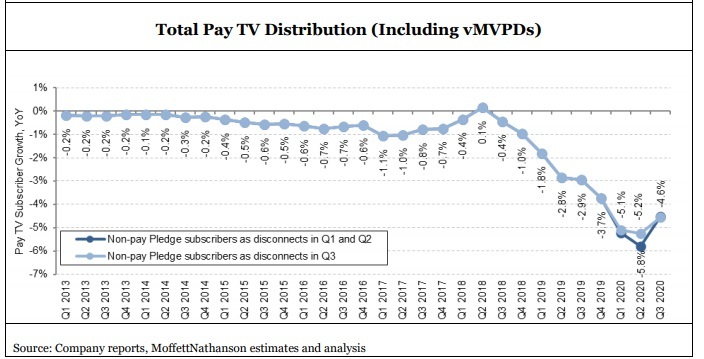 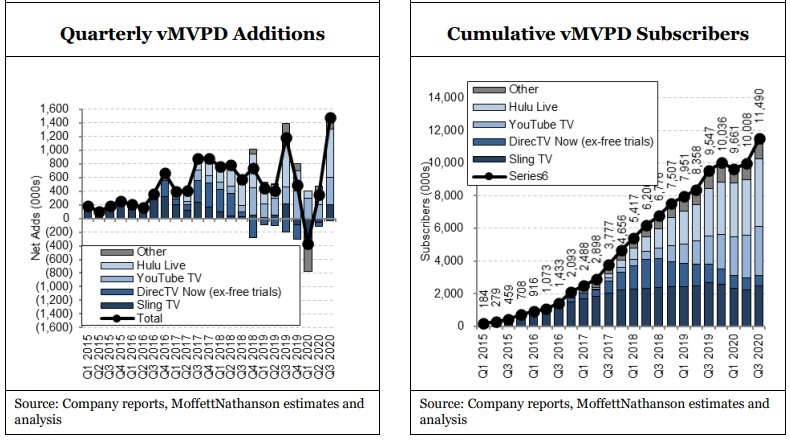 The Q3 spike in the OTT-TV sector happened despite recent rate increases at services such as fuboTV and YouTube TV. Hulu's live TV service will be raised by $10 per month starting December 18.

Moffett attributed a big part of the spike in the vMVPD market and moderating losses among traditional pay-TV providers to the return of televised live sports.

While it appears that the vMVPD market is now back on firmer growth footing following a weak first half of the year, Moffett also wonders if this is merely a mirage. Are OTT-TV providers now increasingly exposed to the same kind of seasonality trends that more traditional providers see year after year?

This year's vMVPD sub results are "a sign that subscribers are turning subscriptions off and back on according to the rhythms of their favorite sport(s) seasons, with the third quarter enjoying an unusually large boost as almost all sports came back at once," Moffett explained. "In other words it's very likely that what we are witnessing is seasonal churn."

He acknowledged that sports-related seasonal churn for vMVPDs is just a hypothesis, as more time and analysis will be the truthteller. But, if it is indeed the case, it's a potentially troubling churn trend for no-contract vMVPDs that allow subs to turn services on and off at will.

It's not clear if the overall improvements seen by the entire pay-TV industry in Q3  driven by televised sports and a hyper news cycle  are a blip or the sign of a longer trend. Moffett seems to be betting that it's a blip, noting that the shift to subscription and free, ad-supported VoD streaming services  categories that are powering the cord-cutting trend  aren't slowing down.

"Remember, this was a quarter that saw the return of every major professional sports league and college football all at once, not to mention the run-up to an election that kept even non-news junkies tied to their TVs," he explained. "Against that backdrop, it is not surprising that the rate of decline slowed. That set-up won't be repeated."

He also isn't sure if pay-TV is finally nearing a predicted "sports floor" as traditional pay-TV distribution falls to just under 61%. The wrinkle is that this originally predicted floor of 60% penetration did not factor in vMVPDs that offer a wide mix of sports programming and are then possibly exposed to even heavier dose of seasonal churn.

"There are now well over eleven million vMVPD subscribers, suggesting that ecosystem as a whole is still some 11 million households above our postulated 'floor,'" Moffett points out.