TVision is a slick platform, but content mix will need to evolve

TVision, T-Mobile's revamped streaming service, is a slick showcase of what a service provider can do with the Android TV Operator Tier. But TVision's programming mix will certainly need to evolve and expand to attract large audiences ready to give traditional pay-TV the heave-ho or leave their existing OTT-TV service in the dust.

After kicking the tires on TVision for a few days ahead of its launch on November 1 (initially to T-Mobile's postpaid mobile base), the good news is that T-Mobile's new service provides the company with a solid foundation to build off of for years to come. But the bad news is that the service's lack of some national cable networks, integrated access to CBS local broadcasts and access to HBO/HBO Max will still force some customers to kluge together something that fulfills all of their TV needs  either by purchasing a subscription VoD service like CBS All Access (soon to become Paramount+) separately or use a digital antenna to get all their live local channels. 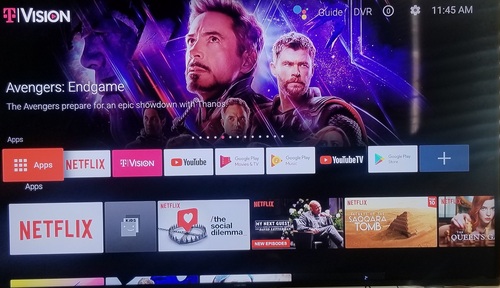 The home screen for the TVision Hub provides central access to multiple OTT apps and services but is optimized to showcase T-Mobile's new pay-TV service.

But that's a challenge faced by all pay-TV services, whether they be traditional cable, telco or satellite providers or one of the new breed of virtual multichannel video programming distributors (vMVPDs) that rely on Internet delivery. To keep the bundle skinny and affordable, they all must compromise and fit together puzzle pieces that can appeal to enough subscribers to make the business sustainable.

And the latest iteration of TVision is a decent start. The entertainment-focused TVision Vibe service, with 30-plus channels, starts at just $10 per month, with access to a 100-hour DVR costing an extra $5 per month. TVision Live, which adds more sports and news to the mix, starts at $40 per month.

While TVision's programming packages will no doubt change and expand in the months to come, the platform itself is solid.

I tested the service on the T-Mobile-supplied TVision "Hub," a small Android TV-powered dongle, and as an app on an iPad and my Android smartphone. The mobile apps shared much of the look and feel of the TV implementation and were plenty easy to navigate, but TVision's Android TV implementation is what really shines. 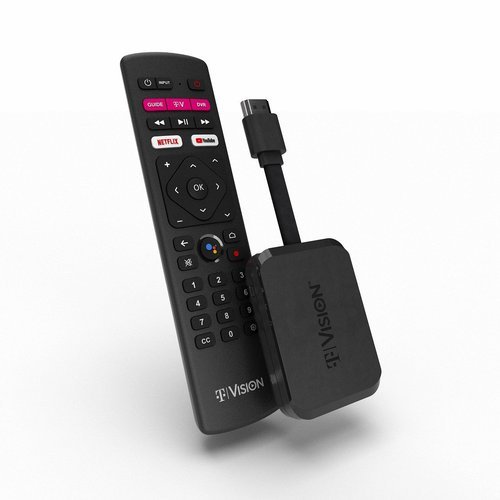 The Android TV-powered TVision Hub is designed to work well with T-Mobile's new pay-TV service, but, at just $50, would do well as a standalone streaming device even without the TVision service.

Setting up the TVision Hub was a breeze  no more difficult than any other streamers from Roku or Amazon (Fire TV) I've set up in recent years. After plugging it into the HDMI port of the TV and powering it up through an open TV USB port, it took less than ten minutes to connect the Hub to my home Wi-Fi network, enter my trial credentials and have the service up and running.

Because the TVision Hub uses the Android TV Operator Tier, the device is optimized for the TVision service while still providing access to Netflix, Disney+, Amazon Prime Video and other OTT apps via Google Play. The Hub's search engine did a fine job of locating titles across TVision and the third-party apps that I installed on the device. 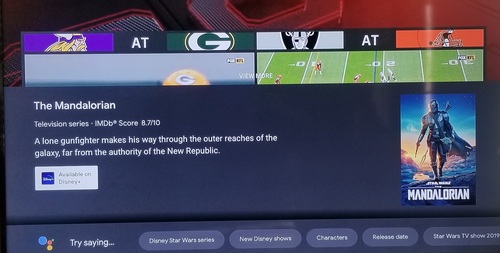 The TVision Hub's navigation and search platform is optimized for T-Mobile's pay-TV service, but does cross-search for content on installed apps from third-party apps such as Disney+.

Although it's a streaming device at heart, the TVision Hub is also designed to boot up to T-Mobile's pay-TV service. When I powered the Hub back up after a previous viewing session, it automatically started up a stream of the last channel I watched  just like a regular, operator-supplied set-top box  rather than forcing me to start over at the home screen and then push a bunch of buttons to return to the TVision environment and start watching TV.

And while it's good for any new OTT-TV provider to avoid many of the trappings of legacy set-top boxes, I think T-Mobile's decision to support a traditional grid guide will offer some comfort and familiarity to consumers who might need some extra time figuring out how to use some of TVision's more advanced navigation features. 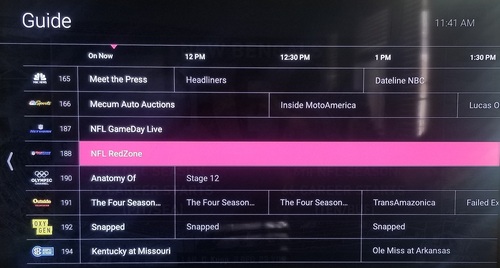 TVision offers a lot of new bells and whistles with respect to navigation while still providing access to an old school grid guide.

But those more advanced features, including the integrated voice remote, will help consumers more quickly navigate live and VoD fare and find what they're looking for. TVision also includes a sizable array of graphical ribbons that run across the screen horizontally and distill content into categories such as popular movies and TV shows, live sports, news and DVR recordings. The "Recently Watched" ribbon on the Hub is configured to pull up the last 15 channels viewed and, as a nice touch, features small, thumbnail-sized live look-ins of those recently viewed channels.

TVision on the iPad 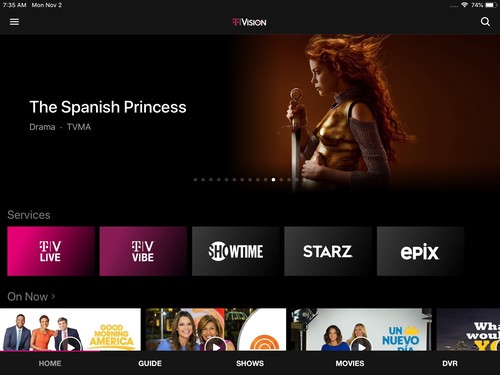 The TVision app for mobile devices shares much of the look and feel of the service's TV experience.

I also liked the overall performance of TVision Hub, as it supported snappy channel changes and allowed me to easily cruise between the TVision service and third-party apps. It took just moments for the system to move me from the TVision service and load and start an app such as Netflix or YouTube. Those super-fast app loads compare very favorably with what I've experienced with Comcast's X1 platform. While X1 has done a very good job integrating third-party apps with its search and navigation functions, spooling up an app like YouTube or Netflix tends to be a laborious, time-consuming process for an X1 box.

The TVision Hub remote is responsive and the shortcut buttons to TVision, Netflix and YouTube are a nice touch. One thing I'd put on my wish list is a premium backlit remote, so I wouldn't have to fumble around to find the right buttons when using it in a dark or dimly lit room (new X1 remotes have a clear advantage here). But that minor objection aside, the TVision Hub's $50 price is a downright bargain.

But, like any OTT service, TVision is also limited by the quality of the home's Internet connection. The service's streaming performance was steady for the most part during my time with it, but TVision did buffer when I happened to be watching it in the middle of a massive game download to a PC on the same home Wi-Fi network. Encountering a spinning ball in magenta is just as annoying as it is in any other color.

Will T-Mobile succeed with TVision?

I don't expect TVision to set the world on fire right away. But I do believe that T-Mobile has developed the key ingredients to at least hold its own in the segment of the market it's initially targeting.

T-Mobile certainly has its work cut out, though, given the base fact that it's late to the pay-TV game (its acquisition of Layer3 TV and the T-Mobile's initial expensive, fat-bundle TVision Home service notwithstanding) and is emerging on the scene just as the whole pay-TV sector is struggling.

TVision's initial blend of packaging and pricing will resonate with a subset of the market and will probably entice lots of T-Mobile customers to give it a try. However, T-Mobile will no doubt need to evolve the service and provide much more programming and packaging optionality if it's to become a relevant pay-TV player, let alone a long-term success.

Yet TVision has quite a few things going for it that not all OTT-TV services have. For starters, it's got T-Mobile's marketing muscle and panache, plus a massive mobile subscriber base on which to focus.

That's great, but pay-TV is a tough, low-margin business in decline that's beholden to programming contracts that place limits on how services can be bundled and priced. Like all pay-TV providers, T-Mobile, despite its marketing bluster about taking on the "Cableopoly," is not magically immune to these limitations.

What T-Mobile will have is a wireless home broadband service it will use (eventually) to help drive bundles that feature TVision. Bundling home broadband with TVision is not T-Mobile's focus early on, but it will likely play a big role as the provider continues to push ahead with the deployment of 5G and the use of 5G in its fixed wireless broadband service.

Business and content challenges aside, my limited time with TVision showed that T-Mobile has established a solid technical foundation for pay-TV with the potential to make some serious noise so long as it continues to evolve how the service is priced and packaged.