Comcast holds a 9.3% stake in FuboTV, the self-proclaimed "sports-first" virtual multichannel video programming distributor (vMVPD), according to a filing with the US Securities and Exchange Commission (SEC).

According to the disclosure made on February 11, a handful of Comcast-related entities, including Comcast Bidco Holdings, Sky UK Limited and Sky Ventures Limited, hold about 6.95 million shares of FuboTV. Disney and ViacomCBS also hold minority stakes in the vMVPD. AMC Networks recently disclosed that it no longer holds a stake in FuboTV. 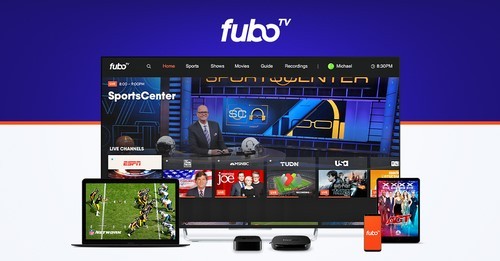 FuboTV, an OTT-TV service with about 545,000 subscribers, has recently acquired two companies that will help it to enter the online sports wagering business.
(Image source: FuboTV)

Comcast has been asked to comment on the strategic reasoning behind its stake in FuboTV.

Update: Sky made an investment in FuboTV a couple of years prior to Comcast's 2018 acquisition of Sky, according to Comcast.

Richard Greenfield, an analyst at LightShed Partners, who is not a big fan of a "broken" vMVPD business model that has succumbed to the same issues plaguing traditional pay-TV providers, pointed out on Twitter that Comcast, which owns NBCUniversal, first acquired a much smaller piece of FuboTV years ago in return for carriage. 21st Century Fox and ViacomCBS have also acquired stakes in FuboTV linked to network carriage deals, Multichannel News reports.

At the same time, this latest filing enters the picture as streaming becomes increasingly important to Comcast and NBCU.

Comcast has also hinted at its interest in extending the reach of Flex, its video streaming platform for broadband-only customers, outside the company's cable service footprint. In addition, Comcast has confirmed that it's interested in expanding its X1 software stack to smart TVs on a global basis, with reports that Comcast and Walmart are in talks to develop, distribute and promote smart TVs equipped with software and apps developed by Comcast.

Comcast's NBCU still owns about a third of Hulu, but could sell that stake as early as 2024 as part of a deal struck in 2019 that gave Disney full operational control of Hulu.

From a broader standpoint, Comcast has identified content aggregation and the scaling of its platforms to succeed in streaming among the three "core tenets" of the company's strategy. Providing customers with fast and reliable broadband is the other.

It's not yet clear if Comcast's stake in FuboTV is an indicator that the operator intends to integrate the FuboTV service onto its Flex and/or X1 platforms. Last summer, Comcast integrated a range of pay-TV packages from Sling TV, including Sling's primary Orange and Blue pay-TV packages, on Flex.

Comcast's ownership disclosure also emerges as FuboTV looks to differentiate in a crowded vMVPD market that includes several players, including FuboTV, that have been forced to raise rates amid expanding channel lineups and rising programming costs.

While pay-TV packages are FuboTV's primary business, the service is making plans to enter the online sports wagering mix. FuboTV, which recently acquired Balto Sports and Vigtory to back that effort, intends to introduce a free-to-play offering and later expand into real money wagering in "regulated markets."

Like what we have to say? Click here to sign up to our daily newsletter
COMMENTS
Newest First | Oldest First | Threaded View
Add Comment
Be the first to post a comment regarding this story.
EDUCATIONAL RESOURCES
sponsor supplied content
Cox Business Account Executive
Welcome to the Winners Circle
Join the team at Cox Business!
Educational Resources Archive
More Blogs from The Bauminator
Kimberly Maki lends SCTE a helping hand