Siden, a startup backed by Columbia Capital, has obtained T-Mobile's permission to test its LTE Broadcast service in Washington, DC, in a chunk of T-Mobile's spectrum. The companies did not immediately respond to questions about the test, but after this article was published a Siden representative confirmed the company is interested in evaluating its offering in a live setting in the US market."

In a request filed with the FCC, Siden said the test will allow it to "gain a better understanding of new, innovative services using typically underused LTE broadcast capabilities to help close the data gap between consumer demand and wireless network capacity."

Continued Siden: "Consumers are watching more online video content than ever before. Wireless providers soon will struggle to supply enough wireless network capacity to meet that demand, leading to a 'data gap.' Siden seeks to address this data gap by providing an innovative alternative to fiber home broadband."

According to its website, Siden offers technology  including a set-top box that plugs into a customer's TV  to stream unlimited video across 4G and 5G networks. The five-year-old company's leadership team includes executives from the likes of QuickPlay (a company formerly owned by AT&T that now forms the basis of a new company called Firstlight Media), LightSquared (now Ligado) and Qualcomm. 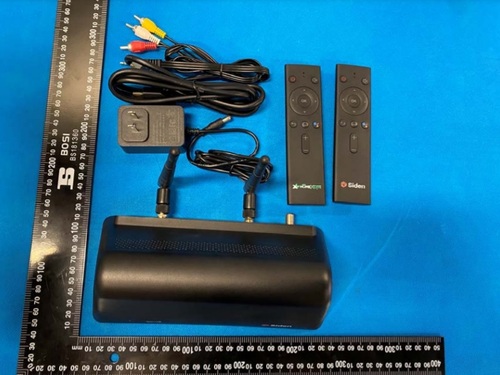 Siden's filings with the FCC show off its set-top box, remote and charger.
(Source: Siden/FCC)

Siden's work with T-Mobile is noteworthy considering the operator's stumbles in getting its TVision streaming video service off the ground. For example, Light Reading reported earlier this month that Dwayne Benefield, the exec who helped pull together the programming and packaging for T-Mobile's new TVision streaming service, left the company to take a leading role at Canada's Telus.

Further, T-Mobile is widely expected to expand its Home Internet service working on its 5G network in the coming months, and will likely couple that service with a streaming video product.

Such efforts would seem to lend themselves to the kinds of streaming technologies that Siden plans to test over T-Mobile's PCS spectrum holdings. However, neither company indicated they have a business agreement beyond the tests.

However, after this story was published a Siden representative said that the company is not involved with streaming TV services like TVision. The representative also said that Siden is not specifically focused on LTE Broadcast but a broader technology that would impact the fixed wireless Internet industry.

Siden isn't the first company to show interest in the LTE Broadcast standard, which is based on Evolved Multicast Broadcast Multimedia Service (eMBMS) technology and allows operators to efficiently broadcast a single video stream to multiple users. Proponents have argued that LTE Broadcast services could support applications ranging from airport announcements to live concerts, and operators including Verizon and AT&T dabbled in the technology. However, it never gained traction amid consumers' overall shift from linear, one-to-many video entertainment to on-demand, one-to-one entertainment like Netflix and YouTube.