The last vestiges of what was Layer3 TV will soon be swept away.

T-Mobile will shut down TVision Home, the big bundle pay-TV service central to its 2018 acquisiton of Denver-based Layer3 TV, at 3 a.m. ET on December 30, 2020, according to this FAQ. 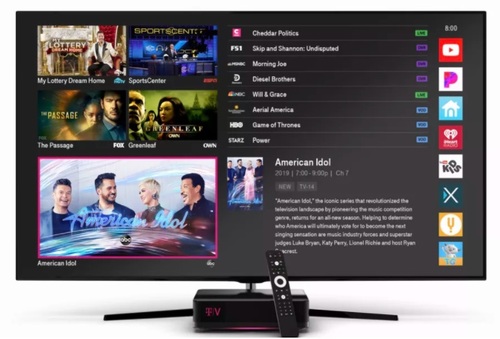 TVision Home is IP-based, but relies on a more traditional DVRs and set-top box client devices.

Word of that shutdown comes just weeks after T-Mobile launched TVision, a revamped streaming TV service that features smaller channel bundles and a cloud DVR. The new TVision runs as an app on various retail streaming platforms along with an Android TV-powered dongle optimized for TVision that sells for $50 and supports a multitude of apps and services from Google Play. The entertainment-focused TVision Vibe package starts at $10 per month and TVision Live, which adds sports and news to the mix, starts at $40 per month.

By comparison, TVision Home  the former Layer3 TV service  is a big bundle pay-TV service starting at $90 per month that is powered by more traditional IP-based set-top DVRs and client devices that have been integrated with a smattering of streaming apps, including Netflix, Xumo and CuriosityStream.

Layer3 TV was also limited to a handful of US markets, including Dallas-Fort Worth; Los Angeles; New York City; Philadelphia; San Francisco; Washington, DC; and Longmont, Colorado. Early on, the new TVision is being offered nationally to T-Mobile postpaid mobile subs and (soon) to legacy Sprint subs. T-Mobile has plans to extend it to prepaid mobile customers and as a standalone service sometime in 2021. T-Mobile is also expected to promote the new TVision in tandem with its home fixed wireless broadband service.

T-Mobile shelled out more than $325 million for Layer3 TV and has effectively written-down the acquisition. Multiple industry sources familiar with the situation said it did not take long for it to dawn on T-Mobile that the platform it had acquired would not scale, hence the decision for the complete revamp.

Because very little of the original Layer3 TV seems to have been carried forward, it's not clear what T-Mobile really got out of the deal other than to establish its formal entry into the pay-TV market, obtain some important know-how about the pay-TV business and programming contracts and whatever other takeaways that could be applied to what became the new, revamped form of TVision.

Per T-Mobile's spin in the FAQ, TVision Home was merely "the start of our mission to make TV better for everyone and remove customer pain points," holding that TVision Live "will give customers the best possible choice in TV."

TVision Home services will auto-destruct on December 30. But, to help make amends, eligible customers are in line to get a free taste of the new TVision through the middle of next year.

The new TVision has not been without its problems. Programmers such as Discovery and NBCUniversal have complained that the current packages violate the terms of their contracts, something that T-Mobile has denied. At last check, T-Mobile has not made any changes to its packaging and pricing for the new TVision service.