The erosion of the US pay-TV market continued in the second quarter as service providers (traditional and OTT alike) combined to lose a total of 1.55 million subs in the period, according to the latest estimates from MoffettNathanson.

While the overall losses were not as steep as feared during a quarter that was pressured by the pandemic, price hikes and the absence of televised live sports, a top industry analyst warns of a looming, more damaging "second wave" powered by a significant "content redirection" by media giants to subscription and ad-supported streaming services.

"As more and more people leave the traditional ecosystem for direct-to-consumer [DTC] substitutes, programmers are increasingly moving their best content to their DTC platforms," Craig Moffett, analyst with MoffettNathanson, explained in his latest quarterly Cord-Cutting Monitor report (registration required). "Media companies have no choice but to target this huge market with DTC SVOD and AVOD options."

This content redirection trend is hiding out in the open  Disney with Disney+, NBCUniversal with Peacock, WarnerMedia with HBO Max, along with ViacomCBS's coming "super" streaming service that will succeed CBS All Access, and the rapid approach of a new, aggregated streaming service from Discovery Communications.

"Not only does content redirection make the SVOD and AVOD alternatives better and better, it also impoverishes the Pay TV ecosystem, strip-mining it of all that is worthy," Moffett wrote. "It is this second cycle that is likely to be the straw that breaks the camel's back."

The camel's back is weakening
The traditional US pay-TV sector (not including virtual multichannel video programming distributors, or vMVPDs) lost 1.9 million subs in Q2, versus a year-ago subtraction of 1.47 million, according to Moffett's estimates. 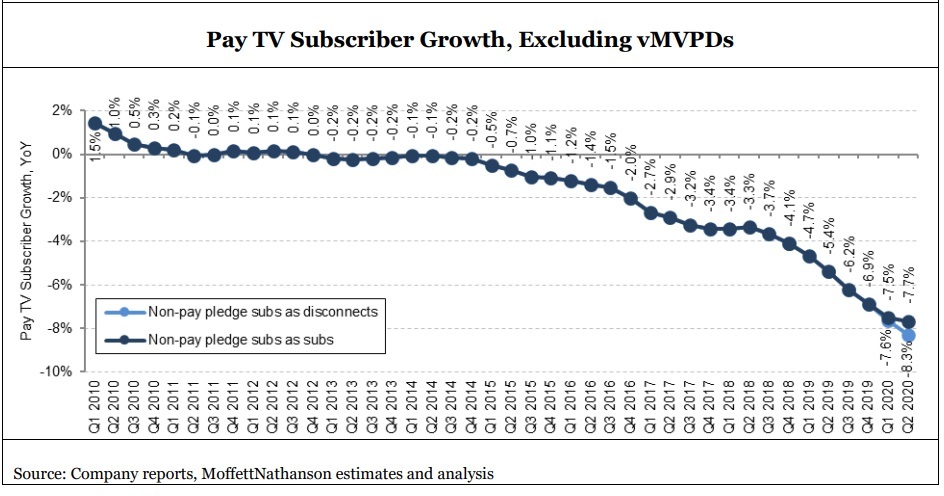 The penetration of traditional pay-TV providers dropped to about 61% of occupied households, down to circa 1995 levels when satellite TV first started to deliver service to rural America, Moffett points out.

OTT-TV's promise remains unfulfilled
Meanwhile, the vMVPD market, marked by recent price hikes from some providers, is not picking up the slack.

With vMVPDs included, US pay-TV shed 1.55 million subs, according to the analyst's estimates. 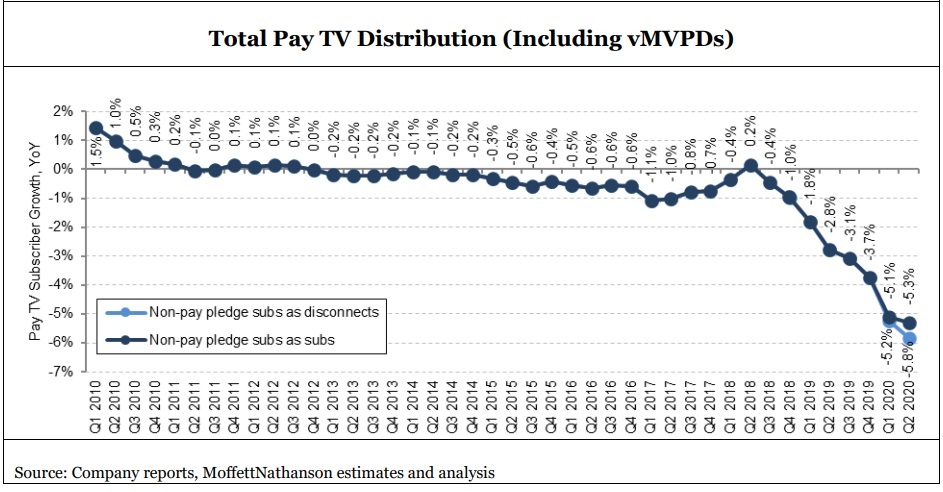 "There is simply no way to pretend that vMVPDs will be the salvation for the industry that so many had hoped just a few years ago," Moffett explained. "SVOD and AVOD have proven to be a much better solution to delivering entertainment programming than vMVPDs. The second cycle of content redirection isn't going to gut the traditional distributors. It will gut the vMVPD model as well."